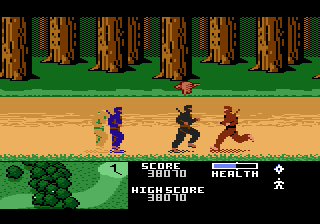 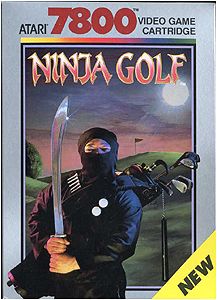 By the late 80’s and onwards into the early 90’s, ninjas were an unquestionable part of pop cultures. From an uncountable number of action movies starring the warriors to the night, to the ultra-popular Teenage Mutant Ninja Turtles animated series, ninjas were absolutely atrocious at not being seen. Video games were no exception, of course, from showing up as mere mooks in Bad Dudes to starring roles in Ninja Gaiden. This particular exclusive to one of Atari’s less spoken of consoles is one of the latter, although it’s… far different in scope, shall we say, then Tecmo’s series.

You take the role of an unnamed ninja, who has spent many long years in training in the hopes of becoming a master ninja. As the manual explains, your master is somewhat crazy, and has thus decided that your final test is to survive nine holes of golf. Not even miniature golf, either, which is sort of a shame, given how much mini golf décor would make for a great boss fight. Your task is complicated, however, by the hordes of rival ninja who want you dead, along with the local wildlife.

Each hole begins with you having to strike the ball with your club. The mechanics here aren’t terribly complex, as it just involves watching the indicator on the minimap and hitting the attack button when the inidicator is where you want it. There’s no power meters, club selection, or wind factor to worry about, so if your timing is good, that’s all you really need. The game also doesn’t particularly care how many shots you take, either, so while you’ll miss out on bonus points, you won’t get penalized for playing particularly poorly, either. The game does take terrain into account, however, as sand traps, water hazards, and rough terrain have their own enemies you have to deal with, as well as limiting the distance you can hit the ball. 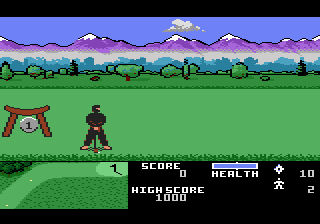 It’s actually getting to the ball once you take a swing that’s the hard part, however. When you’re away from the ball, the game becomes a side-scrolling beat-em-up where enemy ninjas walk onto the screen, forcing you to fight them off as you continually move to the right. Holding down the right button and moving the controller in different directions makes your ninja do different kicks, which hit in various positions. Standing still and holding the button will instead make him throw shuriken, which come in a limited supply, but are handy at taking out enemies from a distance. Once you reach the point where the ball landed, you take another swing.

Most of the enemies you fight are ninjas wearing different colors, although they all generally fight the same. Some are a little faster, while others are nearly invisible, but they all just run up to you and try to kick you. Besides the ninjas, every type of terrain has a different animal who wants to take you down, like egg-dropping birds in the forest, mud-slinging gophers in the grasslands, or giant frogs in rough terrain. (What’s the deal with ninja and giant frogs, anyway? Even a game like this manages to get that part right, somehow.) Every enemy dies in a single hit, which makes it so it’s easy to keep moving forward without wasting too much time on a single screen. The hit detection feels a little suspect at times, however, especially when you’re dealing with shorter enemies.

The real difficulty comes from the fact that they’re constantly spawning from both sides of the screen, surrounding you form both sides. It’s a pretty common occurence to get sandwiched by two or more enemies, who will quickly whittle down your health before you have much time to react to it. It would definitely help if it weren’t so easy to waste your long-range shuriken so easily, since the time you have to hold down the button to throw them is incredibly short. There’s a few powerups that help, like smart bombs and temporary invincibility, but it doesn’t do much to deal with what’s basically a constant attrition against your health bar.

Your goal for each hole is to just reach the green, as the game doesn’t even give you the option of trying to get the ball into the hole. Each hole is guarded by a boss dragon, however, who will float back and forth, shooting fireballs at you while you try to throw shuriken at it. Pretty much every boss fight is functionally identical, however, except that each boss moves a little faster than the last. If you can do this whole routine nine times without running out of lives, you win the game. Once you’ve gotten past the initial concept, you’ve seen pretty much everything the game has to offer in the first few stages.

The game’s biggest problem is that neither the golfing or the fighting is realized especially well. Hitting the ball generally only determines which terrain you go through and for how long. It never really feels like it gives you much of an advantage in the beat-em-up sections, which are generally never too exciting, either. The whole game is generally a little too simplistic to hold much interest, at least, once you get past its goofy concept. It’s hardly terrible as it is just annoying, especially when a few easily fixed control issues would have gone a long way.

The graphics are pretty all right, with big, chunky sprites that animate fairly well. The backgrounds aren’t anything special, though, especially since you’ll see all the terrain there is to offer by the third hole. It does make use of some nice parallax scrolling, though, which wasn’t something you saw with this particular hardware. The sound effects are rather staticy, and the only music is made of short jingles that play at certain points throughout the game. The fact that the game uses the Jaws theme when you go underwater is forgivable, since this was 1990.

Overall, while the initial concept makes the game worth playing at least a couple of times, there’s just not much actual substance to sustain a game. It’s repetitive, difficult to play, and doesn’t really do much with its actual concept. It is, however, rather ahead of its time, given the resurgence of popularity ninjas would receive from silly teenagers on the internet. It’s hardly a terrible game as it is just mediocre, as it doesn’t really do anything with its unusual concept. You would probably be better off picking up two Atari 7800s, with one playing the 7800’s port of Kung Fu Master, the other playing Mean 18 Golf, and switching games periodically as you play.

Speaking of the internet, however, there’s a Flash-based remake of this game, which can be found on I-Mockery. It’s more of a recreation than a straight remake, as the graphics have been entirely redrawn in a more “Flash-esque” style. The basic gameplay concept remains the same, although the remake is nice enough to add mercy invincibility when you take damage. While it’s a pretty decent diversion that improves on the original game in a couple of ways, it’s still rather amateurish, especially with how the graphics have been redone. It also, for whatever reason, uses a metal remix of the boss theme from Sonic the Hedgehog 2 when you face a dragon.