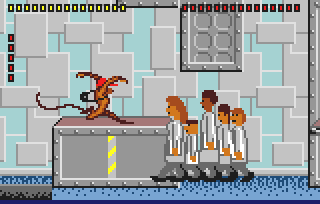 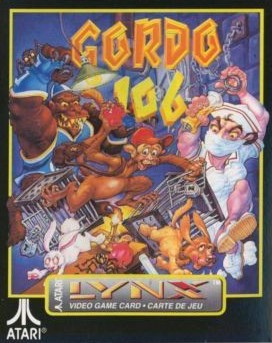 The golden era of the late 70s and early 80s was ruled by Atari, with them and other publishers often coming up with increasingly ridiculous ideas for video games. Of course, with anything innovative there’s a hazy line between “clever” and “stupid”. That very notion ran through Atari’s lifeblood up until the days of the Lynx, although most of its original endeavors fall into the latter category. It’s hard to tell which it lamer: Kung Food, which is exactly as it sounds, or Gordo 106: The Mutated Lab Monkey, which is sadly the closest thing the Lynx had to a mascot platformer. 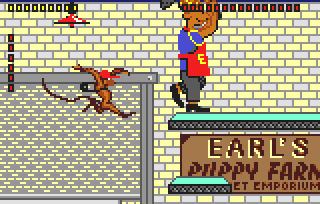 The story is that Gordo (which means “fat” in Spanish) is a monkey trapped deep within the labs of N. Human, whose name sounds like a rejected Crash Bandicoot villian. Gordo ends up drinking an “experimental nuclear potion” that gives him the intelligence to escape the labs (you know he is smart because he is wearing a hat and carries a purse?), freeing other trapped animals along the way. The anvillicious way the game phrases the plot in the intro scene makes it sound like something PETA would come up with if they were making games back in those days. The worst part is that it plays like one, too.

The game is split into six levels with three sub-stages each, with each level being a different part of N. Human Industries. You’re not just running through labs though, with inexplicable levels like fashion shows, hunters conventions and puppy farms. The problem is that each stage is more of a graphical reskin instead of really adding any new tricks or level gimmicks. There are also a lot of caged animals laying around the levels, but they’re only good for bonus points and can be skipped entirely, kind of undermining the moral of the game, if it indeed had one. The animation is one of the most amusing parts of the experience, as watching Gordo wildly flail his arms as he runs is a sight to behold – for a “genius” monkey he still looks incredibly ridiculous. Also, if you cross the finish line of a level, any of the oddly animated enemies will fall right off the screen as Gordo does his victory dance, as if they had simply given up. Truly perplexing.

Probably the most interesting (read: annoying) feature of the game are the giant holes plastered everywhere. Instead of killing you like the bottomless pits in nearly every other platformer, it’ll instead drop you into one of the giant medieval dungons inexplicably under N. Human Industries. There’s several of them, and it seems to be random which ones you’ll go every time you fall in a hole. Some of them are full of fruit and caged animals, and some of them will drop you in a room full of instant-death flame jets that burn Gordo into a pile of ash, morbidly enough.

To be fair, as a game, Gordo 106 is only sub-mediocre, which is a compliment as far as Lynx games go. The cramped resolution makes it hard to get a grip on your surroundings, but there’s little more than simplistic platforming chllanges and brainless enemies. It’s technically playable, though, and with enough practice it’s possible to reach the ending, where all of the freed mammals dance on the rooftops and the local city puts on a fireworks display in your honor. Is it worth it? Probably not. But if you can’t laugh at a monkey falling into a hole at a fashion show and ending up in a stone dungeon full of flamethrowers and lava, maybe kusoge just isn’t for you.