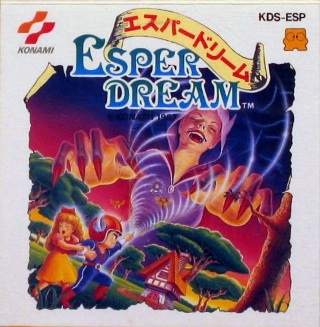 During the 80s, the Japanese had a strange fascination with Espers – people who could use extra sensory perception, or ESP – and thus there were handful of manga, anime and games featuring this theme. Among them is Konami’s Esper Dream, where you control a young boy who has been transported into his favorite book. In this alternate universe, the denizens of Brick Town are in peril, as great evil is terrorizing the land, and the mayor’s daughter has been kidnapped. You, the great outsider with apparently incredible power, are equipped with some measly equipment and tasked with saving her. 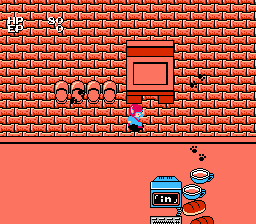 Coming at the head of the Famicom RPG craze that resulted in the wake of Dragon Quest‘s success, Esper Dream is obviously inspired by such games, but tries to do something different with them. For starters, there is no concrete overworld – instead, Brick Town is the center of the game’s universe, and you can warp to various worlds through various grey houses. Technically you can go to the later stages right at the beginning, although this is not recommend, since you will not only be lacking vital items, but will be crushed by the enemies. Instead, there is a specific order you’re supposed to conquer the sub-worlds, allowing you to properly equip yourself for the boss fights. Each world contains a handful of sub-dungeons, which are small mazes that house various important items. It’s not necessary to explore all of them, but it does help.

Unlike other RPGs, Esper Dream does not stick to the standard medieval fantasy tropes, but since this all happens in some non-descript book, there’s no real cohesive theme to much of anything. The first world, for example, takes place in someone’s house, although the surroundings are very large (or perhaps you are very tiny), and the sub-dungeons requiring delving into computers, where the walls consist of computer chips. There’s a standard RPG-type field, with green fields and blue oceans, along with a crystal castle, a maze of swamplands, and a world based on chess. Enemies include ladybugs, flying fish, mosquitoes, winged monkeys, pelicans, house plants, Gradius-inspired ring spewing Moai heads, and other random assortments of nonsense, which appear to be based on whatever the sprite artist felt like drawing that day. 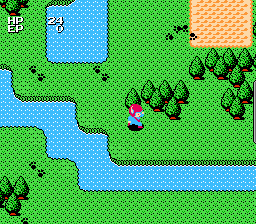 When walking around each area, you’ll see various footprints roaming around. These represent enemy encounters, which will whisk you away to a separate screen to do battle. Unlike Dragon Quest‘s menu-based battles, these are small action sequences fought in real time. Here, you can attack with either your standard weapons – which include water pistols, lasers, and bazookas – or various esper powers, which drain your EP. Since you’re fighting in an enclosed arena, you cannot directly run away, although you can escape if you find the proper hidden block and shoot it. Killing enemies will grant you experience, which in turn will extend your HP and EP when you level up. Enemies will also occasionally drop gold, which is used to buy different weapons. Although you learn ESP powers naturally through leveling, you can also purchase various spells in advance, although it’s a waste of money in the long run. 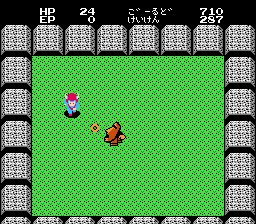 Still, Esper Dream is held down by many of the issues that plague 8-bit RPGs. Enemy attacks are constant, and despite the many palette swaps, there are only a few different types of foes. Even with the more powerful weapons, enemies can sometimes take way too many hits to kill, especially near the end of the game. Most items are extremely expensive, and the grinding will ensure that combat quickly grows tedious. There are no health restoratives that you can carry around – they will be dropped by defeated foes on exceedingly rare occasions, but until you get the healing power later in the game, the only alternative is to traipse slowly back to town, saunter to the inn and retrace your steps. The action itself is also quite clumsy – you can only move and attack in the four cardinal directions, and rather slowly at that. Your gun’s attack is also slightly off-center, making it difficult to align your shots, although perhaps this just following the old action JRPG standard of attacking enemies off-center, like in the Ys games.

The game isn’t technically all that large – there are five worlds, each are only a few screens in size, and the sub-dungeons typically aren’t very big either. There are also numerous smaller towns found in each world. However, the excessive combat and slow walking speed ensure that it’ll take at least a few hours before you can get to the end. It also makes you flip the disk every time you enter Brick Town, and the loading times are more annoying than the average Disk System game. 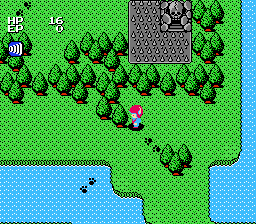 In spite of its many flaws, there’s still a lot to admire about Esper Dream. The fact that it moves away from turn-based combat makes it fairly unique, even though it’s not executed as well as one would expect from Konami, and the fact that there are no random battles is also quite progressive. The large sprites aren’t exactly attractive – the spiked helmet you don when you leave town looks flat out absurd – there’s also a huge step up from the square 8×8 tiles in most similar games. The music, while not outstanding, is pleasant enough, although there’s not a whole lot of variation. It’s interesting to see a different branch of the Japanese RPG evolution, even though, like many other 8-bit entries, requires a ton of patience to actually enjoy. There is also a fan translation by Mute, allowing English speakers to more easily enjoy the game.