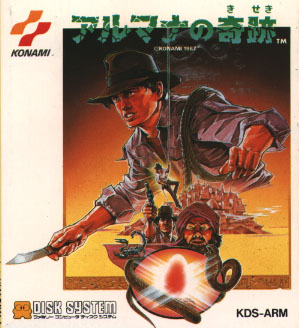 Almana no Kiseki is a sidescrolling action game that takes part of the action of Castlevania and combines it with Bionic Commando (which, in 1987, hadn’t been released yet), and then steals its setting almost piece-for-piece from Indiana Jones and the Temple of Doom, right up to the quest to find a purloined magical stone for some deprived village. You play as an adventurous outsider named Kaito, who comes equipped with a fedora, an expansive arsenal of weapons, and a grappling hook unfettered by adherence to physics. 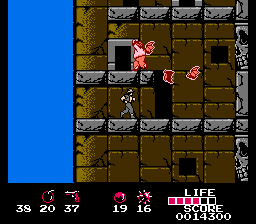 The hero can use one of six weapons – throwing daggers, bombs (which can explode on command), pistols, bolas (which are tossed upward at an angle), gems (which damage everything on the screen), and spiked balls (useful for breaking open certain walls and floors, which are, in true Metroid fashion, indistinguishable from non-breakable walls and floors.) You can select between any of these weapons at any time, but the problem is that each one is limited in quantity. 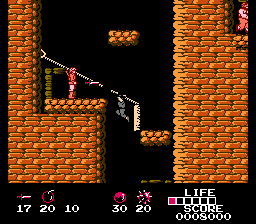 This is quite troublesome considering that enemies, including the usual human foes but also spiders, snakes, skeletons, and bats, infinitely respawn from various holes in the background. You can try to dodge them and conserve your arsenal for the boss creatures, but it’s a smarter idea to just explore each stage thoroughly to stock up on extra weapons. Although each level is technically linear, there are usually a few branch off points that lead to dead ends, but these usually have some worthwhile power-ups along the way, especially ones that extend your life bar. 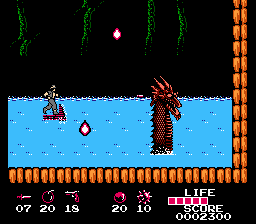 To aid in your exploration, your hero also has a grappling hook, activated by pressing Up and B, which tosses it at an upward 45 degree angle. Once hooked, it’ll stick in place, allowing you to jump on or off, or to climb up to the next platform. Toss another rope and your previous line disappears. 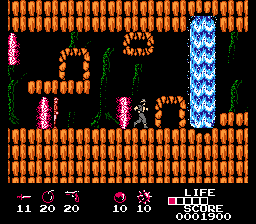 This is basically an expansion of an idea from an early Konami arcade game called Roc’n Rope. It’s no real problem to use when traveling short distances, but nearly all of the levels call for some skilled use of the hook, and this is where things get confusing. One would think that you’d need to jump and toss the hook at the peak of your leap, but no. Instead, you’re supposed to throw the line and then jump, as the hook will ascend with you. This is the best way to obtain maximum height, despite how counterintuitive it feels. 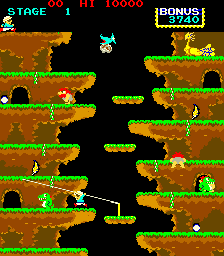 Not only is this a smack in the face of physics, but it feels horribly unnatural. You’ll undoubtedly spend far too long just trying to conquer simple obstacles, all while taking damage from the nonstop horde of enemies as they continue to sap both your strength and your weapon supply. Plus it takes a bit more than a full second for the hook to fully extend, making it quite hard to time your grapple. 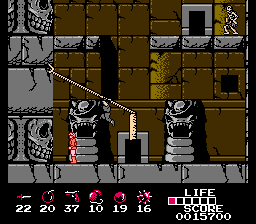 Theoretically you can save yourself from falling and grab onto a platform at the last moment, but it requires a sense of awkward timing that’s quite baffling to get down. Good luck, also, trying to jump on some of the moving platforms, because the game physics just can’t seem to handle that either, and even the simplest of jumps can become huge hassles. There’s one specific section where you need to climb a gigantic shaft while leaping on platforms that are moving up and down, and it’s just so much harder than it needs to be. Worse still, the mechanics are more than a bit glitchy, as sometimes you can swear the hook is hitting a platform but just goes right through it, or you can just pass through the wall to your death. It’s all quite frustrating and moments like this really hurt the game. 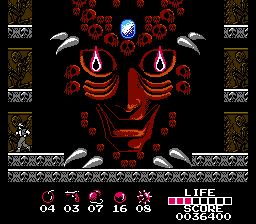 It takes some getting used to, and more than a fair bit of patience (and forgiveness), but once you’ve practiced you can find yourself becoming an expert, and traversing most of the stages becomes far simpler. With some strategic weapon conservation, as well, you’ll probably find most of the bosses – which range from hydras to giant spiders to wall-burrowing, rock-spitting squids – to not be terribly difficult. 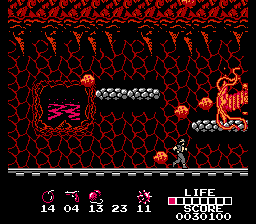 As is typical of Konami during the era, the game has a remarkable soundtrack, whose only downfall is that there’s really only a handful of tunes set across the six stages. The main theme (played in the first stage and beyond) is remarkably catchy, and the extra FM sound channel of the Famicom Disk System provides a fuller texture than is typical of most early FC/NES games. The music is composed by Kinuyo Yamashita, who also did Castlevania, Esper Dream, and King Kong 2 for Konami. Great stuff all around. 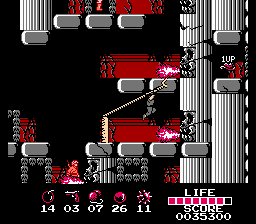 While it’s initially quite aggravating, Almana no Kiseki has most of the essentials of a lost classic, and it’s way better than ever later games like Kaga Create’s similar themed PC Engine title Fausseté Amour.