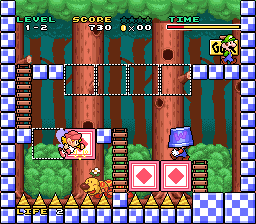 The mouse controller for the Super Nintendo is seen as synonymous with Mario Paint. This is pretty much a given as the mouse was a pack-in with the painting program and the controller didn’t see too much support outside of mostly a handful of light-gun shooters and computer ports. At least that’s the case in the West. In Japan the peripheral saw many exclusive point-and-click titles that kept the device from collecting dust so soon. Curiously, The Big N themselves didn’t capitalize on utilizing the mouse too much as the company only published 5 titles themeselves that were compatible – a number that matches the amount of games that used either the Super Scope or the Zapper despite the mouse being compatible with over double the amount of titles worldwide. Stranger yet, one such mouse game, for reasons uncertain, never saw a release outside of Japan.

Still fresh off of his debut of Super Mario Land 2: Six Golden Coins, Wario is back still as the crazed cock-eyed anti-Mario villain before slowly becoming the lovably greedy jerkass anti-hero, occasional-villain, and microgame developer of today. Still angry after his humiliating defeat from Mario’s Castle in Land 2, Wario flies by in his plane and drops a cursed bucket on Mario’s head, one that he can’t removed on his own. Unable to see where he’s going, Mario blindly wanders into potential danger, only guided and helped by a friendly fairy named Wanda, using her magic wand to bop threats away and create or remove blocks to safely lead Mario to Luigi so his brother can remove the bucket for him. 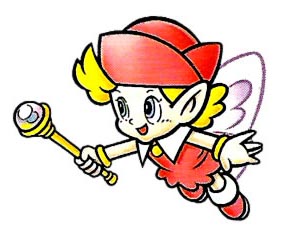 Mario & Wario plays akin to Lemmings with only one large lemming to watch for, almost akin to an old cartoon standby of a baby or sleepwalker walking in a construction yard, needing a well-timed I-beam walkway to prevent injury. While actions can not be assigned to the blind walking character, players must control Wanda with the mouse to keep the pathway clear of deadly pitfalls and enemies and reach Luigi before time runs out. Though Mario takes center stage, players can also choose between a slower-walking Princess Peach or a speedier Yoshi before the beginning of each world. The bucket on top of the victim’s head changes with each world, ranging from a Yoshi egg to a green pipe to an octopus to a Piranha Plant. Strewn throughout each stage are 4 stars that earns the player a 1up for collecting each one, though many are placed out of the way or completely missable past a certain point. Also stashed away on certain stages are 1up mushrooms, standard red mushrooms that add more time to the clock, and coin blocks to bonk away at for points and a free extra 1up with 100 collected in true Mario fashion.

The levels start of easily as one-screen jaunts to large-scale perilous treks with spikes, bats, Pidgits, firey sparks, and fireball-spewing cannons to contend with. Conveyor ladders, springboards, gooey traps that slow you down, and many forms of blocks get thrown in over time. The blocks that Wanda can interact with range from simple on-and-off spaces, timer blocks that only last a couple of seconds, breakable blocks that may or may not need smashing, and more. A quick bang on the bucket can quickly turn Mario & co. around, but he or she never stops walking in their direction. Fortunately, they halt for a brief second when they’re standing on the edge of a block, giving just enough time if another block needs to be placed before or under them, and he or she can not die from any plummet that doesn’t lead to spikes, though a far enough drop will stun them. Luckily, it’s rare that the player will be left stuck if they mess up, only losing time on the clock that becomes precious in the late stages. After a block of 10 levels is complete, Wanda gets to have fun in a minigame by clonking Wario on the noggin with a mallet as he flies by in his plane, earning coins for each bonk. A solid build-up of lives in the early levels becomes a helpful buffer for the end of the game when earning new lives becomes a great hassle and mistakes begin to pile up. Should the player complete all 100 levels and turn the bucket on Wario’s head, an EXTRA set of 10 super-hard levels open up, and they show no mercy. 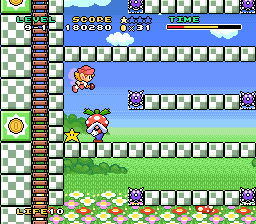 The graphics are colorful and the music is upbeat. For 1993 SNES visuals and sound though, they’re nothing special, but they get the job done by making each object pop out. For a puzzle game, this isn’t a major issue, but for people expecting another major Mario title to go along with their copy of All-Stars might be shocked to see a game that looks and sounds two years behind. The aesthetic itself uses black outlines, going against the look of Super Mario World even though many trappings from that title along with Land 2 are peppered in the backgrounds. A few humorous animations are in play in places, like Wario becoming soot-faced after his plane exploding or Peach holding her dress as she falls.

The peppy music does become grating after a while, especially 8 to 9 levels in and possibly restarting over and over. Junichi Masuda’s score chooses not to ape Koji Kondo’s style, using a soft woodwind-based breezy soundfont for most of the tunes, fitting for the slower pace of the action titles, though maybe not what gamers would expect coming in expecting the next in Mario’s action line.

Controlling Wanda with the mouse works pretty well and relegates all actions from the menus and gameplay with only a left click with the right button serving as the pause feature. You may want to set yourself with the most optimal settings in-game and out with the correct positioning and pad of your choice before you take on the hectic design of the later levels though, and make sure the old ball inside the mouse is nice and clean. The only issue is hitting the tiny blocks with pinpoint accuracy, especially within moments when the game throws a row of blocks to be placed, timed or no, under Mario & co.’s feet as they step on them block by block, where a misplaced click can accidentally flip the buckethead wanderer in the wrong direction and plummet to doom or run into a baddie hot on their trail. 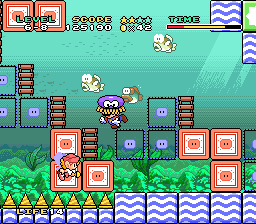 Mario & Wario only saw release in Japan, available with the game only or with the mouse controller and pad for those who haven’t picked one up with Mario Paint prior. The game would see previews in magazines in North America like Nintendo Power and was listed as one of the prizes people could win in a Kellogg’s cereal contest in Canada. However, unknown factors such as marketing or other costs seemed not in alignment as the Western release never came to pass, despite the game itself only containing English throughout. It’s a shame since it would have been a big-name title that could’ve helped maintain a use for the SNES mouse, though later on the US-exclusive light-gun game Tinstar published by Nintendo was compatible as an alternative to using the Super Scope. As for Wanda, she made a small cameo with a radically different design as a tiny helper in both versions of Wario’s Woods. Aside from that, she made a brief appearance in the long-running manga Super Mario-kun in a volume based on many spinoffs of the mid-90s era. Furthermore, the concept of the gameplay would be later expanded with touchscreen controls in the Mario vs. Donkey Kong series, leading wind-up toys to a door. A reference to this game would make its way into Pokémon Red / Green / Blue / Yellow and their remakes, as the TV in Copycat’s bedroom in Saffron City has a Super Nintendo hooked up to it and mentions displaying Mario with a bucket on his head. Super Smash Bros. Melee also contains the bucket as a trophy. 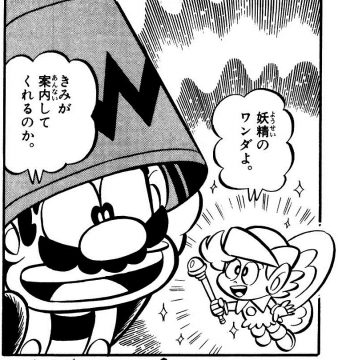