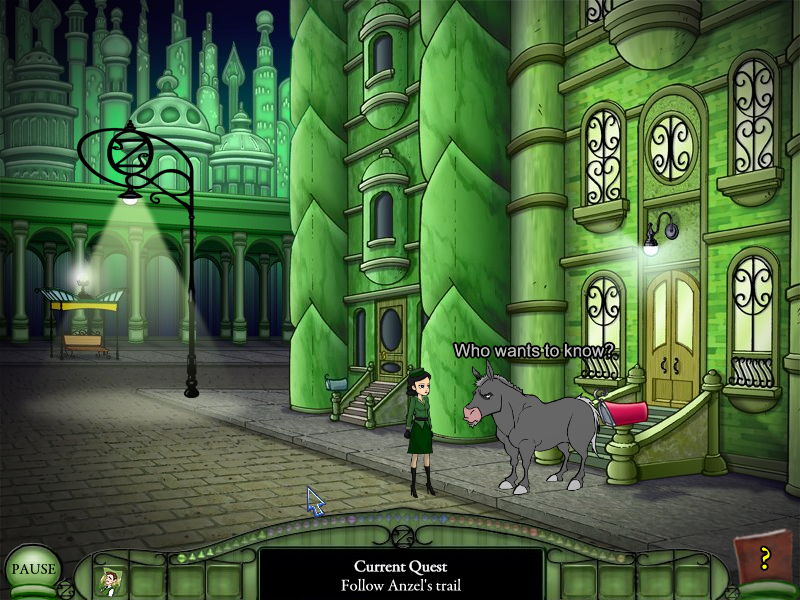 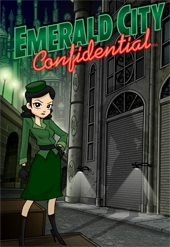 The Wizard of Oz has been a gold mine for alternate interpretations. Beyond the world famous 1939 film, there have been numerous adaptations to stage plays, cartoons and television series. From a video game perspective, there’s an early text adventure for various home computers, a bog standard side-scrolling platformer for the SNES, a Japanese fantasy RPG for the DS (RIZ-ZOAWD, known as The Wizard of Oz: Beyond the Yellow Brick Road in America), and a Castlevania-ish hack-and-slasher for the PlayStation 2 (OZ, known as The Sword of Etheria in Europe). With all of these somewhat off-kilter reimaginings, it almost feels like Emerald City Confidential, Wadjet Eye’s detective noir take on the world of Oz, is the least crazy of the bunch.

The heroine is Petra, a down-on-her-luck ex-military woman who’s taken to the private detective business in hopes of finding her missing brother. She is propositioned by Dorothy Gale (yes, that Dorothy) to find her missing fiancé?, a man by the name of Anzel. As to be expected, the story goes much deeper than a missing persons case, as soon Petra learns that the entire kingdom of Oz is in a state of unbalance due to the deaths of the witches. (Most will remember the famous “I’m melting!” death of the Wicked Witch of the West, but Glinda the Good Witch has also passed away sometime in between.) Only by resurrecting these fallen figures can the magical power of the kingdom be restored, and help stave off a war with the Phanfasms, a race of savage beast-humans. 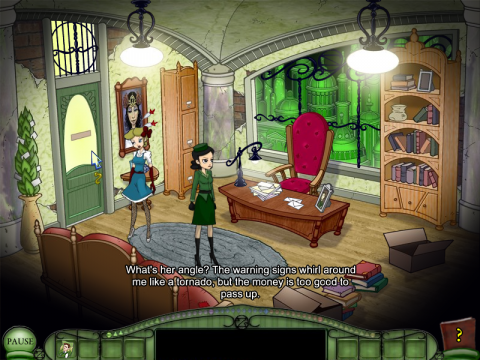 The major of appeal of Emerald City Confidential is seeing how all of the famed characters from the Oz universe have been reinvented. The Lion is now a high powered lawyer who works for criminals. The Tin Man is a cynical drunk. The Scarecrow is an enigmatic royal advisor clad in a classy white suit. The Wizard of Oz has been reduced to coaching magic fights at a low class coliseum outside the city. While most will be familiar with the characters from the Judy Garland film, Frank L. Baum wrote over a dozen books set in the same universe, and Emerald City Confidential makes good use of them. The city is ruled by Queen Ozma, and her police force is led by Jinjur, who has a long standing grudge against Petra. The Nome King is now a (mostly) reformed barkeep, Jack Pumpkinhead is a smuggler, and the Shaggy Man is a mechanic. Transportation is handled by flying creatures called Gumps, which here have a head of an elk and the body of a sofa. Petra, on the other hand, is an entirely original character, which works in introducing unfamiliar players to the expanded universe of Oz. There’s a good amount of exposition to play catch up for the major events of the novels, and the numerous supporting characters are amusing enough to stand on their own without being familiar with their backgrounds. It’s not like it matters in most cases – while some characters are similar to their canon counterparts, many others are the same in name only. Longtime fans will either be amused or horrified at their reimaginings.

While most other Wadjet Eye games go for a classic early 90s look, Emerald City Confidential is much more modern, using high res artwork and a bright, cartoony style for its characters. In general it looks fantastic, although the animation is underdone. It uses a single icon interface, and it’s extremely quick and easy to traverse the city. 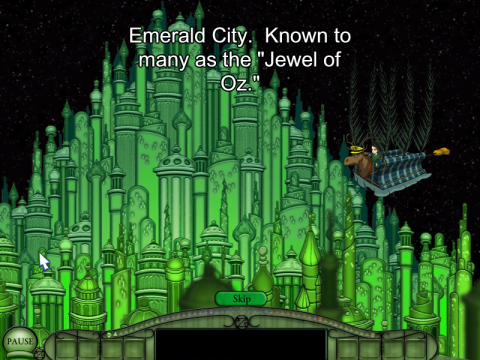 While Emerald City Confidential gets points for its trying, on some level the very concept of a cartoony noir story just doesn’t quite work. Sure, from a storytelling standpoint it hits most of the high notes – Petra is a down-on-her-luck outcast, the entire story takes place at night, and the land of Oz is basically ruled by criminals. It is, of course, somewhat sanitized, because while there are references to violence and drugs, it’s all handled in a very Disney-esque way. But one of the major aspects of noir is its atmosphere, something that’s practically impossible to replicate when the heroine, not to mention the whole city, is sparkling green. When you remove the darkness from noir, it really can’t be noir anymore, and so much of the appeal is lost. Furthermore, while Petra is a decent leading lady, she doesn’t quite have the personality of other video game noir heroes like Tex Murphy or Max Payne. She is self-conscious about her hat, but that’s really about it. Of course, Baum’s books were meant for children and it seems like this game is too, so it’s likely the target audience won’t even notice.

Published by casual gaming portal PlayFirst, Emerald City Confidential is clearly meant for people who have never played an adventure game before (or perhaps, any game before), because it’s one of the easiest ever made. At practically every single step of the investigation, you are alerted of your next goal in gigantic letters, which is then displayed at the bottom of the screen. These goals aren’t always even puzzles, as they tend to be a “talk to this person” type of task. When you do this, you’re congratulated with more gigantic letters and awarded gems, which denote your progress. There are hidden buttons around the city, which can be exchanged for concept art. There are also in-game console-like achievements for clearing certain goals. To a newbie, these will be likeable signposts – to anyone else, it can’t help but feel slightly condescending. The puzzles that are present aren’t even particularly difficult – although the magic fight against Mombi the witch is amusing – and there’s a built-in hint function as well. 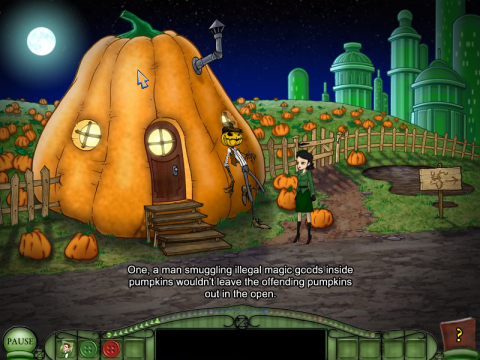 While the interface and puzzle solving talks down to the player, thankfully the rest of the game doesn’t, and the story is still fairly decent. It’s definitely a cute and likeable game, and its concept is strong enough to make it worth playing through even for veterans. But it can’t help but feel like something’s missing. A huge chunk of the game is spent clicking through dialogue – dialogue that’s well written and very well acted, but there’s barely any exploration or puzzle solving. For as pretty as the backgrounds are, there are very few hotspots, and the non-dialogue narrative text isn’t even voiced. As such, it really requires that the player puts themselves in the role of a novice gamer in order to fully appreciate.