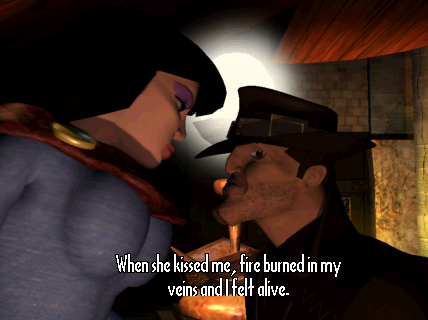 The third (and final) Discworld graphic adventure is a marked departure from the first two. While those were at least partially based on elements of the novels, Discworld Noir is a completely original work, one which re-imagines the city of Ankh-Morpork as something out of a Raymond Chandler novel. The protagonist is a new character named Lewton, the city’s first private investigator and former member of the City Watch. He’s the typical noir hero – a down-on-his-luck cynic with a penchant for eloquently depressing metaphors. The game begins as he’s chased through the streets, and eventually murdered by an unseen assailant. He’s not quite dead, obviously, as he begins relating the events that led to his apparent demise. It started a week ago in his office, as he’s approached by a luxurious dame named Carlotta who asks him to investigate a murder. Things can never be that simple, though, as Lewton finds himself entangled in a wider web of killings, conspiracies and mysterious artifacts. It’s much darker and far less wacky than the other Discworld games, that’s for certain. 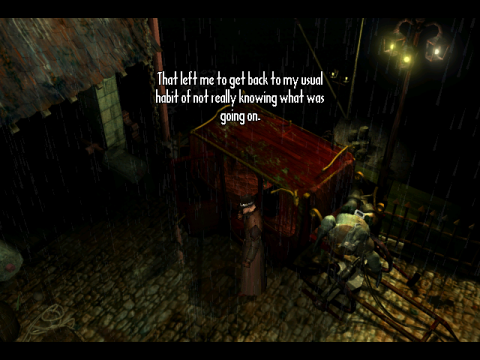 The visuals, along with the story, have received a drastic overhaul. While the game is still 2D, all of the graphics are CGI. Lewton is the only polygonal model rendered in real time, as all of the secondary characters are pre-rendered, an effect that actually doesn’t look as bad as it sounds. The models aren’t great, but since they’re usually so shadowed in darkness it’s hard to complain, and the perfectly recognized hard boiled stylings overcome any technical deficiencies. The backgrounds come off much better though, and there are tons of cinematics that blend together with the action and flesh out the city. The atmosphere is heightened with an appropriately jazzy ’30s era soundtrack, complete with liberal brasses and piano. Every time you find an important clue or a new location, a few chords strike dramatically, an effect which maintains its intensity even in the final moments of the game.

It’s true that Discworld Noir has some commonalities with the Tex Murphy series, as both are brooding detective mysteries with a bit of a comedy bent. But Discworld Noir effortlessly weaves in elements from Pratchett’s books which give it a life of its own. Despite styling itself after 1930s America, the medieval atmosphere of Ankh-Morpork really doesn’t feel all that out of place. The city actually feels a bit more interesting now that it doesn’t rely so much on high fantasy tropes, and the traditional noir stories are a lot more interesting when you’re dealing with dim-witted trolls, obnoxious dwarves and sarcastic, piano playing vampires. 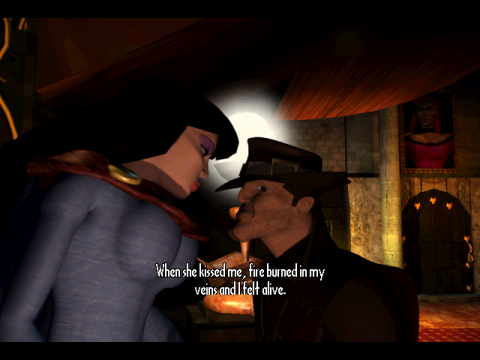 Although most of the major characters were invented for this game (and never appeared in any of Pratchett’s novels), there are a couple of familiar faces, including Captain Vimes and Nobby of the City Watch, as well as Gaspode the talking Wonderdog, the quirky inventor Leonard da Quirm, and, of course, Death. Beyond the usual Discworldreferences, though, is an overt love for, obviously, numerous noir films. The story of Lewton and his lost love Ilsa is taken directly from Casablanca. Al Khali the dwarf and Jasper Horst the hulking troll are direct parodies of Peter Lorre’s Joel Cairo and Sydney Greenstreet’s Kasper Gutman, respectively, from The Maltese Falcon. Some individual lines are referenced or even quoted nearly verbatim. “Who was what girl?” Carlotta asks Lewton when referring to Ilsa. “The one who left you with such a high opinion of women? She must have been quite a gal.” It’s more or less what Lauren Bacall said to Humphrey Bogart in To Have and Have Not. A lesser work might seem like a lazy rip-off, but in the context of Discworld and its strange inhabitants, it’s a lovingly delicious parody. Plus, while the Discworldnovels have featured numerous characters based on real life people or figures, Discworld Noir sticks in a video game parody with Laredo Cronk, an “upwardly nubile tomb evacuator” and obvious riff on Lara Croft.

Despite the change in setting and tone, this is still very much Discworld, as evidenced by the dialogue. The writing is as funny and snappy as ever, with Lewton holding his own as a main character against more well known folks like Rincewind. Despite his bad luck and generally poor situation, he’s not nearly as incompetent, and he manages to make even the grittiest dialogue genially amusing. His sarcastic monologues and commentary are nearly always colorful, in that grey kind of way. Try examining the bored warehouse guard. “It was the kind of look that could only be achieved by someone whose job was so mind-numbingly tedious that their only pleasure came from being blistering unhelpful to everyone who came along.” His interactions are just as droll. “Mr. Lewton?” Carlotta inquires in his office. “If I’m not, I should fire the guy who painted my door,” Lewton dryly responds. His one weak link, though, is his voice actor. Rob Brydon manages to pull off the lines with an appropriate amount of sarcastic gravity, but his attempt at an American accent just sounds a wee bit off. The rest of the acting is also inconsistent, but generally far more good than bad. 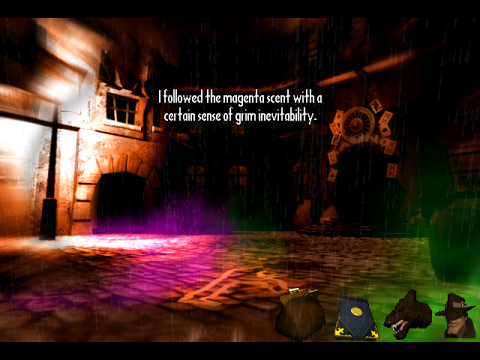 The interface works much like the first two games, with some additions. In addition to the usual inventory, Lewton keeps tracks of various clues in his notebook. These clues are obviously for interrogation purposes, but they also function as useable “items.” When used appropriately, they provoke Lewton to make some logical connection and gain more insight. Additionally, as the lunar symbolism (and cover artwork) suggests, Lewton gets turned into a werewolf about halfway through the game. Here, he can change into lupine form and gather various scents, which appear as colors amidst the grey backgrounds. You can use these colors to follow various trails, or match up identical colors in different situations to uncover their source. While using all of these clues requires a slightly different mode of thinking, the actual puzzles are, for the most part, much easier than the first two games. Indeed, the whole first act consists mostly of interrogating people and gathering clues, rather than actually solving much of anything. When you actually do get to uncovering mysteries, it’s much less obtuse than it used to be, completely doing away with the usual multi-layered fetch quests.

While moving around the city is quick and easy, the interrogation sequences are more complicated than they should be. There’s an icon to introduce yourself, and several context sensitive topics that pop up as you converse. You can also talk about any of the items in your inventory or any of the clues in your notebook. Each of the topics is classified under the various cases you happen into, and uncovering new bits of data will scribble out old ones. Actually finding relevant things to inquire about requires flipping through several sheets of paper, which grows more useless as you progress through the game. Wouldn’t it have been easier to just have a single list of topics like the Gabriel Knight games?

This in itself is a minor complaint. The story is remarkably compelling, full of all of the twists and turns as expected of a plot like this, and the writing is top notch throughout. The only important issues come from the seams in its programming. The game was developed for Windows 95 and 98, but is pretty buggy. It doesn’t even officially support Windows XP, much less Vista or Windows 7, although with some tweaking it will run, albeit with some glitchiness and random crashes. (It won’t let you pick the “Resume Game” option from the main menu either – you have to start a New Game each time, skip through the intro, and load your game from there.) Perfect Entertainment went belly up shortly after Discworld Noir was published, leaving them unable to patch it properly.

The company briefly reformed under the old Teeny Weeny Games label to port Discworld Noir to the PlayStation. While the PC version runs in a 640×480 resolution, the console port shrinks it down by half. Lewton’s character model was downgraded too, although it still looks pretty similar. Due to this version being released on a single CD rather than three like the PC release, both the sound and full motion videos are heavily compressed, and various animations and sounds are cut here and there. But the game still supports the PlayStation mouse, and will run under PlayStation emulators like ePSXe, so it might actually be easier to get working than the PC version. It’s a shame that none of the versions were officially released in North America, since publisher GT Interactive had gone under, leaving it as a Europe only release. 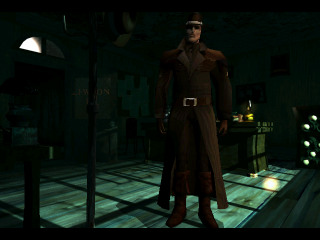 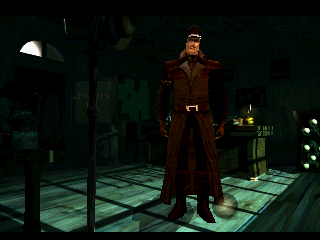