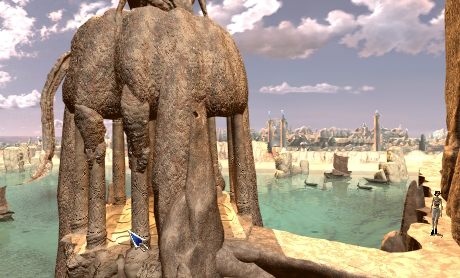 By the latter half of the ‘90s, the adventure genre was on its last legs. By the turn of the century, it was more or less dead. Despite the frustration of its fans, at least it went out with a bang, delivering two world class titles roughly around the same time – LucasArts’ Grim Fandango, and Funcom’s The Longest Journey. Designed and written by Ragnar Tørnquist, The Longest Journey is a fantasy tale that combines classic medieval thematics with elements of science-fiction to create one of adventure gaming’s most well known series. 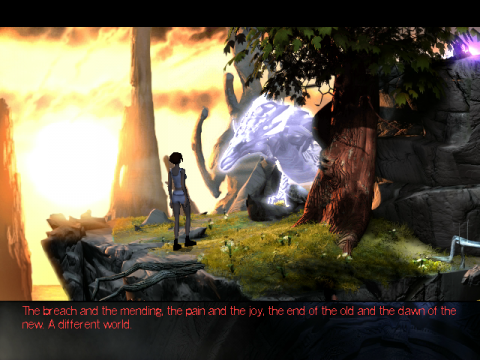 Start thinking of all of the common tropes in fantasy fiction. There’s an evil empire, and the rebels that fight against them. There’s the ragtag group of adventurers who tread through insurmountable perils to accomplish quest. And then there’s the story of a person from the “real” world crossing over into another dimension, the “chosen one” who will save this alternate world from destruction. The Longest Journey takes on all of these (the last one in particular) but weaves them in such a way that it almost completely overcomes its inherent clichés. 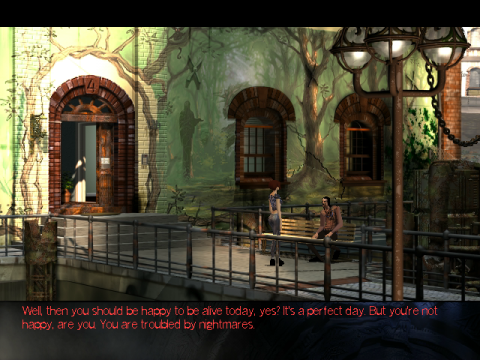 The “chosen one” here is one April Ryan, an 18-year-old girl who flees from her troubled family life to settle at an art school in Venice (not the Italian city, but rather a section of a fictional city called Newport in the United States). She begins having odd dreams of another world calling for her, which get even creepier when said dreams begin bleeding into the real world, affecting everyone around her. Under the guidance of an enigmatic vagrant named Cortez, April learns that she’s a “Shifter” and can transport to this other world. 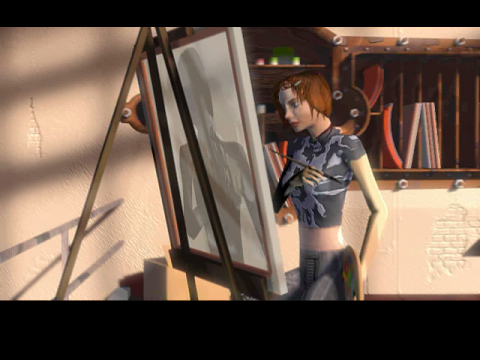 In ages past, the Earth was split into two halves by an alien race called the Drac Kin (dragons, more or less). The “real” world, April’s world, is known as Stark, and is ruled by logic and science. This “other” world, called Arcadia, is comparatively ruled by magic and chaos. The two are held together by a mystical location suitably called the Balance, which is ruled over by a single human called the Guardian. Unfortunately, the Guardian has left his post for reasons unknown, causing both dimensions to collapse into each other, eventually leading to almost certain destruction. April’s goal is to explore Arcadia and find pieces of a missing disc to unlock the Guardian’s realm, and fulfill her prophecy to save both worlds. During her destined journey, she also has to contend with a faction known as the Vanguard. Although they hail from Arcadia, they also have a powerful presence in Stark, masquerading not only as a church, but also controlling a mega-corporation. They have plans to insert their own Guardian into the Balance, and rule the worlds as they see fit. 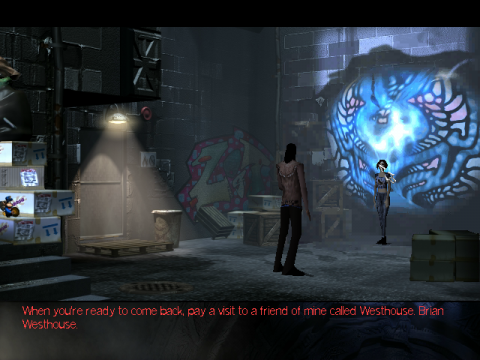 The Longest Journey is broken up into thirteen chapters, as April “shifts” between Stark and Arcadia to fulfill her quest. In Arcadia, she meets up with the various races of the land and befriends them, while in Stark she must somehow infiltrate of Vanguard’s ranks and find out what happened to the proper Guardian. Arcadia is a fairly typical medieval world, filled with strange creatures and possessing a strong fairy tale feel. Stark, taking place in a future several centuries from our own, is strongly influenced by Blade Runner and other dystopic fiction. 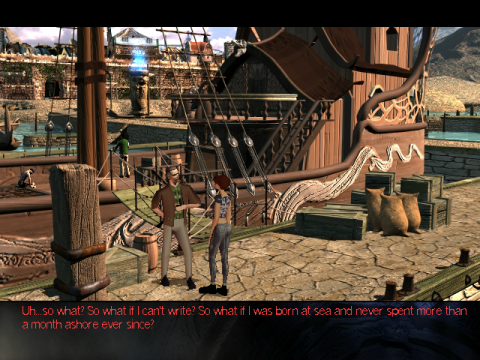 The contrast between the two worlds already provides a unique setting, but there’s an astounding amount of depth to both of them. The Longest Journey beats out the Gabriel Knight series (which Tørnquist has admitted to have been inspired by) for possessing the most expansive amount of dialogue seen in an adventure game. Each race is fully fleshed out, possessing an extraordinary amount of history and culture, and the adventure is full of unique characters. It’s all extremely well written, with just the right blend of eloquence and humor that keeps it from getting too dry. 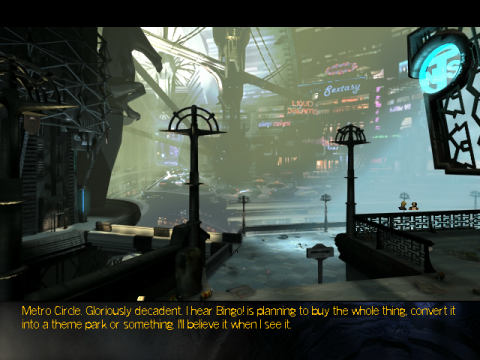 April Ryan is a lively character who initially acts as a reluctant hero, but slowly settles into her destiny. Despite her somewhat troubled past, she’s fairly upbeat, often delivering commentary peppered with pop culture references or responding to dangerous situations with wisecracks. Tørnquist is also a self-admitted fan of Joss Whedon, so April has more than a little bit in common with Buffy the Vampire Slayer. April even self consciously acknowledges her role as a “chosen one”, remarking to a guard: “Don’t you have a prophecy that I can fulfill? Because that’s how this thing usually goes.” About halfway through the game April is joined by a sidekick, a wisecracking (and occasionally obnoxious) bird named Crow who, in spite of his reluctantly yammering beak, faithfully beckons to her call. One of the most memorable characters is Burns Flipper, a raving, paranoid computer hacker with a mouth of a sailor and a fairly lively demeanor, even though he’s missing the entire lower half of his body. His creepiness notwithstanding – before revealing his past, he asks April if she’s a virgin – he’s such a damned weird fellow that it’s hard not to like him at least a little bit. 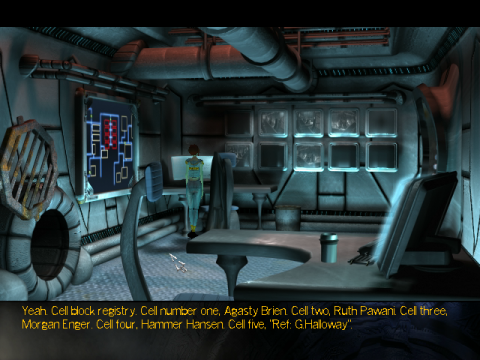 The numerous secondary characters show off various oddball traits, which lead to some somewhat strange, if inventive, puzzles. When you’re tasked with sneaking inside a police department to tamper with some records, you don’t sneak into the place like a spy or anything – instead, you need to waltz through the front door by tricking some union workers into doing their job and distracting a police guard with their own bureaucracy. When tasked with dueling with an alchemist, a rather offbeat but still quite evil fellow named Roper Klacks, you’re given the opportunity to suggest various challenges, each leading to some humorous consequences. Try challenging him to pull a rabbit out a hat and he claims he can pull a hat out a rabbit (it isn’t pretty, he says). Suggest a game of hopscotch and it turns out he was the neighborhood champion three years running. Or even attempt a spelling bee, during which he requests that you spell “Anzhabecquakaleea” (it’s an alchemy term, apparently). They can get tough, but per modern adventure game standards, you can’t die, nor get stuck in an unwinnable situation. 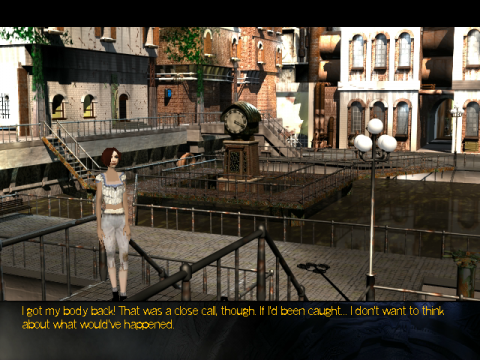 Both these puzzles and the huge amount of dialogue can lead to some sluggish pacing. It’s mostly notable in the beginning, as the world of April and her friends is exhaustively explored for a couple of hours before the story finally kicks into gear. It doesn’t help that these beginning chapters are filled with a bunch of puzzles that feel like artificial roadblocks. Why exactly do you need to fix your apartment’s boiler? Why would anyone think you need to use a duck-shaped flotation device to retrieve a key which is used in a completely different location? Why are you involved in what amounts to an extended wild goose chase just to find a character who hangs out in the most obtuse places, just to be confusing? April even remarks how ridiculous it is, effectively lampshading the whole ordeal, but it doesn’t excuse it. The puzzles become more logical and fitting once you visit Arcadia (ironic, considering Stark is the world supposedly ruled by logic). It doesn’t stop the fact that there’s still lots of pixel hunting, and important objects are often indistinguishable from the background. 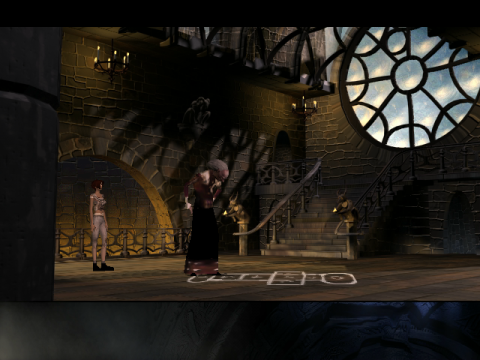 There’s also a rather a nasty habit of telling rather than showing. There’s so much history to both Stark and Arcadia that it’s hard to fully digest all of it when it’s all spoken in huge blocks by characters who amount to little more than expository tools. It’s all fantastic stuff, but it’s very possible to feel a bit of fatigue from all of the chatting. It’s also quite an expansive game, and the title is more than appropriate. The early chapters are fairly long, but at least the pacing picks up briskly in the later half. 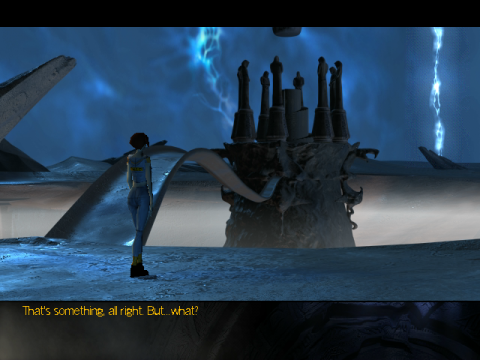 Most of The Longest Journey’s latter-day adventure gaming brethren, like Gabriel Knight 3 and Grim Fandango, tried to integrate 3D graphics into the genre, with decidedly mixed results. In contrast, the interface here is entirely point-and-click, using moody yet stylish 640×480 2D pre-rendered backgrounds. The characters are polygonal though, which really isn’t for the best. At a distance, they look alright, but anytime they approach the camera their awkward appearance becomes all the more noticeable. Some important scenes are rendered in fully animated cinemas, although they don’t really look all that great. 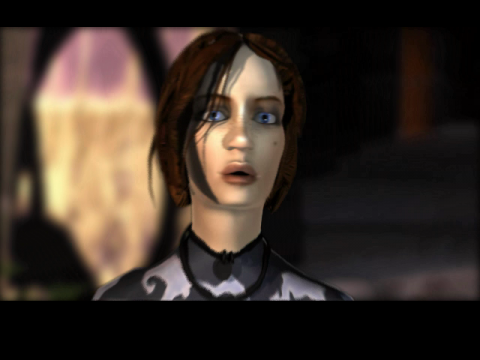 There’s also a handy feature to not only to skip through dialogue, but also fast forward animation by hitting the Escape key. Since there’s a lot of walking around to be done, being able to quickly zip from one side of the screen to the other is a God-send. The voice acting is uniformly excellent, but there’s a distinct lack of music, which makes the otherwise gorgeous world of Arcadia feel rather empty. 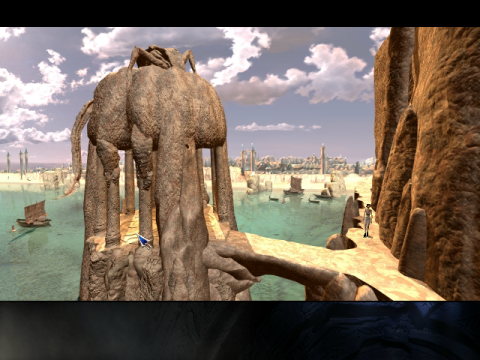 Even though it suffers from the usual obtuse puzzles, in addition to some overly dense dialogue, The Longest Journey is still astounding in its detail, ranging from its expansive world to its remarkable characters. It’s essential gaming for fans, as well as anyone with the slightest interest in fantasy, science fiction, or both.