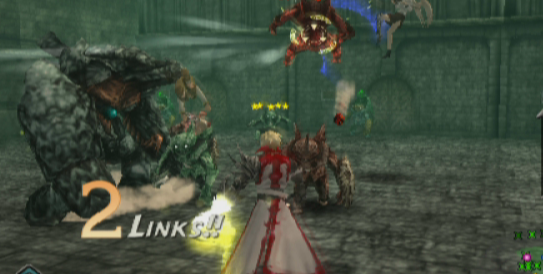 The Sword of Etheria, known as OZ ~Over Zenith~ in Japan and Chains of Power in Korea, was developed by team members from the Suikoden and Castlevania series, and while it was released in Japan, Europe and Korea, it was not published in North America.

For a long time, humans peacefully lived together with spiritual beings known as Katenas. However, a group of mysterious gods have taken over the planet and sucked it of its life force (known here as “Etheria”), enslaving the Katena and using them to subjugate humanity in the process. The player controls Fiel, a human with a mysterious past, whose village falls under siege of these beings. He fends them off, but not before his little sister is kidnapped. He defeats two of the attacking Katena – the scantily clad Almira and fiesty warrior Leon, both disgraced members of OZ, the personal soldiers of the gods – and bands together with them to rid the planet of the attacking menace. 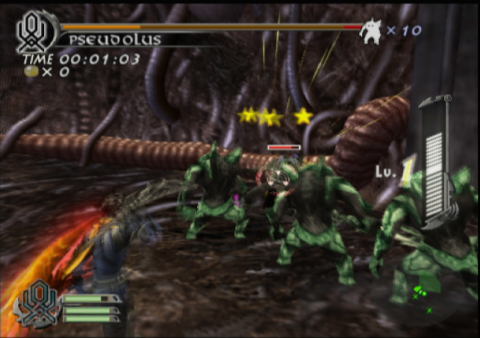 The story is about as stereotypically manga/anime/JRPG as one can possibly get. War against the gods? Check. Life force being drained by an invading entity? Check. Protagonist with an unknown history that makes them essential to the salvation of the earth? Check. It even manages to mangle a work of fiction and make vague allusions without any regard to what they mean. In this case, it references Frank L. Baum’s The Wizard of Oz books, and the parallels are largely nonsensical. It also has a whole “super sentai” theme going for it, given that the characters have unique identifying colors and can (eventually) change into a more powerful form.

The hero of the game, who has a mysterious past. He is known as Feel in the Japanese version, but Fiel in all other versions. His little sister Dorothy is kidnapped, causing him to join the remnants of old Oz to not only find her, but learn his destiny. He fights with an axe that has been transformed into a huge sword, he’s supposed to be the Tinman and his color is red.

This scantily clad lady, one of the original members of OZ, is apparently based on the Scarecrow. She is the most calm and collected of the team. Her color is blue.

One of the other original members of OZ, Leon’s rash and judgmental actions can get him into a lot of trouble, and often results in him getting into fights with Almira. He attacks with a gigantic claw attached to his arm. His color is yellow, and he’s based on the Cowardly Lion.

The original leader of OZ, you control him briefly in the prologue, before he mysteriously disappears. Like Fiel, his color is also red.

One of the new members of OZ, Juju is initially a foe, but can join your squad given the right circumstances. She has wings but can’t really fly, and attacks with a variety of floating daggers. Her color is pink.

One of the other supporting members of the new OZ, Galumn is much like Juju – he is initially a foe, but may join depending on your actions. He has essentially turned into a werewolf, and his color is green.

The new leader of OZ, and the antagonist through a good portion of the game. Naturally, his fate is tied in with Fiel. His color is purple.

This cute little girl gets kidnapped early on, but gets her own short series of chapters as an unlockable bonus. She can pack quite a wallop for such a tiny thing.

Here, Toto is a smiley devilish cat, the kind that seems to know more than he’s letting on. While he only appears on the playable field as a companion to Dorothy in her chapters, during most of the game he simply aids in refining Etheria into items – in other words, the shopkeeper. 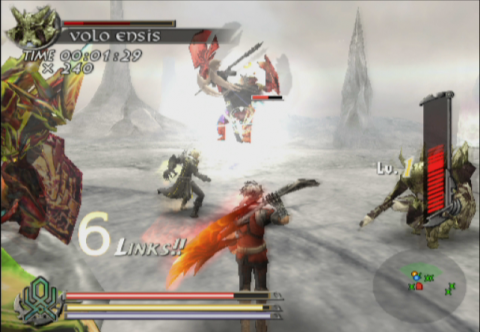 None of this silliness really matters though, because the crux of The Sword of Etheria lies in the combat. Through most of the game, you control Fiel, along with two other party members. On the surface, it’s a 3D action title as is typical on the PlayStation 2, with some unique mechanics. After stunning an enemy, you can either knock them in the air or send them flying forward. This gives the opportunity for one of your teammates to attack and send it flying towards the third party member, who in turn knocks it back to you. You can then continue to play volleyball with the helpless foe until they perish.

As you juggle bad guys, you’ll build up the tension meter, which will allow you to pull off “Deathblow” moves, some of which are executed in conjunction with other party members. (When you build it high enough so all three fighters can join, you can execute super “Over Zenith” attacks, another reference to the Japanese title.) These will drain the tension meter, but will not only attack multiple enemies at once, but will send them flying too, allowing another chain of volleying and therefore rebuilding the tension meter. In addition to the Deathblows, building up the combo meter will multiply the amount of “Etheria” dropped by fallen enemies, which is used as currency to upgrade your characters and purchase stat-enhancing items. 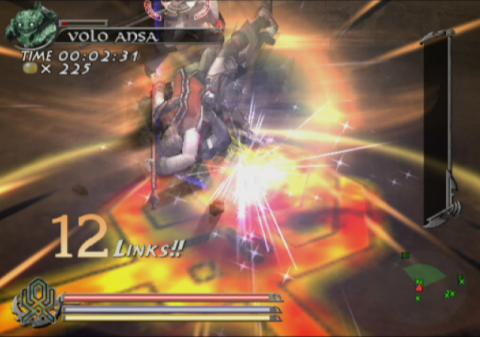 Continuing a chain isn’t quite as easy as it sounds. It requires a constant awareness of your surroundings, which isn’t always possible given the camera, and you need to pay attention to the calls of your teammates, who will shout out who they’re hitting the enemy towards. Furthermore, the controls are a bit on the sluggish side, requiring that you have precise timing or risk fumbling the combo. The slow movement and long recovery times were undoubtedly implemented out of necessity, because if they were as snappy as Devil May Cry, it would be far too easy to abuse and thus totally break the game.

As it stands, though, it’s a totally brilliant system. In most action games, enemies are merely obstacles that stand between the player and their goal. It works the same way in The Sword of Etheria too, obviously, but each encounter also presents itself as an opportunity for a great reward. Keeping up the flow of a huge combo is immensely satisfying, for any number of reasons – for the visceral satisfaction of seeing numerous enemies hurtling chaotically back and forth across the screen, for wiping out a whole swarm of foes in one long, well executed maneuver, and for the tangible benefit of a huge swath of bonus Etheria. 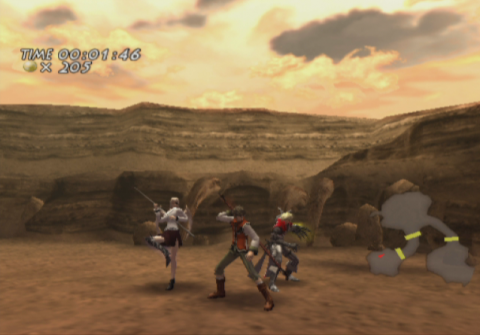 Playing enemy pinball is more or less mandatory. Most waves consist of at least half a dozen enemies, usually more. Some will set you on fire, others will explode if not killed fast enough. Some will chuck rocks at you from off screen, others will walk up and pummel you and your party members for half of your entire life meters. Overwhelming enemies with Deathblows is the only way to counteract this – playing like any other action game is technically possible, but will probably end in frustration.

It does take a little while to get used to fighting alongside two computer controlled companions. Generally they’re good about smacking enemies around as long as they’re even vaguely in the vicinity, although there’s no way to directly control them beyond telling them to attack a specific enemy. Running out of life does not kill you, but rather stuns you, forcing you to mash buttons until you can get back on your feet. The only way to lose is if all three combatants are disabled at the same time. Some levels can last over 20 minutes, and the only checkpoints are in front of boss battles, so losing can get quite annoying. 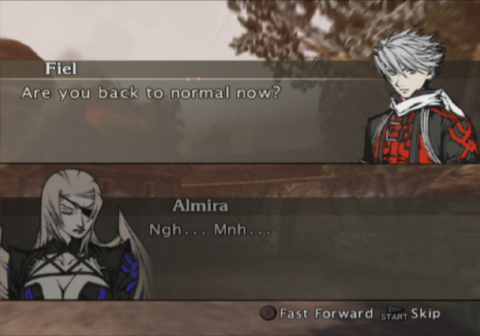 Action titles like Devil May Cry and Dynasty Warriors evolved the arcade beat-em-up formula in various ways, but The Sword of Etheria offers a more literal interpretation. The stages are usually long, stark corridors, and progress is blocked off until the supply of enemies has been exhausted. Other than some branching paths, hidden enclaves and the occasional need for backtracking, they’re usually linear too, with the focus solely on beating stuff up. Still, most stages tend to have some kind of gimmick that keeps things from getting too repetitive. A few levels have pods which can only be destroyed by special attacks. One stage has a collection of torches which need to be protected from an incoming enemy onslaught. The purgatory level is haunted by ghosts, who can resurrect fallen enemies and cause them to come back even stronger – the solution is to either keep them away from the ghosts, or hit them towards the snake-like creatures in the walls, which will gobble them up before they can be brought back from the dead.

Alas, the graphics look pretty awful. Outside of some terrifying looking bosses and a few stages that look like they came out of Contra, the environments are blurry, bland, and ugly. The frame rate tops out at 30 FPS, and there’s often some troublesome slowdown in more harrying encounters, which can totally screw up the timing for combos. The artwork, provided by Fumi Ishikawa (known for her fantastic designs in Suikoden II and III) is uniformly excellent, but while the character models look fine from a distance, they look cheap during the cutscenes. The ugly visuals contrast with the fantastic score by Michiru Yamane, whose uniquely identifiable style of orchestral electronic rock is easily on par with her work on the PlayStation 2 Castlevania titles. The opening theme is an arrangement of Polovetsian Dances by Alexander Borodin, which has also been rearranged and featured in some Dance Dance Revolution games, complete with artwork from The Sword of Etheria. 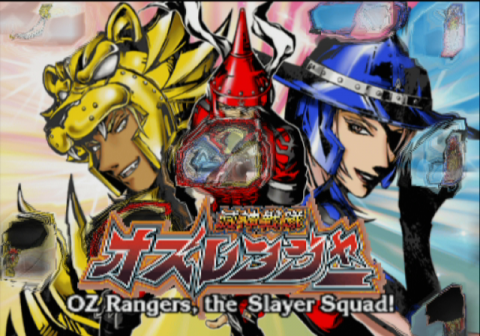 There’s also an absolute ton of content. While you can only play as Fiel in the main Story Mode, there’s also a Bonus Mode which lets you replay old stages as any character. There are branching paths through the main story which change your team member, depending on dialogue selection and how certain boss battles play out. There’s an alternate chapter that takes place in a modern day setting with the characters literally reimagined as part of a sentai team, a whole alternate storyline where you play as Dorothy (who is surprisingly tough for a tiny, prancing girl), a stage where you can play as a group of regular enemies, and numerous alternate costumes of characters from other Konami games.

It’s frustrating that The Sword of Etheria was not brought to North America. It got middling reviews and flopped in both Japan and Europe. Still, it’s extremely well regarded by those who gave it a chance, and while it’s not as flashy as the bigger name titles, stands up as one of the better action titles on the PlayStation 2. 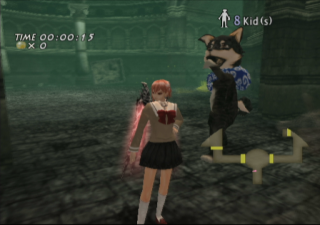 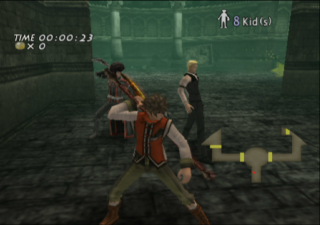 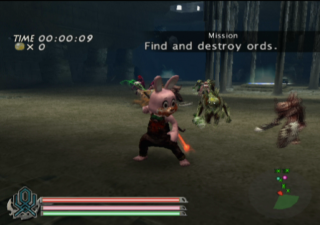 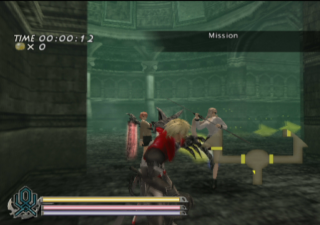 Maximo vs. The Army of Zin
Night mode