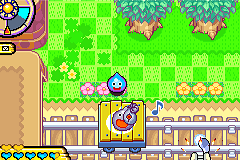 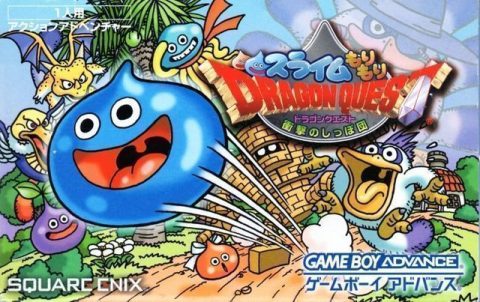 The Dragon Quest series is known for many things, among them basically birthing the Japanese style of role-playing games as we know it, but they remain endearingly charming, partially due to its amusing roster of enemies. Among ferocious dragons and warlocks, there are also weird, little cutesy creatures, to the point where players might even feel a little bad beating them up. The developers eventually realized this, so Dragon Quest IV became the first game where a friendly monster joined your team – the Healslime Healie, in the first chapter – while Dragon Quest V based almost the entire game around catching and raising monsters. Square-Enix went a step further with the Slime Mori Mori series, a trilogy of overhead action games for portable Nintendo platforms, starring one of the joyous, wide-eyed slimes, the monster that had effectively become the mascot for the series, and casting some of the other monsters in supporting roles. (“Morimori” means “enthusiastic”, owing to the near perpetually gleeful look on the heroic slime’s face.) The first and third were Japan-only, while the second was released in English under the name Dragon Quest Heroes: Rocket Slime. The artwork is by Osamu Kaneko, a longtime illustrator who worked on the Dragon Quest series, and who had worked on a number of manga featuring slimes as the main character, including Slime Boukenki, going back as far as 1993. There are no human characters in this side-series, the rationale being that humans would be potentially seen as enemies, since most of them they DO go around the main games killing all of the monsters, and wanted to keep free of that particular drama.

The first development prototype of the Slime Mori Mori series had the slime running around fighting enemies with a sword and shield. However, it tested poorly, as there were two major problems: it played too much like like Zelda, and it didn’t make sense to have a slime, a creature with no arms, holding weapons. The sword and shield were quickly removed, which fixed both problems. Instead of slashing at enemies you would now stretch like a slime, giving a unique feel that makes sense with the character. 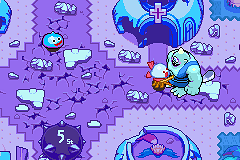 The initial game in the series, Slime Mori Mori Dragon Quest: Shougeki no Shippodan (“Shock of the Tails Brigade”) released in 2003 for the Game Boy Advance. Taking cues from the series it is spun off from, the game starts out in a peaceful town populated by slimes. At the outset, the hero, who you get to name though his default is “Slarin”, is playing around with his friends. They’ve discovered a magical wand, which turns the protagonist into a platypunk (called a momonja in Japanese). His mom catches him and sends his pals away, punishing him by forcing him to spend the night in his transformed state. However, that night, the town is invaded by the Shippodan (“Tails Brigade” in English and later known officially as the Plob – that is, “Platypunk Mob”), and not only are most of the buildings destroyed but all of its inhabitants are kidnapped…except for the hero, since he was still in platypunk form. It’s up to him to rescue everyone else, rebuild the town, and save the day!

Beyond the hero, there are three other characters that help them out. Dorao (Swotsy) is a winged drakeslime with goggles, Miihon (Hooly) is a healslime with a red scarf, and Slami (Bo) is the hero’s doting little sister. There’s also Sidmoja (Ducktor Sid), a friendly platypunk mechanic based on Cid from the Final Fantasy series (and technically being the first cross reference between the series after Square and Enix merged). Though much of the game, you’ll be stalking to underling platypunks through the levels as they bumble around and effectively explain new mechanics to the player. The Shippodan is quite an amusing organization too, seeing how each member wears a number of artificial tails, which is determined by their rank. This, of course, includes monsters which normally wouldn’t have any tails at all. The leader of the group is the mobster-esque Don Monjarl (Don Clawleone), who has an astonishing seven tails.

The game is broken up into eight levels as you travel to and from town. The game only takes a few hours to finish, but has a fair amount of post-game content and side-missions, plus it’s straightforward enough that it’s not too difficult to play if you don’t know Japanese. Each level has a given number of slimes trapped in chests to save and enemies to fight. The day slowly advances from morning to night in these levels, and if it reaches night you get a game over (since this is Dragon Quest, you keep your progress but lose half your gold). This timer isn’t a problem most of the time, but for larger levels it is annoying and often means running back through areas. 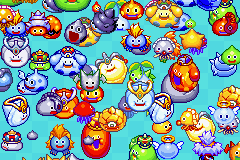 The main attack is the game is the Elasto Blast. You hold the A button, and then stretch out in a direction before releasing and flinging the hero forward. How far the slime hero goes depends on how much time is spent charging up. Each time you blast forward at maximum power, which does more damage, it feels rewarding and adds a good risk-reward feeling. Anything hit by a blast is sent into the air, allowing for you to catch on the blue slime’s head. Objects on the hero’s head (up to three things can be carried at once) can be thrown to cause more damage. Enemies are fun to fight and often interact with each other in fun and dynamic ways. Moments like a picksy picking up another picksy to throw at you or a bunicorn ramming into another enemy instead of you happen all the time. Your moveset is also flexible enough to be used outside of combat, as you can use the Elasto Blast to cross gaps or bounce quickly through the stages. The Elasto Blast is, amusingly, demonstrated in a simple tutorial minigame where you need to clear the room of pots and beat the record of your friend. However, this is extremely easy to do but the game acts as you accomplished something heroic, which is indicative of its silliness. 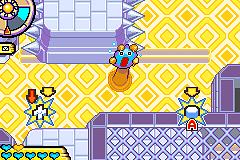 There are some control quirks though. Since you need a small bit of room to stretch out, you can’t just run up next to enemies to attack, you need to back off and fight strategically. Trying to line up objects so they land on him can be somewhat awkward at first, since you can only fling yourself in eight directions. Plus, you can jump, but this is also done by holding the A button, you just need to press it quickly rather than holding it down. You can also float in air, which has a cute animation. Over time, you can become used to these, though.

On the beach you’ll gain the ability to dive under the sand and in the fire-filled mountain you get a knight that replaces your throw with a sword swing. These mechanics are interesting but the game never develops or combines them. In the castle level there’s mechanics like wind and spinning platforms that show up for a few minutes for a puzzle or two before being abandoned for the rest of the game. Transportation like railcars and boats are scattered around every level to bring slimes, items, and enemies back to town. These transports feel a little too infrequent, leading to a lot of wasted time if you want to send a lot of items back home.

After exiting a level, you’ll return to town. As slimes return home, the town becomes filled with life, areas blocked by rubble get opened up and building get repaired. It’s all quite charming, as each slime sends you an individualized thank note once you ship them back to the town. There are minigames like races and combat arenas to play with along with other sidequests. The biggest of these is given by a friendly platypunk who gives you requests for items and money. The town is also nice to just be in. There’s a lot of minor details put into every house and there’s a large variety in the slimes you’ll see.

The visuals are entirely 2D and full of charm. Just flinging your little guy around and smashing into bad guys is a minor joy to watch. Some of the music consists of Koichi Sugiyama’s Dragon Quest score converted to GBA sound, but there’s plenty of original tunes that sound remarkably catchy, particularly the theme song of the Tails Brigade.

Slime Mori Mori is a fine game, though the expanded elements of its sequel definitely overshadow it.