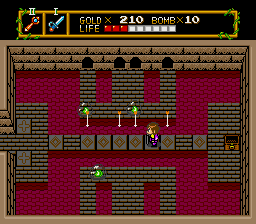 The original Legend of Zelda is one of the most influential games of all time, and its mark on the medium can be found just about everywhere. But like all popular games, its initial success spawned several imitators that did little more than repeat its formula. Most of these were Japan-only exclusives released for the Famicom Disk System, so the few that got even a slightly wider release are the ones people tend to remember (even if they’re not as blatant). Neutopia is one of the latter, being a decently put together Zelda clone by Hudson Soft that offers an easier, if blander experience for fans of that game.

The peaceful land of Neutopia is under attack by the demonic emperor Dirth (known as Raphael in the Japanese version), who has kidnapped the ruling princess Aurora (Laran in Japan) and stolen the eight magical medallions protecting the people. A young man named Jazeta (Fray in Japan) sets out to explore Neutopia, recover the medallions hidden in the labyrinths scattered throughout the land, and save Aurora from Dirth’s clutches. 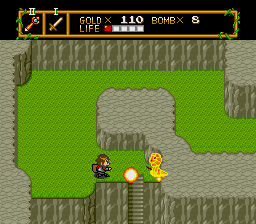 The story doesn’t play much of a role in the game beyond presenting a very basic context for events, but it’s worth mentioning that the dialogue has been given a surprisingly good translation. While most Japanese-to-English localizations of the day suffered from grammatical errors and incoherent dialogue, the NPCs you encounter have very well written dialogue that gives you helpful information, sprinkled with a bit of character that helps it read more naturally.

Neutopia plays much like the first Legend of Zelda, presenting an overhead action-adventure where you wander the overworld in search of dungeons to complete and progress through the game, and this applies to the controls. You can only move in the four cardinal directions, which suits the grid-like layout of the maps well enough but can make moving quickly to avoid attacks or enemies a bit too stiff.

Your sword is permanently assigned to the I button, while you can equip any item to the II button through the pause menu. Items can be found in treasure chests, bought in shops with gold you find on your journey, given to you by NPCs, and picked up from defeated enemies. The vast majority of items are identical to those found in Zelda, usually with a different look or name, but a couple of them are original. These include the Magic Ring, which transforms enemies into much weaker ones, and the Wings of Return, which bring you back to where you last saved. 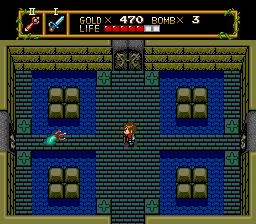 Some items can only be used once before you have to find them again, but are very helpful in a pinch. Others are permanent and can be used whenever needed, like bombs to blow up certain walls and a jar of Moonbeam Moss to light up dark rooms. However, the number of items available is fairly small; for example, the only other weapon you can use is the Fire Wand, which is slightly weaker but has a much greater range and can even be fired diagonally. This means that you have fewer ways of tackling situations, and this can often lead to using the same tools over and over again.

The overworld is quite different from the original Zelda in terms of structure. Instead of having an enormous overworld full of several dungeons, you have four much smaller overworlds (known as Spheres of the Land, Underground, Sea, and Sky) with two dungeons each. You have to complete both dungeons in a sphere before you can progress to the next one, though you can complete them in either order provided you find the item or solve the puzzle required to enter each one.

You’re also given a compass in the pause menu that will guide you to the next dungeon (though you’re not given directions to find whatever it is you need to enter the dungeon – you’re on your own there), and you can find plenty of helpful NPCs to give you hints when exploring the overworlds and within dungeons. Secret areas are plentiful, and are easily noticed as statues or niches in walls to be bombed, singular trees in clearings to be burnt, or a rock to be pushed once all the enemies are beaten. Within them, you’ll find items, upgrades to your health and the number of bombs you can hold, and more. These changes all serve to make Neutopia a more welcoming, less intimidating game than Zelda, which usually just dumped you into the massive overworld to fend for yourself. 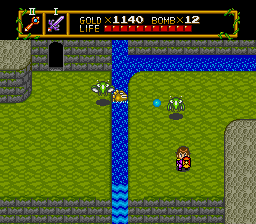 Dotted around the overworlds are save points for you to save your progress. Normally, you’re given a password, but if you’re playing on any of the TurboGrafx-16 variants with the CD drive, you can also save your progress to one of four slots. This is a really nice option that allows multiple players to play the game on the same system without overwriting each other’s saves. You’ll return to these points if you die, but they’re usually placed next to dungeons so you can quickly get back to them.

Within each dungeon, you have to find the dungeon key, which will allow you to open up a special door and fight the boss guarding the medallion. You can also find the crystal ball, which gives you a map of most of the rooms in the dungeon that can be viewed from the pause menu. While you do have a map logging what rooms you’ve gone into before finding the crystal ball, it gets erased should you leave the dungeon or die.

However, some rooms are still hidden from the crystal ball’s gaze, and can only be found by bombing certain walls. Unlike the overworlds, there’s nothing marking them, so you’ll have to bomb walls randomly and hope for the best. Thankfully, most of these hidden rooms simply lead to extra items you can just as easily find or buy up above, so this isn’t as problematic as you might think.

The structure of the dungeons is quite different from the first Zelda in one particular way: there aren’t any keys, and therefore locked doors to open them with. This makes the dungeons considerably more open, as you’re allowed to explore nearly every room from the start. On the upside, this allows for a greater degree of initial exploration and the chance to try alternate routes when replaying the game. However, it also means that you can easily get lost with so many rooms at your disposal, and the lack of encouragement in considering dungeons as a complete structure means you’ll just see them as a series of rooms, which makes them feel quite repetitive in the moment. 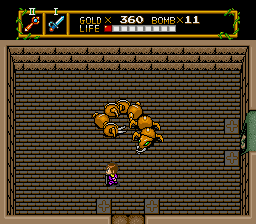 To prevent you from breezing through dungeons, you’ll often be locked into a room as soon as you enter it and forced to solve a puzzle of some kind before you can leave. Unfortunately, these ‘puzzles’ are the game’s biggest weakness, since they consist of either killing all the enemies in a room or pushing a random block to open the doors (which you can only do after killing all the enemies in a room).

While Zelda also suffered from samey puzzles, it at least had new items that you could find exclusively within dungeons to re-contextualize the space and give you new puzzles to solve with whatever you found. That’s not the case here, considering your small arsenal of items and weapons are all picked up from the overworld. The only unique items you’ll find down below are upgrades to your armor, shield, and sword. Because of this, the complexity of puzzles and dungeon layouts remains largely the same throughout, and combined with repeating color palettes and the same music being used in every dungeon, this makes them a slog before too long.

It’s a shame that the puzzles are so repetitive, since you spend the majority of the game doing them. Sometimes, you’ll have to help an NPC in the overworld before they give you the item needed to enter a dungeon, but that’s about it. Despite coming out nearly four years after its inspiration, Neutopia doesn‘t offer anything unique, and even takes away a couple of things. This isn’t to say that it’s a bad game, mind you.

The satisfaction that comes from navigating maze-like dungeons is still there, and though uninspired, it’s a competently designed game and everything works as it should. Collision detection is slightly strange at times, with enemies sometimes hitting you when it doesn’t look they are and you missing enemies that you’re sure you hit, but otherwise it’s technically solid. 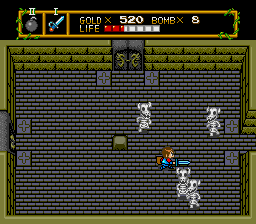 This is backed up by some decent presentation. The graphics are quite good, with a fast framerate that runs smoothly and bold character sprites that are easily distinguishable from the background. The only issue with the visuals is the art direction: colors are slightly desaturated and the visual artstyle is a generic medieval fantasy setting with nothing particularly distinct about it.

The music by Tomotsune Maeno (an in-house composer at Hudson Soft whose most well-known work is for the first Tengai Makyō/Far East of Eden) is similarly enjoyable, with well composed songs that give a memorable mood to each setting. Sadly, the loops tend to be very short, which can make exploring the larger dungeons and overworlds more grating on the ears.

If you enjoy the gameplay of the original Zelda, but don’t mind an easier, repetitious alternative that still provides on exploring dungeons and solving simple puzzles, Neutopia is worth checking out. However, if you’re expecting a more meaningful development on the formula or want more varied puzzles, you’re better off playing one of the later 2D Zeldas.