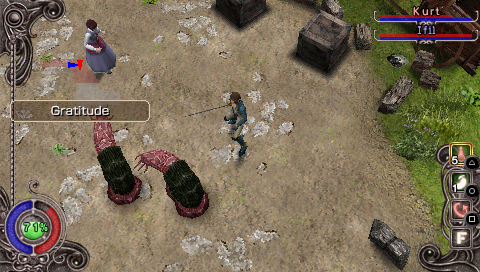 At first glance, the PSP Dungeon Explorer game – subtitled Meiyaku no Tobira or “Door of the Covenant” in Japan – seems a lot more in-depth than its DS brother. The graphics are fully 3D this time around, mostly sticking to an overhead viewpoint. There are six character classes at the beginning – Fighter, Hunter, Monk, Thief, Shaman, and Bishop, with six more, including Samurai, being unlocked later on. There are also three different races – Izark (humans), Ist (elves) and Olff (orcs), each of which have different HP and AP (for special moves) growths. There are also eight statistics instead of the four found in the DS game. Although you’re set in your gender and race, you can change your class as your progress through the game. You can also choose their gender and customize their appearance. Many of the quests also supply you with an AI controlled partner or two, if you’re playing in single player. The story is a bit more involved, with some cutscenes explaining the war between various kingdoms, but it’s all horribly generic. 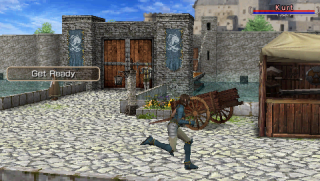 This all seems well and good on the surface, but it quickly changes once you get into the game. Even though the DS game had tenuous ties to the original TG-16 game, it still kept its fast-paced arcade style action. The PSP game is slower, and has much more in common with hack-and-slashers like Champions of Norrath. More annoyingly, your hits are heavily based on your agility statistic rather than your actions, meaning you can swing your weapon at an enemy, but there’s a change that it’ll “miss” even if it looks to connect. In addition to your standard weapon, you also have special “job” attacks, with separate experience levels. As you use these in combat, they’ll level up your Job class, unlocking new abilities. You can execute melee attacks simply by hitting Square, while using ranged job skills is accomplished by holding down the R button and targeting an enemy.

In single player mode, you can’t simply venture forth into the dungeons – instead, you need to take up quests at the adventurer’s guild. Most of these quests revolve around replaying the same area several times under different conditions, killing and rekilling the same monsters over and over. It’s a massively tedious experience, especially everything moves so slowly, and both enemies and generators tend to have tons of hit points, especially in the early stages of the game. 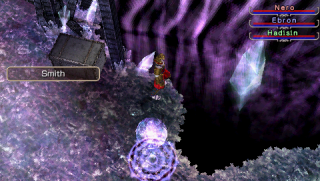 Unlike the DS game, which greatly limited the multiplayer function to two players a single dungeon, here you can join up to three people simultaneously via wireless ad hoc networking. The multiplayer quests are entirely different from the single player quests, and usually just involve straight dungeon crawling. Unfortunately, you still need to play the single player mode to unlock new stages. You won’t gain experience in multiplayer mode either, but you can keep the weapons that you find.

Even compared to other similar types of games, the PSP Dungeon Explorer just doesn’t have much going for it. The visuals are average, the music is mostly shared with the DS game and is just as awful, the action is far from exciting, and the quests are repetitive. If you want a portable multiplayer hack and slasher, you’re much better off sticking to Capcom’s Monster Hunter series. At least there are a few references to the older games – one of the NPCs is named Oddesia, the name of the kingdom from the original TG-16 game, and you’ll find items called “Crystal Beans.”

Cladun: This is an RPG!
Night mode