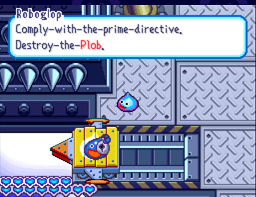 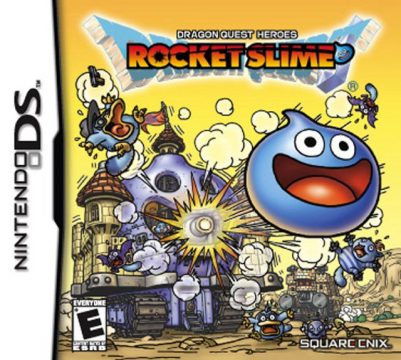 The second game in the Slime Mori Mori series, Rocket Slime takes the original game and adds in a second layer in the middle of it. Once again, you play as a slime trying to rescue 100 of his kidnapped pals and restore your town… but this time you have a gigantic tank. The game mixes the Zelda-inspired gameplay of the original with large scale tank battles together to create one massively goofy and likeable adventure. The Japanese subtitle is Daisensha to Shippodan (“The Tails Brigade and the Giant Tanks”), whose initials also spells “DS”, a rather common joke in many titles for the platform.

The introduction is almost identical to the original, with the hero slime (given the default name Rocket in the English version) playing around with his pals. Rather than a magic wand, this time they’ve dug up an artifact called the Warrior Flute. When the hero’s dad comes in to barge in on the fun, Rocket tries to hide the flute by swallowing it…except it’s much larger than he is, deforming him into an elongated shape. However, once again, the Tails Brigade attacks, and since the bad guys mistake him for a worm, they leave him alone, while kidnapping everyone else. After resuming his regular bouncy self, Rocket returns to action!

Again, you explore seven different levels in much the same way as the original. Visually, it’s basically identical to its predecessor, though a map is helpfully displayed on the top screen during exploration. Combat feels like a step back from the original, though. Enemies are less aggressive and they rarely do anything interesting to the world around them. New mechanics like bungee cords you bounce between and a controllable robot, are fun, but they’re introduced and thrown out even faster than the original. To make up for this, there’s a much greater focus on collection. It’s much easier to grab things for Rocket to carry and you rarely have to go far to find a way to send something back to town. There’s also an Alchemy Pot, directly imported from Dragon Quest VIII (there’s even a picture of King Trode and his daughter-horse when you find it), which will pump out new items when you put stuff into it. 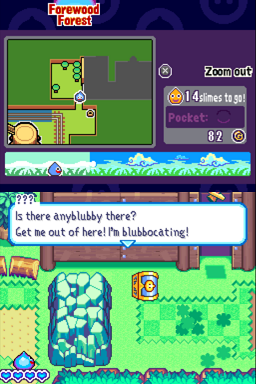 At any rate, that flute wasn’t just some trinket – blowing it will summon the majestic Schleiman tank to duel with other monsters. In each level, there multiple areas where you have to call your tank to fight another foe. In these sections, your tank is positioned on the left side of the battlefield and your opponent’s on right. Despite having treads, both are actually completely stationary. You still control Rocket in these segments, where you pick up stuff and load the ship’s cannons with ammunition to fire at the other side. You also have two friends, chosen among some of the rescued slimes, that work on auto-pilot, that can either continue to fire when you’re not around, or have their AI adjusted for other tactics. Each tank has a low and high cannon that fire in their own arc, and each projectile takes a while to reach the other tank. If a shot in the air hits an opposing shot, both fall to the ground, which means your offense is also how you defend against oncoming attacks.

This all involves quite a bit of of strategy. Before fighting, you can load up your tank with fast projectiles to overwhelm the other tank or you try to use more defensive attacks that can take multiple hits before being knocked out of the air. At any time you can try to go over to the other tank (either by jumping in one of the cannons or breaking down their front door) to disrupt the other crew from loading their cannons or to steal enemy ammo to use against them. Once you’ve reduced your enemy’s tank’s HP to zero, you can burst into their engine room and destroy it – alternatively, the same can happen to you, so you’d better defend it! 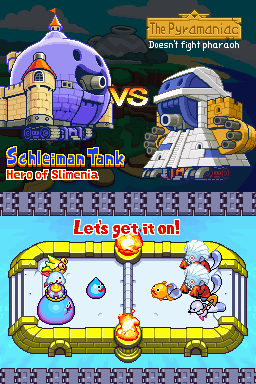 You can’t do everything yourself, so you’d better work with your AI pals, and every second matters, which turns the battles into fun and chaotic messes as you try to pull off your plan and react to the enemy’s plan at the same time. This mode also makes good use of the DS’ two screens, with the top screen showing a live map of everything go on including where everyone is at and where projectiles are in the air. You can also battle against other people in these battles over WiFi.

As the game progresses, it becomes very clear that the tank combat is the star of Rocket Slime. Later levels are frequently broken up by tank battles, killing the momentum of exploration. Plus, the post-game is almost entirely focused on improving your tank for harder battles. There’s no real benefit to go out into the world once you save all the slimes except to find items to use and craft ammo for your tank. This might be a letdown if you liked the original’s gameplay, but the tank battles are fun enough to make up for it. 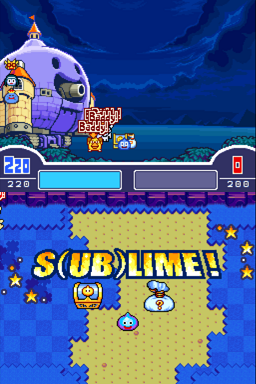 Rocket is also the only game in the Slime Mori Mori series to get an English translation. Localization by Plus Alpha (Dragon Quest IV/V/VII, Phoenix Wright: Trials and Tribulations), the game keeps the modern Dragon Quest tradition of being full of clever and ridiculous puns. Characters have groan-inducing names like the healslime cook Curedon Bleu, the museum-running Crystal Chronicler, or the church leader Mother Glooperior. Each time you face off against a tank you’ll see a name like Fort Knight (who’s listed as “Not Too Weak”) or Chrono Twigger. Considering how grandiose the Dragon Quest games often are, it’s nice to settle down with a smaller scale which has an even greater focus on humor. The end result is an adorably goofy little game.

Final Fantasy Tactics A2: Grimoire of the Rift