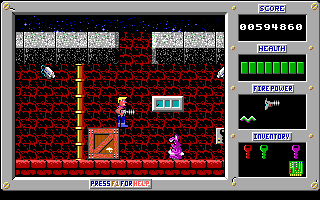 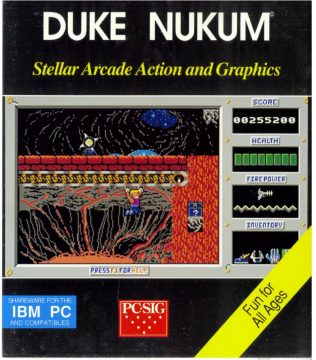 It can never truly be stated just how much the PC gaming scene owed to Apogee. It’s been stated many times, even on this very site, how barren the action game market otherwise was for PC users of the early 90s. Whatever your thoughts on their games themselves, they should be at least be lauded for the fact that they could exist on hardware that seemed to have no business running console-style action games. It’s fair, however, to note that this didn’t happen on their first try. Apogee’s Dark Ages served as a proof of concept. It was the original Duke Nukem (alternatively spelled “Duke Nukum“), however, that would begin to set the new standard for shareware gaming – until Doom hit the scene, at least.

The evil Dr. Proton plans to use his army of Techbots to conquer the Earth. The CIA sends one-man army Duke Nukem into the ruined city Proton is hiding out in to stop him. In typical Apogee fashion, the plot, thin as it is, is spread across three ‘episodes’. At the end of the first episode, Duke chases the scientist to his secret base on the moon, while for Episode 3, Duke has to pursue Proton into Earth’s future. A screen worth of text and a couple of lines of dialogue per episode is all you’re generally given to set up the plot. For an action game, however, it works well enough. 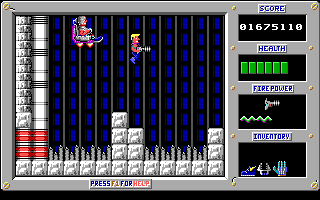 Those used to the modern incarnation of Duke might end up rather shocked, however. In his initial appearance, Duke’s a pretty straight-laced hero who never swears, smokes, or so much as meets any women in the entire game. His rare lines of dialogue are generally pretty direct statements about his objective – the one exception being his implication that he’ll go home to watch Oprah once he’s defeated Proton. His pink vest is rather eye catching, too, and certainly not a design decision the EGA palette could be entirely blamed for.

Even the game’s title screen might come as a surprise, clearly saying the protagonist’s name is “Duke Nukum” – this was due to concerns over how Captain Planet, by sheer coincidence, also had a villain named “Duke Nukem”. Apogee feared they could receive litigation from the show’s lawyers over copyright infringement, and changed a letter of Duke’s name in revision 2.0 of the game to cover themselves. Their fears eventually proved to be unfounded, as the name hadn’t been copyrighted; Apogee promptly registered the original “Nukem” spelling for themselves, and proceeded to use it for the remainder of the series. The first game never saw an update to change the spelling back in turn, however, and remains “Nukum” in-game in subsequent re-releases.

Unlike later games in the series, which were generally shooters of the first or third person variety, the original Duke is a side-scrolling platformer that takes more inspiration from games like Mega Man, of all things. In each level, Duke’s goal is to simply find the door that’ll take him to the next stage. The exit, however, will never lay directly to the right. Instead, each level is a large area that scrolls in all directions, which means you’ll need to spend time exploring every passageway and platform to find the path to the exit. Oftentimes, you’ll also need to interact with certain items to clear the way to the end of the level – you’ll need to grab colored keys to open locks, for instance, or perhaps destroy a power generator to take out an electric barrier. 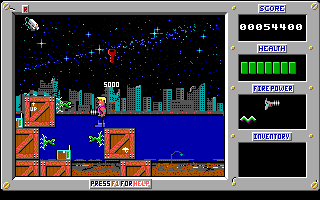 Scattered all over every level is Proton’s Techbot army, which Duke fends off with his laser rifle. Most enemies take about one to three hits to kill, and Duke has an unlimited supply of ammo. The real difficulty is more in taking out enemies quickly before they get a shot off or bump into you, which often ends up being rather difficult. Duke can take up to a rather forgiving nine hits, and health pickups are generally fairly common. When the game gets difficult, it’s usually because the game put a bunch of enemies in a cramped corridor, or some occasions, starts directly dropping them on your head. There are also plenty of hazards to contend with, like bouncing mines, flamethrowers, and falling “ACME” signage, meaning you’re never entirely safe even when you clear a map of robots.

You’ll want to explore every level as thoroughly as you can, not just to take out enemies so they won’t bother you later, but also to grab whatever necessary items you’ll need for later. Besides the keys, there’s a handful of special powerups to collect that’ll remain with Duke across the handful of episodes. Shoes allow you to jump higher, the robohand lets you active bridge-creating switches, while the grappling hook lets you climb across certain ceilings. More commonly, you’ll find tons of colored question-mark crates scattered across every level, each color of which generally contains different stuff. Blue crates contain point items, red crates typically yield health items, and white crates most often contain lit dynamite – but they also tend to contain key items, meaning you’ll have to try and risk it. 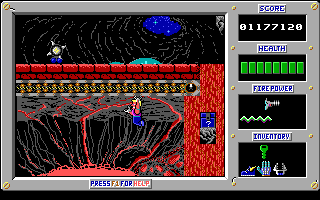 Despite its inspirations, it’s actually a pretty forgiving game, and each episode can generally be cleared in a little over an hour. In a surprisingly modern touch, you have an unlimited amount of lives, and death only means restarting your current level. You can also save your game between levels, a rarity for the sorts of games this one follows after. Unfortunately, the game’s generosity only goes so far, as the amount of health you have when you leave a level is what you’ll have when you enter the next one, even if you’re loading a save. Enter a level when you’re near death, and you might be in real trouble, which means that you’ll want to save the health pickups you’ll find for when you need them.

Skilled players can challenge themselves to acquire various Secret Bonuses in each stage. There are seven total, each one requiring they meet a specific objective, such as not taking any damage, shooting all the cameras or “ACME” signs in a stage, grabbing the four letters that appear in every stage in the correct order to spell “DUKE”, and so on. The only reward for doing so is a higher score, however, and scores are especially meaningless here, as you’re prompted to enter your name in the high score table even if you’re saving and quitting a game in progress, making it very easy to fill the entire board up with your own name from a single runthrough if you were so inclined. 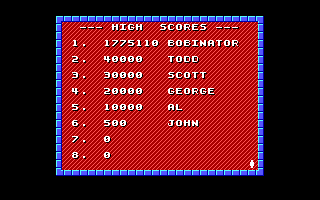 The first episode is actually pretty entertaining, never feeling like it gets entirely unfair, while adding enough to each of the levels to motivate you to finish. Unfortunately, after that point, you’ve seen about everything there is to offer. There are no new enemies or hazards to contend with, nor is there really anything to see aside from some new background art. Unfortunately, it’s rather typical of shareware games of this era to frontload their best stuff to make a great first impression, and this fact remains quite true here as well. There’s only so much wandering around maze-like levels one can take before it starts to drag a little, and when there’s nothing new to see to make it worth it, that’s when the motivation to continue begins to drop rapidly. 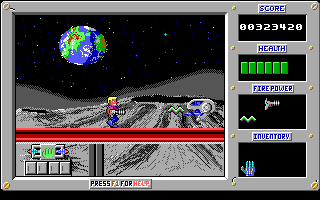 The graphics, considering the hardware the game is ideally meant to be played on, manage to hold up surprisingly well. The sprites are large and detailed, and the scrolling, while somewhat choppy compared to contemporary games like Commander Keen, never gets in the way of the game. What is a concern, however, is the relatively small playfield, taken up by an enormous HUD and screen border. This often prevents you from being able to see ahead of you very well, which, combined with the large sprites, means you can end up taking more than a few unfair hits. The sound effects come entirely from the PC speaker, and are so frequent and noisy that anybody not used to that particular sound will probably end up turning them off. No music is present whatsoever. 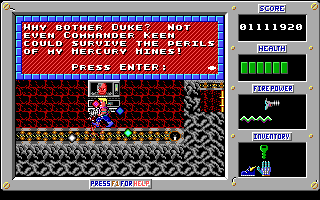 The original Duke certainly has issues, especially when it comes to staying power. While it can’t quite match up to the console games that brought about its creation, it still has its own unique charm, mixed with some annoying faults. When you consider the sort of hardware it was made for, as well as its age, however, it’s a very well made game, and one that does manage to be pretty fun, for a while. Given the way the series would eventually end up, at the very least, it makes for an interesting curiosity.