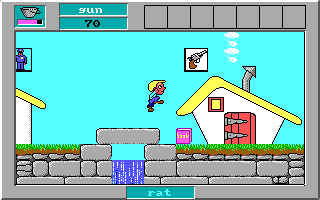 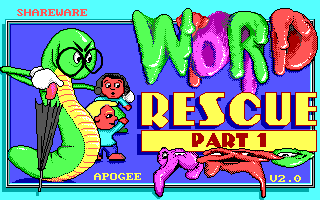 Edutainment games have never been the most successful of genres. After all, people play games to avoid learning, not to get more of it. Still, there are a few games that mix both gameplay and learning pretty well. Pretty much anybody with a grade school education in the 80s will remember Oregon Trail. While Word Rescue doesn’t have quite the widespread memories as either of those games, it’s still a pretty fun game, edutainment or not.

The monsters known as the Gruzzles have stolen the words out of the world’s books because they can’t read, and they don’t want anybody else to, either. As a child of either male or female gender, you must help Benny Bookworm find the missing words and put them back into his magic book. Of course, these are words such as ‘dog’ and ‘cat’, since something like say, ‘establishmentarianism’ would be hard to fit into a little EGA icon.

The basic game structure is similar to other Apogee platformers of the time, such as Duke Nukem. Since it’s a kid’s game, however, there’s a lot less firepower involved, and the game focuses more on exploring. Each level has a bunch of Mario-esque blocks scattered around, and touching one of these will give you a certain word, while revealing pictures hidden under the rest of the block. After you reveal a word, you touch its matching icon, and they’ll disappear. Once you match every word/picture pair on a level, Benny will give you the key to the level exit.

The Gruzzles will occasionally try to stop you, however, either showing up somewhere in the level or if you make a wrong match. If you hit the space bar while standing near one, Benny will appear and dump a bucket of slime over it. You only have so much slime, though, and if you run out, you’ll have to avoid the enemies until you collect some more. You can get more slime either through finding more buckets or by spelling the level’s bonus word out with letters you find in the levels.

The game is actually a little unforgiving for its target demographic. You can only take one hit, and if a Gruzzle touches you or if you fall into a pit, you’ll be sent back to the start of the level. Sure, the levels are short and don’t have any real hazards or gimmicks besides the pits, but that’s a little harsh for a game made for kindergartners. Of course, while there are multiple difficulty levels, the hardest of which is apparently meant for children ten and up, the fact is that if your ten year old is still learning words like ‘dog’, they may need a lot more than an educational platformer.

The game’s graphics are bright and colorful, as they should be, although the backgrounds are a little lacking in detail. There’s a good amount of variety in the level themes, ranging from castles, caves, and haunted houses. Some of the icons that go with the words might be a little ambiguous, but you can see which icons go with which words by hitting the W key. While the sounds are only PC speaker bleeps, there’s actually a pleasant, almost jazzy Adlib soundtrack, although there’s only a few tracks, which eventually starts to get repetitive. 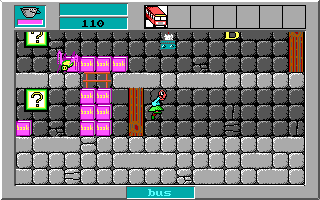 While Word Rescue isn’t really the most educational of games, young children who somehow happen to be into DOS platformers will probably enjoy it. The platforming is good, if uncomplicated, and the actual learning part never gets too much in the way.

While the game can be found and purchased on the 3D Realms site, the developer, Redwood Games, released a separate version called Word Rescue Plus. While the graphics and gameplay are the same as the original version, all the level layouts are entirely new. There’s also a brand new soundtrack composed by Bobby Prince of Doom soundtrack fame, if Adlib tunes are your thing.