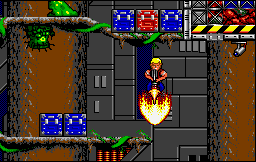 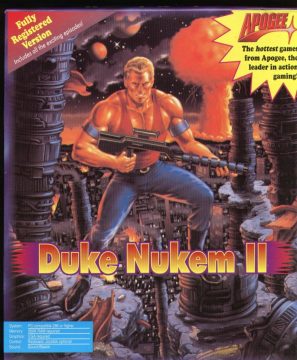 Since the two years that had passed since the release of the original Duke Nukem, the world of shareware gaming had been a busy one. Apogee had gone on to put out an assortment of games, not the least of which was publishing iD’s groundbreaking Wolfenstein 3D. Epic MegaGames became a worthy competitor to their craft, the Sega to Apogee’s Nintendo. Computers, meanwhile, were getting stronger all the time. Duke Nukem II still has its faults, but the two years of gradual improvements in Apogee’s game craftsmanship definitely shows, and make for a game that outdoes its predecessor in a great many ways. 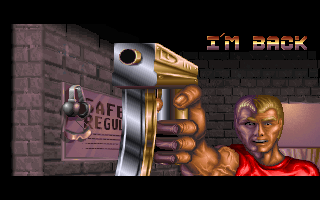 After defeating Dr. Proton, Duke becomes a nationwide hero, with his own set of merchandise and constant TV interviews in his schedule. During an appearance on a talk show, however, he ends up being abducted and imprisoned by an alien race known as the Rigelatins. The aliens plan on using Duke’s brain to launch an attack on Earth. One exploding molar and a poorly guarded weapons locker later, however, and Duke soon escapes his cell, setting off on a four episode journey to take down his alien captors and find a way back to Earth. There’s been a little more effort presented into the simply story this time around, with a fully illustrated cutscene to explain the plot upon bootup.

The general feel of the game still isn’t quite what would eventually be solidified with Duke Nukem 3D, but it’s starting to get there. Duke now sports his usual red tanktop, although he’s still wearing the shades. He’s also a lot more talkative in the intro cutscene and the scenes that play between episodes, although he comes off more snarky than his later, unfailingly macho appearances. “I guess I’ll lean against this oozing, bulbous wall and wait for death” certainly isn’t really something you’d expect to hear from Duke’s modern incarnation, anyway.

The basic gameplay concepts established with the original game all make a return here, nearly untouched. You’ll still explore each level in all directions, hunting down the items you’ll need to clear a path to the exit. The one twist in this formula are levels where you’re tasked with finding and destroying a number of satellite dishes tracking Duke’s position before you’re allowed to leave. There’s also a boss to fight at the end of the eighth and final level of each episode. Technically, while you would encounter Dr. Proton in the original game, he behaved just about like any other enemy. The bosses here aren’t terribly complex, but they all follow some basic patterns you’ll have to study and have a ton of health, making them a lot more noteworthy as foes. 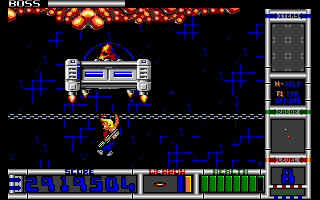 While the main gameplay hasn’t changed all that much, there’s plenty of tweaks and additions to find. Duke can now crouch, shoot upwards, climb ladders, and hang from certain surfaces right from the start. His new rifle also fires as fast as you press the button, which is balanced out by the fact that enemies are somewhat more durable than before. More excitingly, there’s now three types of special ammunition that can be collected and used for a limited number of shots. Lasers do more damage and cut through whatever they hit, rockets inflict massive damage. The flamethrower’s probably the most fun of all of them, since it can be aimed underneath Duke to boost him upwards to areas he couldn’t otherwise reach. 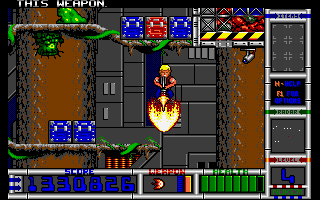 You’ll need all these advantages, because this game tends to be somewhat tougher than its prequel, on the whole. Enemies tend to be much more aggressive and move a lot faster, making it a lot more difficult to get out of the way of their attacks in time. Health pickups aren’t quite as common, meaning remembering where the pickups you find becomes vital in later levels. In fairness, the game now features multiple difficulty levels, which generally determine enemy density and how many powerups you’ll find lying around the stages. There’s no real shame in playing on the easier difficulties, since you won’t miss out on anything aside from frustration. Two small kindnesses are that the game now features mid-level checkpoints, although these record your current health when you touch them. If you can make it to the end of a stage, however, you’ll start the next one with a full boost.

The level designs themselves are generally a little larger, more varied, and have more going on in the original game. One particularly interesting level are a set of ruins currently being wrecked by an earthquake, and as you progress, the buildings fall apart to clear the path ahead of you. Not all of the levels are this interesting, and you’ll still find quite a few nondescript mazes, but these moments are pretty fun when they happen. There’s also a rare handful of levels where you get to pilot a ship, which lets you fly freely and blow through enemies with a rapid-fire laser cannon. Sadly, these moments don’t happen very often at all, but they’re pretty cathartic while they last. 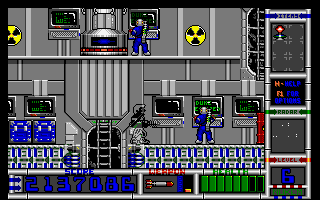 More than anything, however, DN2 is less about trying something radically new, and more about adding onto the original concept. And it does that well, adding in a ton of new enemy types, new hazards, and new level concepts. You’ll encounter robot spiders that you’ll shake to shake off before they drain your health, fans that whisk you high into the air, and cloaking devices that let you take out enemies while remaining unnoticed. The new content helps prevent things from becoming as stale as they did in the original game, which was really one of its biggest flaws. Unfortunately, there’s still eventually a point where you’ll have seen everything the game has to offer, but to the game’s credit, this takes a little while longer than it did in the previous game.

The graphics have a lot more color to them, and the tilesets are a lot more varied, which means more of the levels have unique looks to them. There’s some pretty cool concepts for levels, like a power plant/robot factory and the underside of a rocketship Duke has to clamber around. Unfortunately, just as many levels are nondescript caves and buildings, and these can be somewhat easy to end up getting lost in. The sprites are generally larger, as well, and unfortunately, this can make it easy to end up having enemies and obstacles just outside of your viewing area. The HUD now has a radar that’s supposed to combat this, but it doesn’t really show enough of what you can see on your screen to be all that useful. 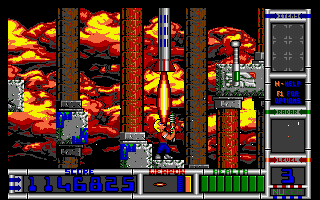 The sound’s had some of the biggest improvement of all, with an assortment of digitized sound effects that grate much less on the ears than the old PC speaker. Somewhat amusingly, a good number of the sounds are ripped directly from other sources – you might pick up sounds from Star Trek and, of all games, Super Castlevania IV. There’s even a full soundtrack courtesy of Doom composer Bobby Prince, almost all of which is made up of rock and metal. There’s actually a lot of decent tracks in there, but sadly, the Adlib hardware the game plays them through holds the actual compositions back.

Whatever you think on DN2 is generally going to be the same as what you thought about the original game, as it’s basically everything that game was but more. The best parts of the game are even better, while not as much has been done to address its faults. On its own merits, however, it’s still probably the pinnacle of Apogee’s 2D output. Few shareware platformers can quite match up to it, flaws and all, and it certainly deserves a place on any top DOS games list.

When the game received a rerelease on Steam, all of Duke’s sprites, both within gameplay and in cutscenes, were edited to include his sunglasses. The part of the HUD that told you which keys to press for help and to access the options screen were also replaced with a static picture of Duke’s face, for whatever reason. Unfortunately however, DN2, along with the rest of the series, can no longer be bought from Steam or GOG. 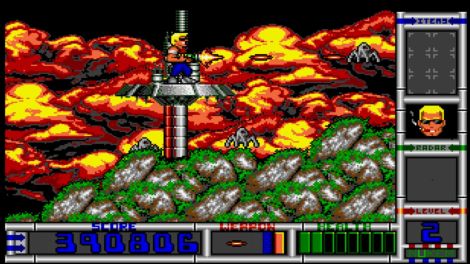