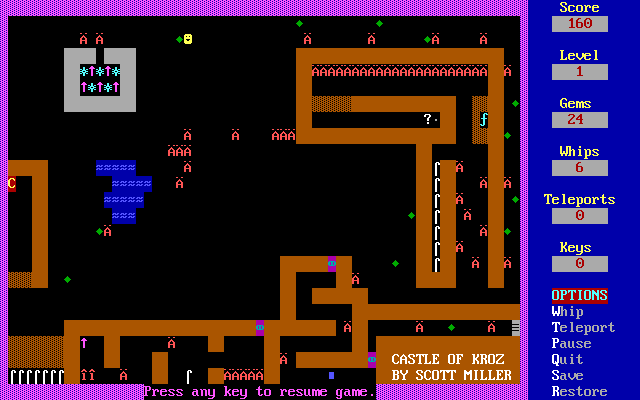 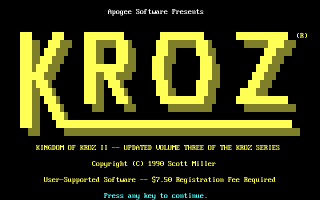 Long before Apogee became the shareware giant it was known as in its later years, it was just a simple one-man operation, run by Scott Miller. He wrote a few games before, but the Kroz series were the first games to use the Apogee name, even if they hadn’t started using their shareware model yet. Scott was inspired by Zork (the inspiration was made fairly clear by the title) and Rouge. He disliked how random Rogue was, so he created his own game, using pre-made level layouts and using a more arcade-like style of gameplay

The first three games in the Kroz series were known as Kingdom of Kroz, Caverns of Kroz and Dungeons to Kroz. In 1990, along with rereleasing the original trilogy, Scott released three more games using an updated engine: Return to Kroz, Temple of Kroz, and Final Crusade of Kroz. After that, the final game in the series, Lost Adventures of Kroz, would be released. Another game, Underground Adventure of Kroz, was planned for 1991, but was never released.

If that seemed like an oddly brief recap of the series, that’s because there’s not really much to say about them. All the Kroz games play more or less identically, other than the newer games and the rereleases of the older titles running a little better. While each game has its own level layouts, the graphics and gameplay remain constant. In every game, you control an ASCII adventurer exploring the land of Kroz in search of treasure and glory.

Each level is a single screen room made up of objects and monsters. The goal of each room is to find the stairs leading to the next one, while collecting objects and killing or avoiding monsters. Some of the objects you’ll have to deal with in each room are traps that spawn monsters or close off walls, among other things, crumbling walls that can be destroyed by you or the monsters, and locked doors that require keys to be opened. There’s also gems, which serve as your hit points, and whips, which kill all enemies one space away from your character. 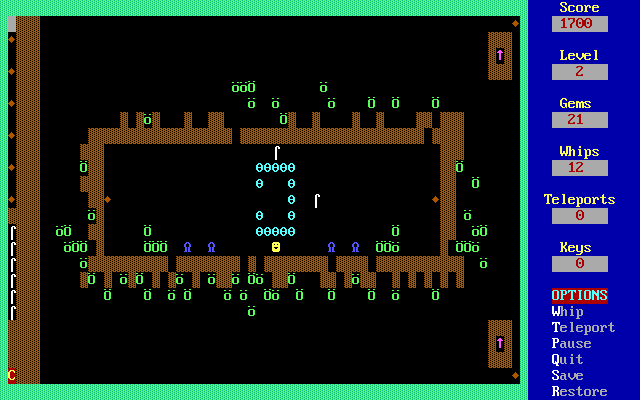 The strategy is trying to figure out which monsters to kill and how many, because you only have so many whips to defend yourself with. You may need to have them walk into crumbling walls, push a boulder over them, or just take the damage and conserve your whips. Since most enemies have more monsters than you could possibly kill, the best option is usually just to run after them, collecting what you need. Be careful, though, because enemies destroy useful items such as gems and spells when they touch them, which can make the level even harder.

The game can be pretty difficult, even on the lower difficulty settings. Everything takes place in real time, and the monsters move pretty fast, so if your reaction times aren’t great, you can end up swarmed and killed in just a few seconds. The fact that the game tends to lag if you don’t enter each key one at a time doesn’t help, either. Don’t hold a key down, because all that will do will make your character jet toward a direction and ram his face into the nearest obstacle for a few seconds. The traps can also screw you out of the game if you’re not careful, including the bottomless pits. It’s worth falling down a bit just once, just to see the animation: Your character falling down a huge shaft for about half a minute, before hitting the bottom with a huge splat. The whole thing takes so long the game has to tell you you’re halfway to the bottom.

The graphics are made of ASCII characters, which means that everything is made of letters and symbols. Your adventurer is represented as a smiley face icon, trees are club signs, and monsters appear as letters with umlauts. The sound is only PC speaker beeps, although apparently they were quite elaborate for the time.

While Kroz might have been impressive back in the day, now it’s just more dated than anything else. If you can get past the simple graphics, the gameplay’s still frustrating, and none of the games are really that different enough to justify playing through more than one. If you play a Kroz game, be sure to lower the cycles in DOSBox, as the game will run far too fast to play otherwise. 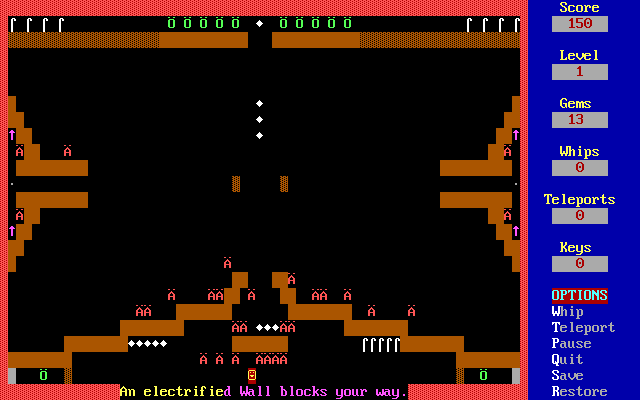 While Apogee never continued renewing the Kroz series after Lost Adventures, one game that plays a little similar that may be worth looking into is Deadly Rooms of Death. The gameplay involves maneuvering around monsters and obstacles, but is turn-based, giving you more time to think about your moves. There’s also a Flash game, Hidden Caves of Kroz, which takes the original game concept, adds in new levels, and adds a few more modern touches.