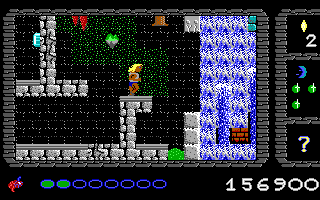 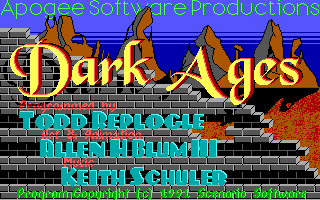 It should be said before anything else: Dark Ages isn’t really a very good game. However, it IS a huge leap in technology for Apogee, in both the visual and sound departments, and for that, it’s worth taking a look at. It’s also the game that solidified the structure for most of Apogee’s platformers, although there would be a lot of improvement and tweaking as time went on.

You play as an unnamed prince, heir to a great kingdom before the evil wizard Garth banishes you and takes over. On each level, there’s a wise man who wants you to find a specific object. If you find it and bring it back to him, he’ll open up the exit and vanish. Apogee seemed to have a very big thing for making you find objects to leave the level, and it would be something that would appear in nearly every single one of their games. There are three episodes: Prince of Destiny, The Undead Kingdom, and Dungeons of Doom. 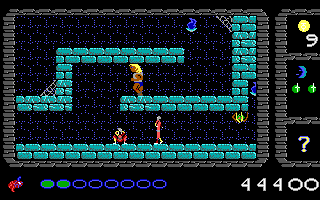 Your character is armed with an infinite supply of fireballs, and you can collect fireball powerups to increase your rate of fire. There’s also a couple of other weapons to collect, like boomerangs, but these barely differ from your standard fireball at all. There’s also giant coins scattered around the levels, and collecting enough of these will restore one hit point. They tend to be so rare however, plus the fact that you need to find ten on the easiest difficulty, makes it hard to actually hold onto whatever health you gain back.

Every level is a simple left to right affair, and the engine isn’t even capable of scrolling vertically. Sometimes you may need to walk in another direction to find a special item, but other than that, every level is just walking forward, jumping over things, and killing the masses of easily destroyed enemies in your way. The enemies usually don’t do much more than walk back and forth, and the only real challenge in the platforming are parts where you have to run across a bunch of collapsing blocks before you’re dumped into a bottomless pit.

If the enemies do land a hit on you, however, you’re in trouble, because health tends to be pretty rare, and you technically only have one life. The game will let you save your position at the start of the level  you were on after you die, but the problem is you’ll be set to whatever amount of health when you started a level. So if you start a level with only one hit left, you’ll have to be extra cautious so that something doesn’t suddenly scroll in and kill you. Also, your character can be killed by a cobweb. 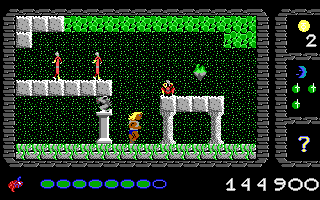 The graphics are a huge leap upward in terms of technology, with an EGA color palette of 16 colors. Unfortunately, none of these eight new colors are actually ever used very well. The sprites are blocky, and your character looks like he’s been ripped straight from a mid-80’s Commodore 64 game. The backgrounds are bland at the best of times, and painful on the eyes at the worst, like the lime-green dungeon walls.

The sound, on the other hand, is more impressive. This is actually the first Apogee game to utilize the Adlib soundcard, meaning that there’s a full soundtrack of music that doesn’t come from the bleepy little PC speaker. Sadly, however, there’s not many actual tracks, and the few there are tend to be a little grating. They don’t even loop, because after the first time they play, you’re just left with a heartbeat sound until you move onto the next level. Still, though, the fact that there’s actually music in this game is impressive, especially since Apogee wouldn’t even use Adlib music in their games again until a year later. The sound is still the standard PC speaker noise, unfortunately.

Dark Ages’ simple formula would be improved upon, and the company would go on to make much more effective use of EGA in games like Duke Nukem. The game was eventually released as freeware on the 3D Realms website.