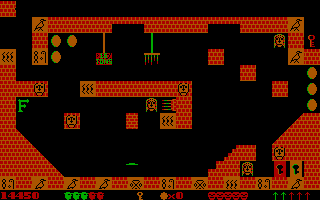 Another game by Micro/FX and George Broussard (who somehow managed to spell his last name wrong on the title screen), this game is a much more ambitious piece of work than his earlier games. No longer pumping out yet another quiz game, this would be a full arcade adventure, complete with actual graphics, as simple as they may be. While it looks primitive, if not downright ugly in comparison to Apogee’s later work, it was this that would give the company the jumpstart to release better things down the line.

You play as Nevada Smith, (groan) a jealous research assistant to a famous archeologist. One day, Nevada steals a map from the professor that leads to an ancient pyramid, supposedly full of treasure. When he arrives, however, it turns out that it’s, as expected, full of monsters and traps.

Pharoah’s Tomb is fairly simple as far as platformers go, much more like a game for the Commodore 64 or the ZX Spectrum than the consoles of the time. It actually feels a little like a spiritual sequel to Montezuma’s Revenge, with a similar setting and gameplay. The goal of each screen is to find and collect the keys scattered across the level, and use them to unlock the doors preventing you from reaching the exit.

Much like most of the old British platformers, Pharaoh’s Tomb feels so similar, there’s a lot of precision jumping involved, which can be painfully difficult at times with how ‘sticky’ the controls tend to be. Nevada won’t always jump when you tell him to, for example, especially if there’s something above him. The game also has some wonky collision detection at times, which the game claims is due to the engine it uses for extra speed on older computers.

Aside from simple hazards like floating platforms and spikes, it also gets more complicated. Some levels have wind that blow you around, and some platforms won’t appear until you collect an object. Some levels even it make it so Nevada is barely visible on screen, leaving him as just a floating hat. The meanest trap of all, however, so frustrating that it makes one wonder if this game was playtested, are the walls at shoot. These look like regular walls, up to the point that you cross their line of sight. They then shoot a projectile that kills on contact. The only way to actually TELL which walls will shoot and which won’t is by looking to see if they have a dot in them or not.

Nevada only gets five lives, losing one any time he comes into contact with something dangerous. It is possible to earn more, either through collect 100 coins for five idols. The problem is that every time you die, your coin and idol count are reset to zero, making it not even worth the bother to collect them. There’s also spears you can collect to kill monsters with, although these are in such short supply that using them up too quickly can make your game impossible.

While the graphics are a sharp upgrade from the text only look of Micro F/X’s earlier trivia games, Pharoah’s Tomb is still a little rough to look at, even back in 1990. The colors only come in different shades of brown and green, and the sound is still scrictly PC speaker.

Overall, Pharoah’s Tomb is ugly and difficult to play, although it’s forgivable for the fact that it’s Apogee’s first real platformer. They’d quickly improve from here, and quite thankfully, too. The game was released on 3D Realms’ website as freeware.