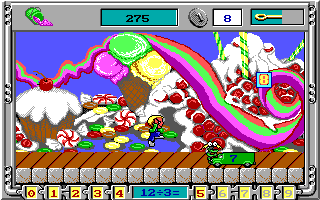 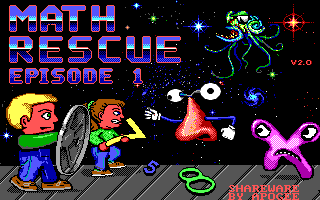 A few months after the release of Word Rescue, the educational platformer developed by Redwood Games, a sequel was completed. While Word Rescue dealt with teaching children basic English, Math Rescue focuses around teaching basic math like addition, multiplication, and division. The Gruzzles have returned and have stolen the world’s numbers, leaving the human race at a total standstill. As either a little boy or girl, you must find and rescue the numbers with the help of Benny Butterfly. (Who was apparently a caterpillar all along in Word Rescue.)

Math Rescue uses the same engine and gameplay style as Word Rescue, so it’s not all that different from its prequel. Instead of matching word/icon pairs to unlock the level exit, you collect numbers scattered across the level. Touching a number gives you a math problem, the kinds of which are determined when you start the game. You can also choose whether how much of the questions you want to be word problems, or turn the problems off entirely. This turns off the game’s main feature and makes it into a very simple platformer, but the option is nice to have anyway. 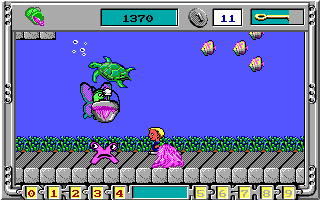 You still dispatch the enemy Gruzzles the same way, by calling in Benny Butterfly and having him dump slime upon them. A nice addition to the game is that one hit no longer sends you back to the beginning of the level, which was a little harsh considering the game’s audience. Now you collect garbage can lids, which act as hit points for when an enemy touches you. There’s also bonus rounds in between levels, where you quickly answer questions under a time limit for extra slime and lids.

The levels are also a little bigger and longer than in Word Rescue, and there’s a few more secret passages, as well as warp signs that send you to another part of the level. Compared to most of the other games Apogee had published at the time, there’s still not many unique or surprising level elements, which is acceptable considering that it’s a game for young children.

The graphics are a bit more detailed than Word Rescue, and the game has a slanted perspective to it, a little like the later Commander Keen games. There’s a lot of new level themes, like volcanoes and candy lands, which are appropriately colorful and cheery. The soundtrack isn’t quite as good as Word Rescue’s, but it’s still full of pleasant, bouncy Adlib music. 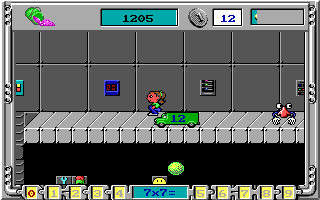 Math Rescue may not be a huge change from its prequel, but it’s still pretty decent for an educational title. While adults will probably blaze through it in no time, it does a fairly good job of what’s it made for. Just like Word Rescue, Redwood Games sold a Plus version of this game as well, with new level layouts and a new soundtrack from Bobby Prince.