With such titles as Tyrian, ZZT, Jill of the Jungle and Jazz Jackrabbit under their belt, Epic Megagames was a major contender in the PC gaming world of the early ’90s. But while many of their titles ended up as classics, perhaps one of their most intriguing titles faded away into obscurity.

Xargon is the successor to Epic’s previous, better-known platformer, Jill of the Jungle. Like Jill, it is divided into three episodes, with the first available as shareware. It also borrows numerous elements directly from Jill, such as collecting giant fruit for a health bonus, animal transformations, giant rolling boulders, an evil laugh as the death sound and, unfortunately, the frustratingly-stiff controls. Of course, you would never question the more whimsical elements from Jill because the game is meant to be silly and fun. Xargon, however, takes on a much more serious tone, and yet you would never think of questioning the giant floating fruit or the fact that you can shoot laser beams and boulders out of your chest. Why? Because in context… it actually makes sense.

The story revolves around Malvineous Havershim, an archaeologist anthropologist in the vein of Indiana Jones (all he’s missing is the hat, the whip and the attitude) who, whilst studying mysterious ruins in Madagascar, gets sucked through a portal to an alternate dimension. From there, the plot is mostly established in the form of journal entries found on the map screen and cryptic ingame conversations with a talking eagle. While these conversations are mostly made up of the eagle telling you to find some mysterious artifact for no particular reason and refusing to give you any useful information, he slowly clues you in on what’s going on. This dimension has been taken over by an evil overlord named Xargon and you are the chosen one who must defeat him before you can return home.

The plot may be a bit derivative, but the style of the game is very unique. The visuals paint an alien world full of exotic overgrowth, ancient ruins and volcanic caves. In a few places, your surroundings are even a bit paradoxical. For example, you can sometimes stand on clouds or see the sky in the background while indoors. The enemies are quite interesting and varied, as well. There are giant bugs, strange creatures that almost look like giant walking hands, trolls that resemble the imps from DOOM, viscous bunny-rabbits, strange alien creatures that sort of look like sideways uprooted tree stumps, and balloon-like robots.

Unfortunately, however, there are certain levels that break the overall feel of the game. In the levels that take place in Xargon’s factories and castles, the vivid fantasy landscapes and enemies are replaced with what feels closer to hard science fiction. Naturally, of course, the boss battles (or the closest thing this game has to them) all take place in such areas, which is a bit of a let-down. They also decided to change the colors of certain things for the third episode, most notably giving Malvineous a change of clothes. But as this effect is achieved through a lazy palette swap, the color of Malvineous’s eyes is changed as well, giving him a rather demonic appearance.

The music and sound effects, on the other hand, are consistently outstanding. An FM-heavy soundtrack full of MIDI harpsichord and organ sounds gives genuine depth to the bizarreness of this strange new world. Each episode plays a slightly different version of the main theme, each one perfectly setting the mood. The sound effects are perhaps the quirkiest part of this game, and can’t really be described. Some of them come out muffled due to the low sampling rate, but this only adds to their character.

Xargon‘s mechanics are very interesting, if somewhat marred by the fact that the controls are painfully stiff at times and the game occasionally throws out jump-at-the-exact-right-time-or-die-in-a-pit-of-boiling-lava-and-lose-all-your-progress sequences in the middle of the level. You start out each level with the ability to shoot laser beams out of your chest, but they move slowly and you can only have one on the screen at a time. Fortunately, among the more common power-ups are “extra bullets” which make your beams fly faster and allow you to have more than one on the screen at a time. There is also a “rapidfire” power-up which automatically allows you to shoot five, the maximum number beams you can have on the screen at a time. The other available weapons are fireballs, which instantly destroy everything in their path, and boulders, which arch and bounce, allowing you to get around corners but also making it very difficult to aim. 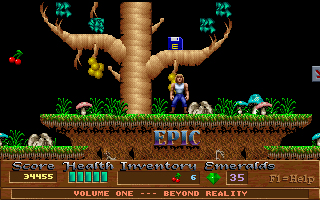 The most unique feature of the game is the ability to buy health and powerups at any given time during a level, with emeralds collected throughout the game. There are also sequences in which you climb into a mini-submarine and navigate underwater, and a couple places where you can play as a giant bumblebee. The underwater sequences were some of the best parts of the game, but the bumblebee sequences were poorly-executed. In the bumblebee sequences, you have to continuously keep hitting the jump button in order to keep yourself in the air, while in the underwater scenes, you only need to hold the up arrow to keep yourself afloat.

On a side note, there are these nondescript devices (presumably some sort of camera) on the walls of indoor levels that seem to open and close at random. When open, they can be destroyed for extra points. 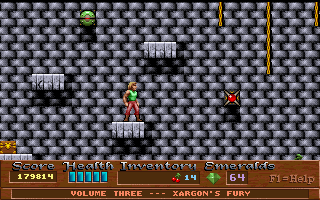 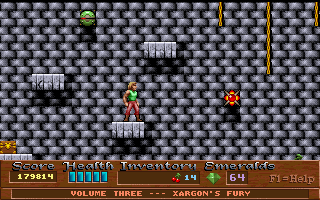 Overall, while it may have its shortcomings, Xargon is a sadly-overlooked piece of gaming history that is well worth your time if you’re a gamer who enjoys quirky Western titles.