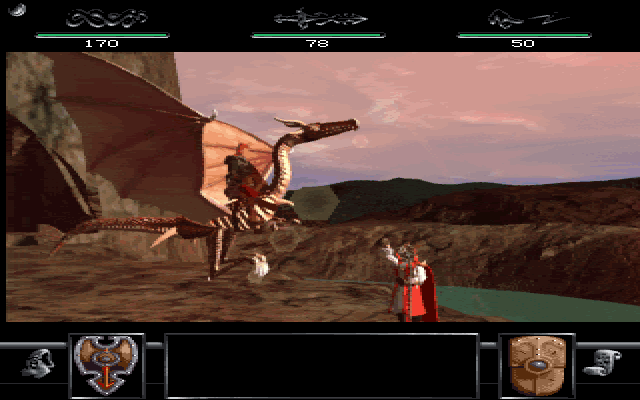 So technically the hero, Werner, got inducted into the Dragon Knights at the end of the first Dragon Lore, but that hasn’t been quite enough. The shifty Duke Carichand has opposed your induction, requiring that you not only enlist in a joust tournament to prove your honor, but also track down Mighty Maraach, the long missing fire dragon, to get him to sponsor your rank.

At first glance, Dragon Lore II seems to be a remarkable improvement over its predecessor. The quality of the graphics has improved immensely and the game now runs in SVGA. The still screens are gone, replaced entirely with full motion transitions (which can conveniently be sped up with the space bar), and even the scenery is animated when you’re standing still. While the visuals no longer take up the whole screen, there’s an actual health meter and inventory bar. The story is better integrated, with multiple dialogue trees and more cutscenes. The RPG elements have been improved, offering a wider variety of weapons, and the game runs in real time, with day and night cycles. And yet despite all of these improvements, Dragon Lore II is a substantially worse game. 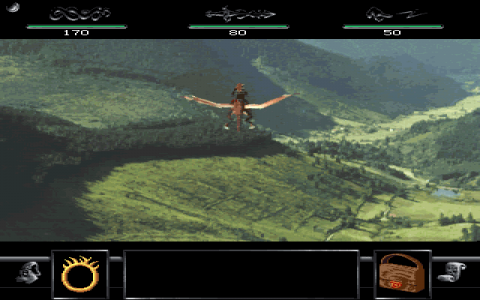 The navigation, for starters, is terribly confusing. Instead of just moving step by step, you turn and weave through various paths. The first terrain you explore is a mazey swamp, and it’s incredibly difficult to maintain your bearings. Indeed, most of the adventure seems to be spent wandering aimlessly in circles. You can no longer move at all once engaged in combat, so the only thing you can do is stand your ground and keep clicking. The fighting was brain dead in the first game, but at least it was easy – here, not only are these scenes drawn out but you’ll always end up taking damage, too. There are numerous ways to instantly get killed, as well as walking dead situations, which were practically banned across all other adventure games when this game was released in 1996. The real-time elements are stupidly implemented, since they just involve waiting around or wandering in circles until day or night comes, and also requires that you manage your ever-depleting strength by eating food and resting at inns. The game comes on three discs and asks you to swap them constantly. There are a couple of very badly implemented jousting segments, which are equally are stupid as the combat. And the story is still incredibly trite. While the first Dragon Lore was daft at the time of its release and is incredibly dated now, at least it’s playable. The same can’t be said of this sequel.