The popularity of RPGs like Wizardry and Dragon Quest had a huge effect on the Japanese video game marketplace. This was visibly seen in many Famicom games at the time, like Zelda II and Castlevania II, which adopted RPG elements not found in their previous games. While most would agree that RPG aspects are better left to console games, which are generally longer and therefore more suitable to home play, there were still a number of arcade games that tried to integrate some of these elements, like featuring character classes or allowing you to obtain money to buy more equipment. The earliest and most successful of these were Westone’s Wonder Boy in Monster Land, Namco’s Valkyrie no Densetsu, and Taito’s Cadash. Data East also jumped on the bandwagon in 1990 with Dark Seal, also known as Gate of Doom. 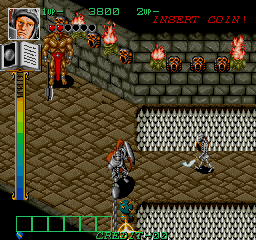 Dark Seal casts you as one of four characters, commanded by the King of Etrulia, to save the realm from the evil Volov and his right hand man, the Black Knight. Taking place in a medieval fantasy world obviously inspired by Dungeons and Dragons (even more so than the earlier similar games), each of the players fill a familiar role-playing archetype, illustrated via character sheets in the introduction. 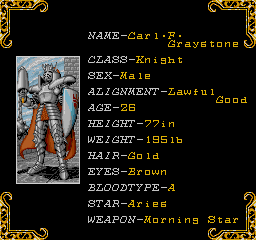 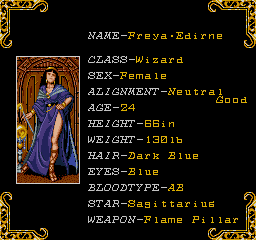 Carl F. Graystone is the knight, slow but wielding a powerful morning star, which is swung around in a circle. Freya Edirne is the wizard, subverting expectations by not being a bearded old guy but rather a woman who dresses in Egyptian-style garb. She wields a “flame pillar”, which shoots blazes of fire along the ground. 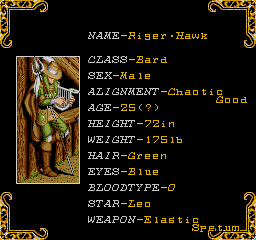 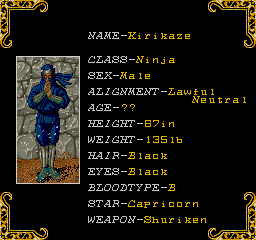 Riger Hawk is a bard, which one would think would be useless in an action game, but he holds his own thanks to a weapon called an “elastic spetum”, which is a sort of multi-headed spear that fires out shadow duplicates of itself. As a bonus, he’s also immune to poison. Finally, there’s Kirikaze the ninja, who attacks with shurikens. 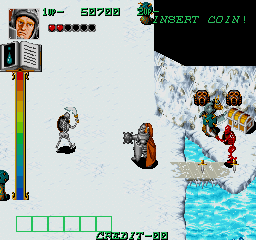 The levels are presented with an isometric perspective, though your character can move in all eight directions. There are treasure chests everywhere, which grant assorted items. Most are just for score, but some can temporarily improve your speed, strength, or defense. There’s also a magic meter, which slowly grows as you dispose of enemies. All of the characters can actually wield magic, not just the wizard. These are indicated by the book above the magic meter, which flips through the spell pages automatically, so you need to wait until it brings up the magic you want to use. 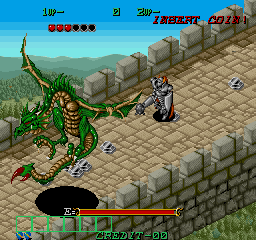 Once fully charged, you can press the secondary button to cast it, which will temporarily change your form and give yourself new attacks. You can turn yourself into a ball of flame to set things on fire, or a tornado to toss bad guys into the sky. Less typical magic includes turning yourself into a Medusa head to change enemies into a stone; a giant rat, which is stronger than you’d think considering you also control a small army of rodent companions; a boulder, which struggles with its own weight when it tries to move but can cause damaging earthquakes by jumping; and a treasure chest, which will spit out a handful of bonus items. However, despite changing form, you’re still vulnerable to enemy attacks, so they all feel underpowered compared to how much you need to charge up to activate them. 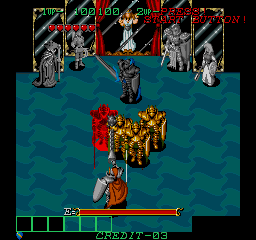 Despite all of these magic spells, equippable items, and character selections, the core of Dark Seal is fairly uncomplicated, rarely going beyond “walk forward and smash stuff”. It actually feels like an evolutionary mid-way point between the simple arcade action of Gauntlet and the slightly more elaborate hack-and-slash dungeon crawling of Diablo. 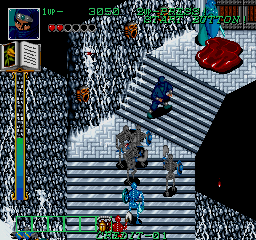 Working your way through the levels isn’t too hard at the beginning, as long as you’re careful, but the enemy numbers and strength can be overwhelming near the end. Plus, the bosses are the worst parts of the game. They’re huge, with attacks that are extremely difficult to avoid, and they take tons and tons of damage, which is especially a problem if you’re playing solo. The penultimate boss tosses out a huge number of status effects, including confusion, petrification, paralysis, and even turning you into a pig. It’s neat to see status effects in an action-arcade game, but it sure is massively frustrating. They do look cool, though – most of them are varying types of dragons, and they die in satisfying fashions – in the first stage, the boss’s head falls right off, while a later foe crumbles into pieces. 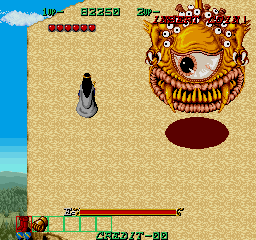 Outside of the dragons, the visuals are generally unremarkable. The sound design, however, is great. The soundtrack ranks right up next to similarly styled fantasy action games like Golden Axe and Rastan, and the numerous digitized sound clips of the warriors screaming all kinds of stuff are gleefully silly. 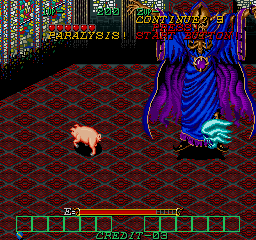 While nearly all of the arcade games that tried to implement RPG elements had some type of balance issues, Dark Seal is probably the weakest, and even its setting seems unremarkable considering the actual Dungeons & Dragons beat-em-up, which was released a few years later by Capcom. At least things improved a little bit in the sequel. 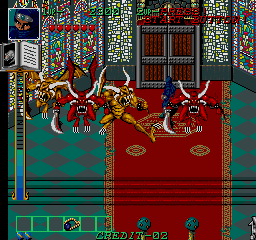