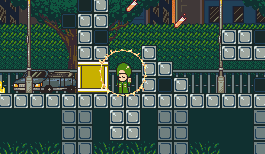 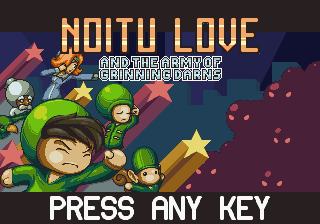 You might not be familiar with the name Joakim Sandberg, although it’s not unlikely you’ve seen his work. As a former animator for WayForward Technologies, he’s capable of some pretty impressive spritework, as seen in games like Contra 4 and Shantae: Risky’s Revenge. Outside of his professional efforts in the industry, he’s made a few games of his own, all of which were done entirely on his own. Two of these are the Noitu Love (“evolution” spelled backwards) series, a pair of games that pay some great tribute to different eras of gaming. Before you could buy independent games by the dozen off of services like Steam, the Noitu Love titles were probably some of the best independent action games for quite some time, and even now, they’re still worth checking out. 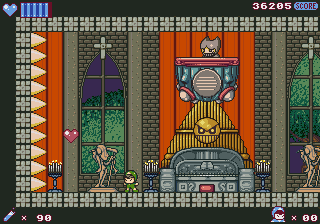 The year is 2188, and the world is at peace. Except for one particular unnamed city, brought under siege by mad scientist Darnacus Damnation. Only the Peacekeepers League member Noitu Love, assisted by his handler Lori, is able to make his way through the army of robotic “Darns” and save the city. It’s a pretty simplistic plot, to be sure, but the goofy boss characters that you’ll encounter spice it up enough so that it stays entertaining.

While the general style feels similar to NES platformers of old, the heavy focus on combat makes it somewhat incomparable to any other game of the era. Noitu has a three-hit punch combo and a spinning kick attack, performed by hitting both buttons at once. While the latter is best avoided since it leaves you pretty vulnerable, it’s easy to set it off by accident and take a cheap hit. Using this set of moves, you’ll fight through the waves of enemies the game sets upon you, often blocked off from progressing to the next part of the stage until you’ve killed just enough enemies.

Thankfully, while the combat’s somewhat simplistic, it gets enough right to prevent things from being too frustrating. The range of Noitu’s attacks mean that you never have to venture too close to enemies, most of which don’t deal contact damage, anyway. It helps that the game’s always pretty good at introducing new opponents, too, like dual-Darned cannons that can be easily dealt with up close, or Darn priests that create massive explosions if they’re not taken out quickly enough. The game also has a pretty wide variety of minibosses, and while none of them are particularly challenging, they do a lot to keep things fresh. 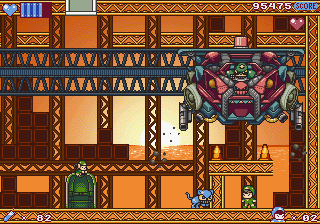 There’s a fair amount of platforming, as well, which is similarly decent, if somewhat basic. One particularly neat feature are Evomatics, machines scattered around the level that change Noitu into different forms. The monkey form lets him jump extra high and get through small spaces, the big brained form allows Noitu to access control consoles to activate things, and the bird form can fly around at will. Only the big brain form has any sort of combat capability, however, which means that you’ll always want to be normal Noitu whenever enemies show up. None of the platforming ever gets much more complicated than timing your jumps over spike pits, but it always makes for a nice break from the combat.

What the game lacks in complexity, it certainly makes up for in its pacing. It seems as though you’re always being introduced to a new enemy type or form to use, which helps keep things fresh. If there’s one particular highlight to keep an eye out for, it’d be the boss battles, most of which have some cool gimmick to them. One pits you against a Darn musician, who only exposes himself to attack once you stomp on his piano and get him angry. Another boss is said to have a “nuclear arm”, which turns out to be a literal, gigantic robot arm he uses against you. The penultimate boss battle against a gigantic mecha Darn might be the best of all, requiring the use of all of Noitu’s forms to defeat. It also features a particularly cool “rotating” effect as the copter you’re riding constantly circles your foe. Unfortunately, all the boss battles have a tendency to drag on, taking way, way more hits than required for you to learn their pattern. 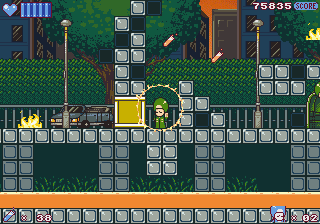 The graphics aren’t quite NES-accurate, using enough extra color and detail so that it more closely resembles a Game Boy Color game. For the sort of style it’s trying to imitate, it usually looks pretty nice, with some especially well-done backgrounds. Unfortunately, there are times when the backgrounds get so busy as to make it hard to tell what’s hazardous or not. Fire that looks like it should hurt you doesn’t, and trying to pick out the zombie Darns you’re fighting from ones in the background isn’t always easy. Unfortunately, the music isn’t quite as solid in its imitation of the 8-bit generation, and generally sounds rather “bleepy”, even off-tune, at some points.

While neither its combat or platforming are all that great, the variety Noitu Love offers is enough to keep it interesting throughout its short playtime. Despite its faults, it probably would have done pretty well for itself if had it been released in the 16-bit era. Still, it’s surpassed completely by its sequel.