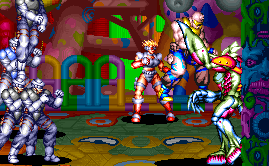 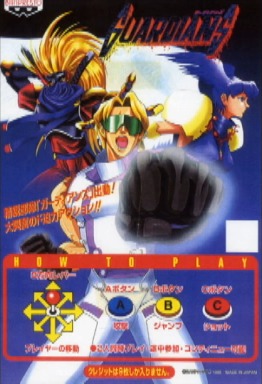 Though the title screen indicates the name Guardians, various logos in the game feature the subtitle Denjin Makai II. The name change probably occurred since Makai is no longer a playable character. Regardless, the roots are apparent. It takes all of the elements of its predecessor, speeds up the gameplay, enhances the graphics, and kicks everything up to extraordinary levels. 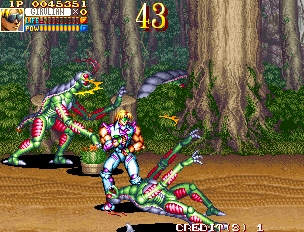 There are eight playable characters now, which may in fact be some kind of record. Each has four slightly different combo strings, depending on what direction you’re holding the joystick, and each still has a number of special moves, which are helpfully indicated on the character select screen. While the original Denjin Makai only used two buttons, Guardians uses three, with one solely devoted to a major powerful attack, which is usually some kind of projectile. This special button is used in conjunction with the standard attack and jump buttons to pull off the desperation moves. There are still weapons to find, in the form of swords, bars and bombs, but your characters already have a huge arsenal that they seem redundant. 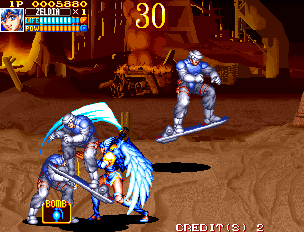 While many beat-em-ups have dashing attacks, the characters in Guardians walk forward automatically with combos, which makes attacking multiple enemies much easier. It’s also one of the few games of its types to have an on-screen combo counter, though the enemy health bars, outside of the bosses, have been removed. The special attacks still have their own power gauge, with replenishes automatically. However, if you do a special move with a lower power gauge, you’ll get an “Overcharge” warning, which refills the gauge at the expense of one life bar. The mechanics are mostly the same, though the action is speedier, and it’s one of the few beat-em-ups with vertical dashing, allowing you to somersault quickly upwards and downwards. 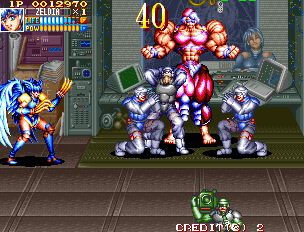 As far as the characters, there are many returning faces from Denjin Makai, although they’ve been given an assortment of makeovers and upgrades.

With Makai gone, Girulian takes on the role of the main player character. He’s a futuristic cop with a rather ridiculous pair of oversized green shades, which shoots out lasers, like Cyclops from X-Men.

The female cop from the first game returns, though now she’s got blond hair and a pony tail. She’s very similar as she was before, complete with a robot arm blaster and spinning kick. Her gun weapon is fun, since it can freeze enemies.

At the end of Denjin Makai, it’s revealed that Zeldia was in some sort of living cocoon form, and hatched into a creature with wings. That creature has evolved into this blue haired, female bird-like character seen here. She can spin fast to create whirlwinds, and can dive-bomb enemies too.

The super muscular wrestler from the first game is back, and is even more pumped up than ever. For his weapon, he wields an oversized pistol.

This upgraded version of Belva has new weaponry, such as blades in his knees and guns in his arms. He plays much differently than the first game.

A pink ninja with crazy long hair, Jinrei is so badass that he can throw shurikens faster than a gun fires bullets. He can also make waves of fire and perform other special ninja moves.

With Zeldia having transformed into a fast, bird creature, there was a hole to be filled for hulking behemoths. Skullbyule takes on that role, being a huge mutant dinosaur man. He attacks with everything from his tongue, to a secret tusk in his arm, to killer flies that are shot from his scales. 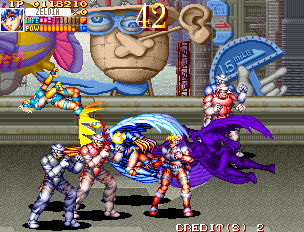 The diverse and outlandish cast are matched by an equally unique series of enemies. There are the usual generic thugs, robots and fat guys, but there are also thick, abnormally busty girls in tight dresses, walking bug creatures, and mutated reptiles with abnormally large alligator heads. The first level boss is an absurdly muscled female – even more over-the-top than Tulks – who twists her torso like a screw and throws a temper tantrum when you beat her. One of the enemies is named Fag: The Ersatzman (the offensive name was probably unintentional), a super hero parody, whose background is supplied via a holographic projector. The final boss is a multi-stage affair, a gigantic mass of flesh, metal and bone that hangs out from the oozing wall. 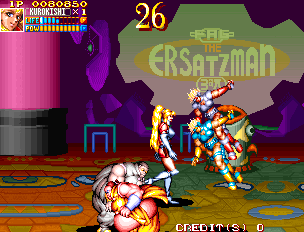 The levels are exemplary in the way that they flesh out the game world. When you go through the mall, you get to witness the bizarre fashions worn by the civilians of the city. There’s an amusement park, but it’s based off of Gulliver’s Travels, so you get to destroy small-scale models of gigantic buildings. There are different levels to choose from too – the first, fifth and sixth are set in stone, but there are completely different levels to be played for the second, third and fourth, making for an extremely meaty, heavily replayable game. 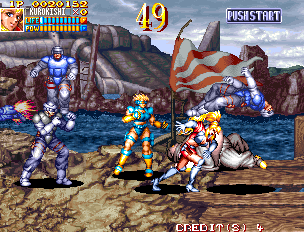 There’s also an extraordinary amount of detail poured into each stage too, equivalent to the sort of 2D love found in titles from Konami, Treasure or SNK. In the first level, you find a group of enemies setting up a card pyramid before the heroes burst in, unfortunately tumbling their creation. If you pay attention, you’ll find that the heroes bust a whole through the wall to enter this room, when there’s a perfectly capable door that opens up right to them. 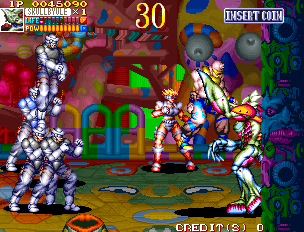 Later in a cafe, you can see some bad guys conversing in background, ignoring of chaos happening around them, until you defeat a few enemies, realize that they’ve been slacking, and hop into the scenery. In the sewers, you can find a bad guy scribbling on the wall with graffiti, designing the Banpresto logo. Many foes fly onto the battlefield on hoverboards or floating mechanical balloons, but occasionally you’ll find some being delivered by a small squadron of birds. Like every beat-em-up, some of the enemies are obese guys, and sometimes their overwhelming weight will cause them to crash their hoverboards before they can enter the fray. The amusement park is home to a taco truck, but destroy it and the owner will respond with one of the most horrified looks imaginable. (The same guy was in Denjin Makai, too.) Behind one of the models, you’ll also find two gang members who appear to have snuck off for some hanky panky, which you summarily interrupt. 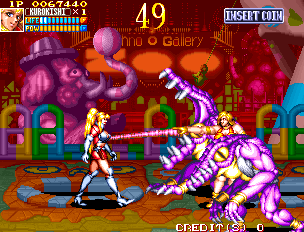 Bonus pick-ups include stuffed plushie variations of the enemy crocodiles, and trick present boxes, which, when picked up, will punch your character with a spring loaded fist. And hidden throughout most of the stages is a squid. It’s the same squid, every time, and it never attacks you, it just makes an appearance as a random, as recurring sight gag. There are also a few bonus stages where you pick up a gun and fire at targets in the background, like a shooting range. 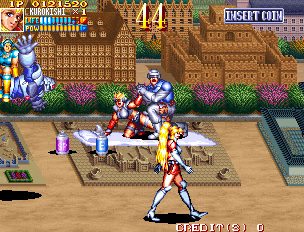 Unfortunately, most of the plot elements and dialogue from Denjin Makai have been stripped out, and characters no longer have unique endings. The plot seems fairly cool, and it would’ve maybe helped explain why Girulian, the big bad guy from the first game, is now the main character of this game. Maybe this is meant to be a prequel? 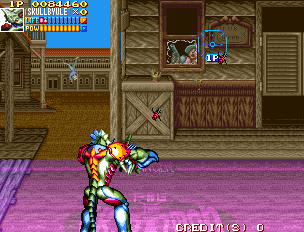 It’s no hyperbole to say that Guardians is one of the best best-em-ups ever made. The action is fast, the moves are diverse, the amount of content is insane, the level design is fantastic, and the game world is incredible. The tragic thing is that, due to its timing and the inevitable death of the arcade beat-em-up, it never saw much distribution, nor was it ported anywhere. 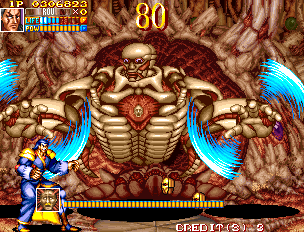 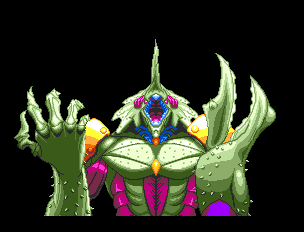 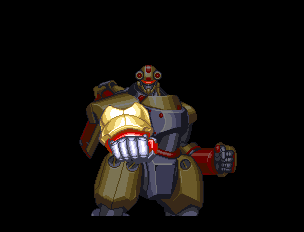 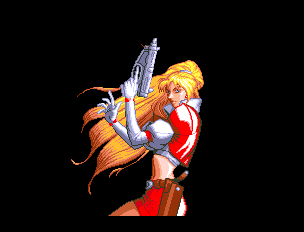 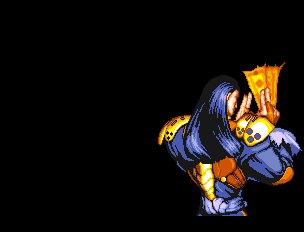 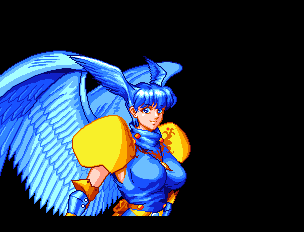 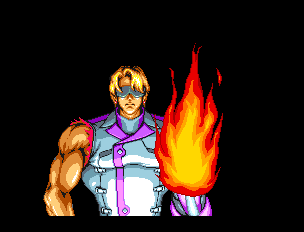