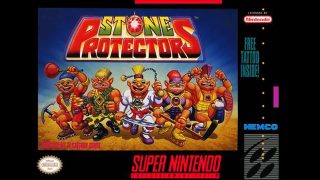 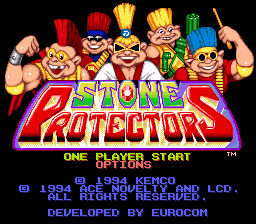 If you’re even remotely familiar with pop culture, you’re probably aware of the fad of the “Troll dolls”. To cut a long story short, at some point a bunch of marketing executives thought they weren’t selling enough. The solution they came up with was to make new toylines marketed to the sorts of young boys who were out buying Teenage Mutant Ninja Turtles toys. None of these attempts were particularly successful in the long run, and the entire idea was quickly shelved. An attempt by the Ace Novelty Company, however, managed to get its own cartoon. And from that cartoon would spawn a video game, one with a license so flimsy that Konami would never even give it the time of day. 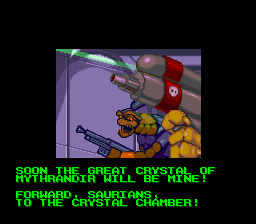 The game’s plot follows the cartoon, such as it is. An evil troll by the name of Zok is attempting to steal the legendary Great Crystal of Mythrandir. The good Empress Opal splits it into six pieces, five of which make their way to New York. From there, the five gems imprint themselves onto five members of a rock band, granting them weapons, powers, and transforming them into traditionally unappealing “troll” forms. Sprited away to the kingdom to Mythrandir, Empress Opal presses the band into journeying across the land, beating up Zok’s army of reptilian henchmen, and recovering the last shard of the crystal. Well, at least nobody gets kidnapped, unless you count the heroes themselves. They seem to be surprisingly OK with their situation, all things considered. 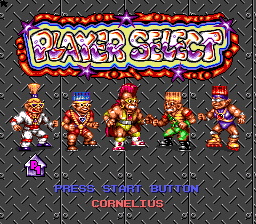 The five Stone Protectors themselves play mostly similarly, aside from having a few unique special moves. Cornelius has a katana, Chester is a pro wrestler, Clifford climbs, and thus hits people with a grappling hook. Angus, in probably the biggest swerve from any beat-em-up, carries a gun and grenades at all times, which seems a tad extreme for a children’s cartoon. Maxwell is an “accelerator”, which is a fancy way of saying that he roller skates. That’s somewhat of a downgrade, compared to Angus.

When you first come to grips with the controls, you might find yourself pleasantly surprised. Not only do you have buttons for jumping and punching, but also buttons for kicking and using your character’s personal weapon. Each of the three attack buttons also have a special attack that’s performed by holding the button down, at the cost of some health. On top of that, every character has two hidden special moves performed by performing a motion, and then pressing a button. This all sounds promising, but each of these features hides a fatal flaw somewhere.

Your attacks always feel sluggish, with many leaving you open for an enemy to smack you. Your best option is to stick to your faster-firing punch combo, but even this comes with some caveats. For one thing, your stubby troll arms mean you have to move close to your enemies, where you’ll have little chance to avoid their fast attacks. Even when you’re in range, if your opponent blocks – and they do, frequently – they’ll often counterattack before you can do anything about it. Grapples, while possible, seem inconsistent at best when they actually happen, and are almost never worth their damage output. 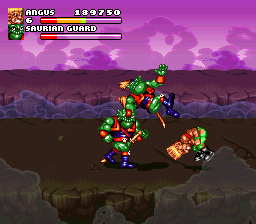 As for the special moves, the fact that you have to stand still and hold a button means enemies will often take the opportunity to hit you while you’re charging up. Most alarmingly of all, however, is the fact that there are no crowd control moves of any sort. There are a few special moves where your character spins around with their arm or weapon outstretched, which you would imagine would serve that purpose. These moves can’t be used without charging however, which means that if you get hit, all you can do is try to walk away from your attacker fast enough you won’t eat an entire combo. To make matters even worse, enemies can block and interrupt your special moves just as easily as any other attack.

Oh, and those hidden special moves? To perform them, you have to use the shoulder buttons, which at no other point in the game are you required to use. 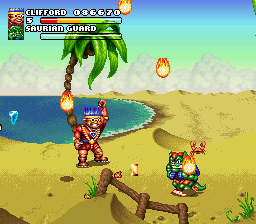 Even something like this never really feels quite worth the effort.

While the game will always no more than three enemies on screen at one time, it attempts to make up for this by making them aggressive. They’ll often gang up on you, and hitting one enemy will cause one of its partners to quickly jab you into a combo. Oftentimes, they’ll attempt to attack after knocking you down, and if you’re especially unlucky, this can lead to an inescapable loop that’ll consume your entire life bar. Cheap hits are also common, as enemies frequently fall into the screen and right onto your head, or attack before they’ve even wandered their way on screen. That’s what you’ll deal with on the easiest difficulty, while on the hardest difficulty, they’ll frequently use their fastest and most damaging moves non-stop while they make a beeline straight towards your troll. 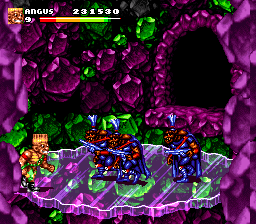 The bosses are even more frustrating, as while they share the aggressive AI and moves that have little to no telegraphing, their health and damage are pumped way up. It usually only takes about four or so hits from a boss’s strongest attack to empty your life bar, and they’re never afraid to use these moves as often as possible. Perhaps the worst example of this is the boss of Stage 2, possibly the worst designed boss featured in a 2D beat-em-up. This boss, some kind of goofy looking mining machine, features a weird hitbox that also harms you upon touch, and if it hits you from the front, it’ll repeatedly knock you down until you’re dead. To be safe, you have to slowly whittle its health down, hitting each time it passes by, a process that takes entirely too long.

One of the few ways to make the game somewhat more fair is to pick Angus, although not for his gun alone. The enemies, surprisingly, are smart enough to block and sidestep his shots and punch him in his big-haired face. Rather, you’ll want to make use of two moves of his, which when combined, make the game lose almost all its challenges. His jumping shot attack has a weird hit box, but it’ll pierce through multiple enemies who often have no idea how to avoid it. Combine that with a special move that turns him invisible, making non-boss enemies far less likely to target him, and you have a combination that’ll carry you through a much duller game. These moves don’t even cost any health, so you can simply slap on a new coating any time you spot enemies and keep on going.

Angus makes the game far easier to the point where it gets painfully dull, but given what the game throws at you, you need to use every advantage you can get. The only times the other characters ever get almost as good as Angus are the rare extra weapons you can pick up, like whips, shuriken, hockey sticks, and flamethrowers. These can be used to knock down enemies and keep them pinned until you get knocked down yourself, which makes foes far more manageable than before. One caveat is that every character has one weapon they will not pick up for no clear reason. Apparently Angus is perfectly fine burning Zok’s minions to death, but he can’t whip them, because that would be cruel, or something. 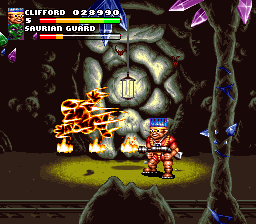 Clifford is enjoying this a little too much.

The ten stages will take you about an hour to get through, each of them lasting just long enough to get on your nerves. It doesn’t help that you’ll have seen every enemy type the game has to offer by the second stage, with only one not being some manner of orc or lizardman. Even the game’s required elevator sections take up two entire levels of the journey, and with only three enemies on screen, they never get to be all that thrilling. Losing your focus and getting sloppy isn’t an option, however, as running out of lives is an immediate game over, forcing you to start all over again. Extra lives are fairly common in some attempt to make up for this, but the bosses alone will chew through your supply with record speed. 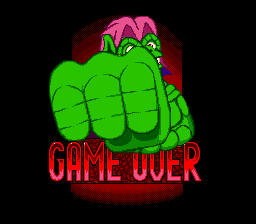 An accurate depiction of having to start the game from the beginning.

Somewhat novelly, the game features a mode where the CPU will take control of the second player and fight alongside you. It’s a neat idea, but the AI needs work, as it’ll often stand in place while you fight enemies, and it tends to pick up the items that would be more useful for you, the human. It’ll generally run out lives by the third stage, leaving you with less lives than you would have had on your own. Still, while it lasts, it’s admittedly a cool idea that would have been done better in games years down the line. There’s also a simplistic versus mode for two players, which one can imagine Angus will top the theoretical tier list of.

If there’s anything nice that can be said about the game, it’s that it actually looks rather pretty. The chunky sprites fit the cartoon’s art style well, such as it is. (The SF2-style ‘burning body’ sprite seen on enflamed characters might be somewhat too hardcore for the audience, however.) The game makes use of transparencies, fog, and lighting effects to give life to its backgrounds, and these are probably the real highlight of the game. The lava effect on the final stage alone is frankly more interesting than any of the combat, by that point. 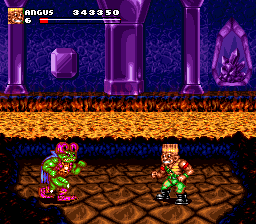 The sound effects are meaty enough that there’s at least some impact to the combat. The music features an overdose of synth guitars, leading to most likely the most metal soundtrack ever written for a children’s licensed game. It’s not always like this, however, with some stages featuring softer, more ominous tunes that give a little more aural variety. In a nice touch, the music will begin to transition as you approach the boss, going into a remix of the level theme as you begin the fight. 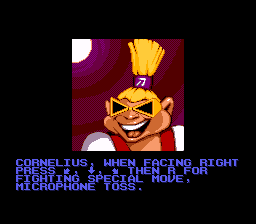 Overall, it can’t be said that the developers of Stone Protectors didn’t try, it’s more that they simply put their effort into the wrong things. The high difficulty level and sluggish controls hold back what could have been at least a mediocre brawler. What we’re left with, unfortunately, is a game designed by people who had heard of what a beat-em-up was, but hadn’t experienced anything close to how we understand them. It is, at the least, ambitious, and credit is earned for the fact that it’s not some manner of generic platformer that it well could have been. At the very least, it beats the Mighty Max game any day.

A Genesis version was in development, but was never released for unknown reasons. The ROM can be found online, however, aside from a level select in the options, it feels ready for release. In this version, characters feel somewhat faster overall, although not quite to the extent to fix the fact you’re always having your moves interrupted. You also have more air control, which makes landing air attacks a lot easier. The hidden special moves are now mapped to the punch and kick buttons, making them far easier to do – sometimes by accident. Best of all, the Stage 2 boss is far easier, which fixes one of the worst parts of the entire game. On the downside, the colors are far more muted, some of the nicest graphical effects are missing, and some of the cutscenes are missing.