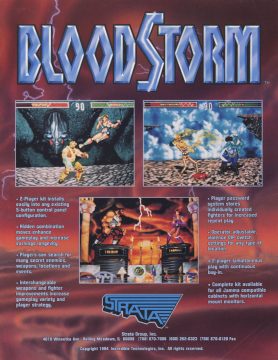 Two years after Time Killers went as quickly as it came in the arcades, Strata would release another fighting game. It’s an improvement from Time Killers, in a few ways, and it definitely has a little more effort and originality put into it. It’s far from a spectacular fighting game, to be honest, but it’s just about as much goofy fun as Time Killers, if not even more so. And being goofier than Time Killers is not an easy feat to achieve.

Before discussing the game proper, however, there’s something that should be noted. On the game’s release, Strata released a flyer for the game. This flyer features Daniel Pesina, the actor who played Johnny Cage in the first two Mortal Kombats. He’s dressed in Johnny’s outfit and everything, standing in front of a BloodStormcabinet and looking far happier about it than likely anybody who played BloodStorm. According to urban legend (dismissed by John Tobias and Daniel Pesina), this appearance led to Daniel being fired from Midway. It’s thankful the rumor didn’t turn out to be true, because the man certainly didn’t pick the right horse to bet on in the long run. 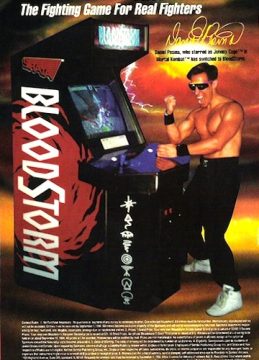 The game proper begins with an attract mode, showing the emperor of post-apocolypse Earth being assassinated by a mysterious assailant. And quite gorily, too, with the poor guy’s intenstines clearly showing before you even put in your quarter. “Hey, kid,” the game seems to be telling you. “You like Mortal Kombat? You like intestines? We have all the intestines you want right now. Why play those other pansy games that make you work for it? Wait, why are you looking at Samurai Shodown like that? Come back!” In any case, all this leads to the rulers of the provinces of Earth having to beat each other up to become the ruler of the new Urth. Sorry, Earth.

The eight standard fighters that lead the provinces of Earth are all somewhat generic, although here it’s more in the way that looks like they fell out of a 90’s independent comic book. Among a couple of cyborgs and ladies in skimpy clothing, you’ve also got, in the wealth of originality you can expect from Strata by now, a fire guy and an ice guy. The character concepts are a little better, since you’re not left with a bunch of generic archetypes, it’s just that their designs don’t really do much in terms of excitement, either. One unique thing about the game is that most of the characters are actively terrible people who generally make things worse for everybody in their endings, with one highlight being an ending that simply states “HELLHOUND TAKES CHARGE! SCORCH RULES! THE PLANET BURNS!”. 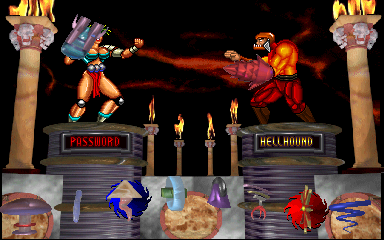 The control setup has changed entirely, to something a lot closer to Mortal Kombats button layout. You now have buttons for your front and back arms, as well as a separate button for blocking, which means you can sadly no longer headbutt your opponent to death. The unique basic attacks the characters had have been phased out for Mortal Kombat-style sweeps and uppercuts as well, which seems somewhat like a step backwards. Every character also now wields a CGI lump on their front arm, which the game refers to as a “Gauntlet”. They’re a little different than the weapons from Time Killers, since they don’t change your character’s moves, but they do make certain attacks more powerful, as well as giving each character another special move. 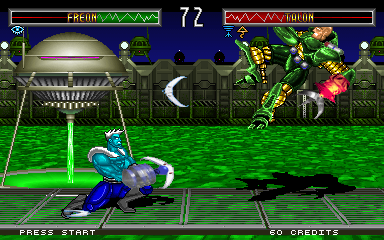 Dismemberment generally works the same way as Time Killers, with arms randomly being lost, and stunned opponents are still in danger of being instantly decapitated. The main differences are that decapitations are now done by special moves, which prevents them from being quite as abusable as before. Not to say they aren’t, because any sort of stun basically means the round is over. At least the game is kind enough to warn you if the next hit will put you in a dizzy state or not. The fatalities are a little tougher to pull off as well, with Mortal Kombat-style inputs, and they all generally have a little more effort put into them, even if they all end with the opponent exploding into a pile of limbs.

There’s also the addition of the Sunder, a low-hitting special that only works on the opponent if they’re stunned. If it connects, you remove their legs entirely, letting you make as many jokes about them being “half the man they used to be” as you please. Of course, it doesn’t actually kill them, and the opponent still has the chance to fight back and move around with their arms. If they don’t have any, well, they’re pretty much finished, but they probably weren’t going to win, anyway. 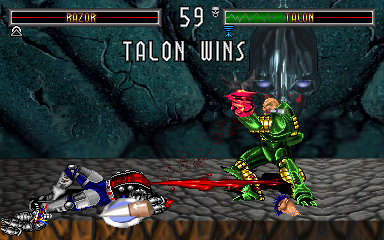 The characters generally have a few more special moves then they did back in Time Killers, and there’s a little more effort to make them more interesting. You’ve got characters who can do a wake-up attack after being knocked down, characters who can freeze or otherwise stun the opponent, and characters who wall jump. It’s a nice change from Time Killers, where it was somewhat of a surprise if your character actually had a projectile. There’s also a rather odd gimmick where every character you defeat, whether human or AI, will give you one of their special moves you can use for yourself, like you’re some kind of hyper-violent Mega Man. Unfortunately, losing a match means you lose all these extra moves, which means the gimmick isn’t quite as useful as it could have been. 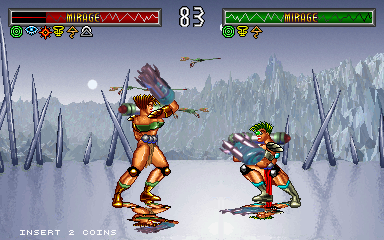 In terms of overall gameplay, it’s a little tighter than Time Killers, and it’s definitely a much faster game. The problem is it that it now feels a lot more like an Mortal Kombat clone, due to the controls, which may or may not be an improvement for some. The problem is that for all the new moves they added, your best tactic is still to try and hack off as many limbs as you can. Much like Time Killers, special moves are generally so punishable that your basic moves are almost always the most effective way to end a fight. In fact, matches can end even more quickly, at times, as some stages have hazards that can instantly kill an opponent with as little as one uppercut. One stage, for example, has a pit that will send your opponent falling onto a stalagmite. (If this happens to a female character, you’ll get as much of their thong as you do their intestines. You’re a class act, Strata.) 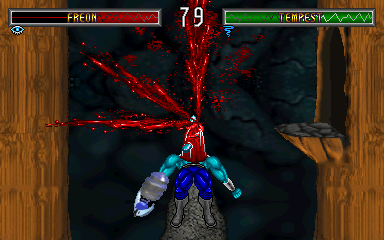 If you know the right moves to use on the AI, the single player mode is generally never that rough, especially since the AI’s actually surprisingly poor at defending itself against an aggressive player. There are actually a few subbosses this time around, starting with Sin, a dominatrix who hangs out in a room with enclosing walls. Not only do these cut off where you can move, but if you spend too long fighting her, spikes will shoot out of the wall and instantly kill you, and strangely enough, not Sin. This is probably the toughest point of the game, since she’s so good at completely plowing through all your moves that the two bosses after her are somehow much easier. After Chainsaw, a CGI flying… thing of some description, you fight Nekron, a big CGI man who looks somewhat like a robot. He’s actually easier than Death, somewhat, if mostly because he’s far too aggressive to actually block. 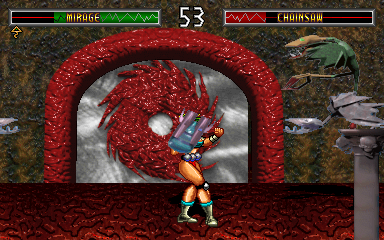 Besides the bosses, there’s an insane number of secret characters hidden in the game, especially considering that Time Killers didn’t have any. Some of these are so easy to find you’ll encounter them entirely on accident, while others have some ridiculously obscure conditions to find them. One involves finding out that you can actually leap into one of the backgrounds of one of the stages, and then doing this multiple times until the secret boss shows up. While pretty much all of these characters are just palette swaps, they’re also much more powerful than than most of the regular characters, which means they’ll probably wreck you. The highlight of these hidden challengers would most likely have to be Blood, a guy who’s entirely red, and whose head is an eternally spouting jet of crimson. Which, oddly enough, can also be decapitated, just like everybody else. 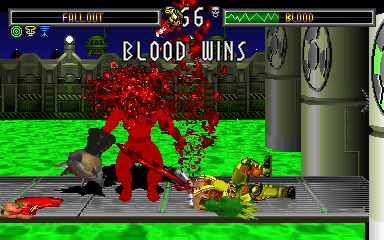 If anybody asks you what the era of Mortal Kombat clones was really like, just show them Blood. They’ll understand.

In fact, there’s an absurd number of secrets and codes, possibly even more than the actual Mortal Kombatthemselves. You’ve got big head codes, including the head of one Senator Joe Lieberman. You’ve got codes for the secret characters, codes to give yourself all the earnable powers, codes to select certain levels, and codes to call your defeated opponent a bitch or tell them the address they can send money to for the BloodStormhandbook. Yes, really. The game has a variety of codes that print silly messages across the screen, including such timeless phrases as “DON’T WIZZ ON THE ELECTRIC FENCE”, “DRUGS SUCK” and “I WOULD TRASH TALK YOU BUT YOU CAN’T HEAR ME SINCE YOU ARE DEAD”. Among a few dozen others. 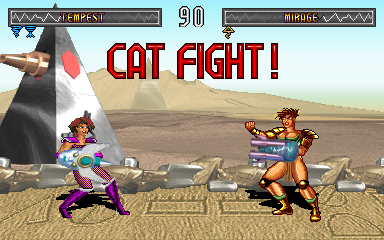 The graphics are a little better than in Time Killers, and the sprites don’t generally look like they’ve come straight out of Deluxe Paint as before. The tradeoff is that the backgrounds, which were charming in a handdrawn, amateurish sort of way, have been replaced with gratuitous amounts of CGI. It’s pretty dated, as you might imagine, and it’s especially clashing when you have standard sprites over it. The music, while pretty generic, at least doesn’t do that thing where the two fighter’s themes try to drown each other out, which is a plus. 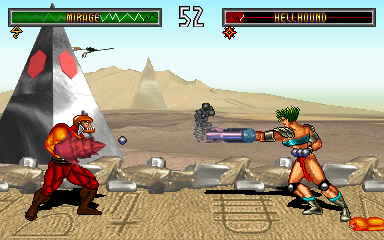 Overall, BloodStorm is a better game than Time Killers, and much more so. However, that does not mean it’s a good game. For all its improvements, there’s still pretty much no depth to the gameplay, or any reason to use all of the new stuff it introduces when just smacking your opponent is so much easier. For as much as it tried to hype itself up as an Mortal Kombat killer, it’s especially ironic, since it feels even more like an off brand of that particular series. 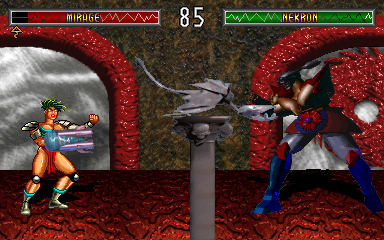 So, what happened to Strata? Surprisingly, Capcom recruited them to create the arcade version of Street Fighter: The Movie. While it obviously lacked the dismemberment, it still gave Strata’s unique feel to the classic fighter, including tons and tons of secrets and weird mechanics. After that, they quietly faded into arcade obscurity, releasing revision after revision of the Golden Tee golf game. A shame, really, for two games that defined what a “Mortal Kombat clone” was so well.