Spanish developer Locomalito has been releasing 8- and 16-bit inspired retro games since 2008, from just around the time when the XBLA and Steam created a commercial marketplace for such titles. In spite of this, their titles were released as freeware, despite being of higher quality than most “professional” titles. In 2016, they released Cursed Castilla EX, a revamped version of their 2012 side-scroller Maldita Castilla, on both consoles and computer platforms. 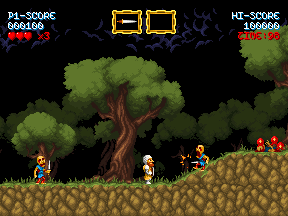 Most of Locomalito’s games are inspired by assorted arcade and console classics – Maldita Castilla is basically Capcom’s Ghosts n’ Goblins. It even keeps the 4:3 screen ratio of classic retro games. The hero is Don Ramiro, who sets aside the countryside on a holy mission for his king, though looks and controls much like King Arthur. He can chuck swords (or other projectiles) in four directions, and the jumping controls are similarly rigid, though you do have some control over his jumps. The basic style is similar, right down the map screen, and most of the game taking place against the darkness of night. 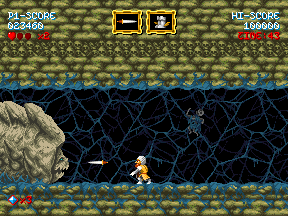 But Maldita Castilla is also careful enough to avoid nearly all of the issues of its forebear. Ghosts n’ Goblins is most well known for its difficulty curve, or more appropriately, its lack thereof. The series was one that hated the player, with devious level design, randomly spawning foes, sparse checkpoints, and power-ups that often cursed you. This game largely does away with much of that, with various concessions to make it more approachable. Don Ramiro can take three hits over Arthur’s two, respawn checkpoints are placed at every scene transition (there are at least a few in each stage), and treasure chests will almost always contain some kind of bonus or power-up. You can even let weapon items sit and cycle through all available types – arcing axes, boomerang-type sickles, bolas – before picking them up. A secondary item slot also contains other items, including score multipliers, double jump boots, a shield to absorb a single hit, and a fairy, who floats alongside you and attacks. 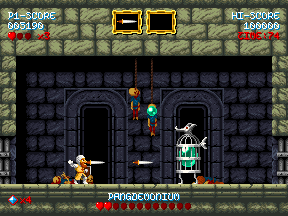 The game is still quite difficult, but it’s also fair. There are very few points where the level or boss design is outwardly cruel, and with enough tenacity, even novice gamers will see their ways towards the finale, even if it may take a few dozen (or more) credits. But it’s also here where Locomalito chose to adhere to its retro arcade roots – just running through the stages will result in a bummer of a conclusion. If you want to reach the final stage, you need to collect five tears, which are hidden throughout the various level. And even then, that’s not enough for a happy ending – to get that, you’ll need to beat the game using less than four credits. And to get the best ending, you have to fulfill a bunch of obtuse requirements, in addition to beating the game on a whole credit. The conditions of these are listed on the ending screen, so it’s not too confusing, but the message is still clear – if you want to see all Maldita Castilla has to offer, you need to really know it, inside and out. This is a far more rewarding approach than most challenging retro games of the era. 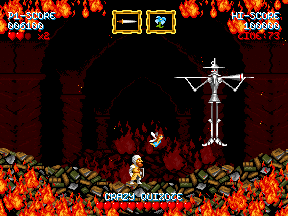 If there’s any downside to the game, it’s that it patterns its core a little too closely after Capcom’s games. All of Locomalito’s games are based on classic titles, to some extent (Castlevania with The Curse of Issyos, Gradius with Hydorah, etc.) but Maldita Castilla adheres to its inspiration more closely than most, and could’ve used something else to set it apart. The most original aspect are its monsters, taken from various Spanish and European folklore. The EX version even includes a guide which illustrates many of these in the style of classic chivalry literature, particularly The Amadis of Gaul. Even though these are pretty similar to standard fantasy game tropes, it’s cool to learn the myths behind some of these creatures – for example, instead of Medusa, you fight Moura, a shapeshifter who can take the form of a snake. The crazed Don Quixote boss is a standout too, though the enemies that are clearly based on the Firebrand/Red Arremer enemies are a little too blatant. 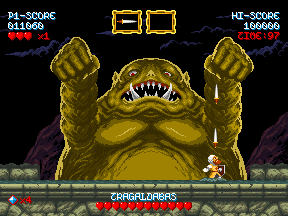 There are also various mechanics and tributes to other classic games too – at the end of each stage, you need to grab a floating cross, similar to the orbs of Castlevania, and some levels have keys that unlock doors found later in the stages, much like the Dracula X games. One of the monsters in the EX version is the Pangdemonium, a demon that unleashes bubbles that bounce around the screen, like the Mitchell game Pang (also known as Buster Bros.) The levels are also filled with ropes and chains to climb, making these areas feel a little like Capcom’s Black Tiger. The music, composed by Gryzor87, was created using a emulated YM2203 sound chip, which was used in several arcade boards, including many Taito and Capcom games, like (again) Black Tiger. It’s a perfect accompaniment the game – especially the boss tracks – and there’s a ton of music too, with over 50 tracks in the EX version. 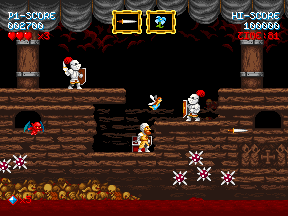 The freeware version of Maldita Castilla contains six levels. The commercial version, published by Abylight Studios, contains two extra stages – an aqueduct and a cavern, added in between the fourth and fifth levels of the original release – along with new enemies, bosses, and music to go along with them. There are two new weapons too: three-way daggers and arcing holy bombs. Numerous other tweaks have been made too, like the locations of some of the tears, and the names of the areas, plus display options to stick an arcade-style marquee on the sides. It’s well worth paying for one of the most well designed indie retro titles out there. 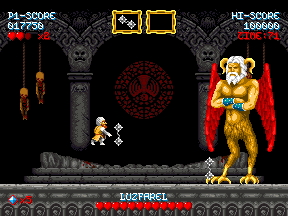