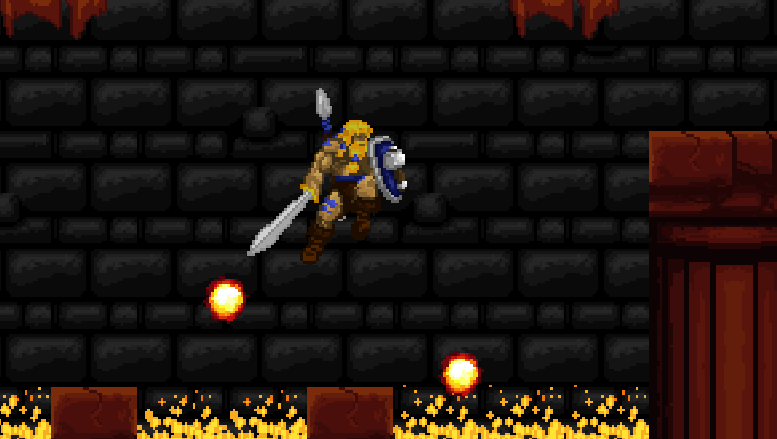 Long ago, there was a time when men were still true men; when unleashed, savage barbarians wandered the earth, always searching for a greater challenge and a path to ultimate glory. To them, no task seemed too hard, no score too high. Women – if they existed – were there to aid the male leaders or to be rescued as trophies. The elder ones among you might remember those mythical days of wonder, savagery and simplicity as “the eighties.” 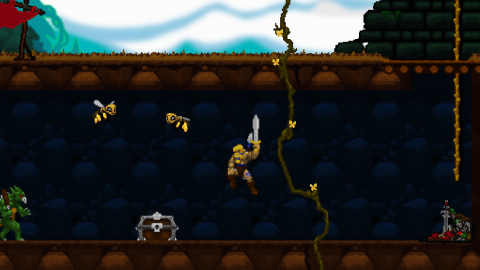 Völgarr appears like a long lost visitor from this testosterone-driven era. Inheriting his fashion sense from Conan the Barbarian, all he needs are his trusty sword, his shield and loincloth. His presumably Norse origin doesn’t matter. All that matters is the fight. And what a fight it is.

Völgarr the Viking is not ashamed of being essentially a fan remake of the Taito classic Rastan. To the contrary, it wears that label with pride, paying its respects by modelling the first few steps closely after the 1987 arcade hit – and by shoving Rastan’s rotten corpse in a corner. But while Rastan is the most obvious inspiration, it’s not the only one by any stretch. The creative leads at Crazy Viking Studio have already proven that they “get” classic sidescrolling action with their contributions to Shinobi‘s return on the 3DS, after which they decided to go independent and let their love for the ’80s action-platforming arcade experience run wild. 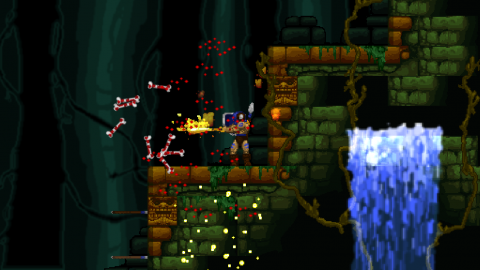 Accordingly, Völgarr stays closer to his roots than the time traveling ninja. The Viking’s combat maneuvers are limited to an ordinary slash, a downward attack from mid-air, a rotating double jump attack and an endless supply of throwing spears. The game excels through mechanical efficiency rather than flashy combos and acrobatic juggling. Success and failure depend entirely on the player’s mastery of Völgarr’s moves, their range, time frame and peculiarities. So slashing with the sword allows him to walk backwards for a brief moment: an ocean of possibilities if applied adequately, a frustrating deathtrap for the less agile. Jumps have a fixed trajectory familiar from classic Ghouls ‘n Ghosts or Castlevania, but like in Rastan, pressing the opposite direction allows to slash backwards while in the air. It is this profound understanding of what made the classics feel so tight, so fast, and so satisfying, that makes the game seem more genuine than any other attempt at recreating the magic of the old days.

Climbing ropes and sliding down slopes also works similar to Rastan. The game features a double jump, but compared to many other modern games, the stiff jumping mechanics ensure that it has a purpose and is not just a fancy replacement for a single long jump. Only Völgarr’s evasive roll seems a bit more modern than the rest, but given how greatly it expands the range of possible combinations, it’s well worth the small clash in style. Even more satisfying is the ability to create platforms (and sometimes shelter) by throwing spears at walls, adding a subtle sense of interactivity that many of the old games lacked. 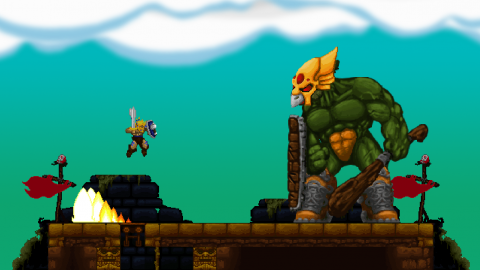 Despite his appearance as the manliest of men, Völgarr is surprisingly fragile, though. A single hit makes him lose his wooden shield, and a second means sudden death for the warrior. The shield can be used to deflect attacks when standing still, but it cracks after only two hits. This is where the treasure chests spread throughout the stages come in handy: The first always contains an upgrade for the shield, which makes it indestructible and allows the hero to charge up powerful lightning spears. It doesn’t make the man himself more durable, though. For that he has to crack open a second chest and get the horned helmet, which grants him one more hit point. The following flaming sword not only looks impressive, but also doubles his attack power, but on the downside it is always lost together with the helmet in one single hit.

The distribution of power-up containers is fair, but hardly enough to give you the upper hand in what might first appear as a hopeless fight. Enemies are very deadly until you figured out their movement patterns, and encountering a new enemy type often results in death. The game’s focus leans more towards varied repetition of known elements, though, so it’s more a test of agility rather than a memorization game. At certain points, most will need a few tries to get through a particularly vicious combination of enemies, which often complement each other to break the player. The second world, for example, features three types of humanoid toads: The green ones have a rather wide range with their tridents, so they have to be attacked from afar. Then they team up with their blue brethren, who always make a huge leap forward just the moment Völgarr throws his spear. The red ones, finally, dive down below the projectiles. Now this may sound simple on paper, but as soon as all three types attack at once (and together with more different enemy types), they quickly become much harder to manage. Also, don’t be intimidated by the lack of any apparent function to save your progress: By going left at the beginning of each world, those who have been beaten at least once can be easily skipped. 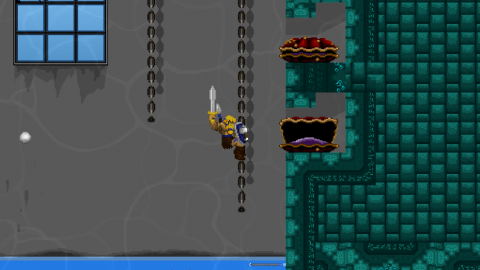 All that wouldn’t be much of an obstacle, if it weren’t for the game denying comforting features such as quick saves and frequent check points. Each world is divided into two rather large sections, but that transition is the only restart point. Only the final(?) stage is broken up into much smaller segments. To the experienced player a stage doesn’t take more than five minutes, but in the beginning this can be very daunting. It really isn’t as annoying as it sounds, though, with one exception: The no checkpoints policy also applies to boss fights, so if you just got there by the skin of your teeth and are obliterated immediately, prepare for going through a 5-minute stage again for every single try to learn the boss’ pattern.

After that, the bosses aren’t all that difficult. Each one has a very simple strategy that just needs figuring out. The enormous lizard at the end of the first world, for example, carries a wooden shield perfectly suited to stick in spears as stepping stones to reach its head – and never linger on too much within its range. Two thirds of the bosses are impressive monstrosities worthy of the name. The rest is a bit disappointing as palette swaps of regular enemies, but what they lack in size they make up for with agility. Then again even some of the mooks are almost screen-filling. 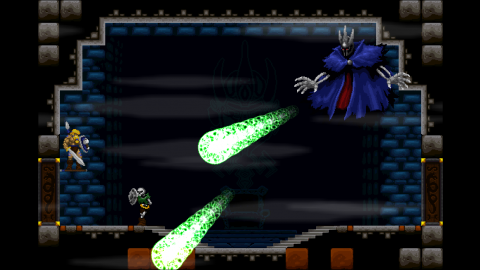 With only six worlds, a speedrun through Völgarr the Viking is rather short, but it will take a while to get to that skill level. As soon as you start getting flawless runs through the stages, though, you’ll discover that the game is actually much larger: When opening more chests with a fully upgraded Viking, the rewards will become ever more valuable loot, until a Warrior Spirit is set free, which makes a Valkyrie appear, who takes Völgarr to an alternate area of the next world. While the regular game allows for unlimited tries, here you’re strictly limited by the amount of previously collected Warrior Spirits, and losing them all drops you back to the normal route – after which you’ll have to replay the entire previous world for another shot at it. At this point it’s already beyond “well worth your money”-territory, though.

Being on the alternate route towards the end of the game also leads to a wholly new final boss, and another one of several endings, so there’s really no reason to complain about a lack of replay value. The swag collected on the way also translates to online leaderboards, but only in the Steam version of the game. This also features a range of achievements, but none of them are very inventive or challenging. 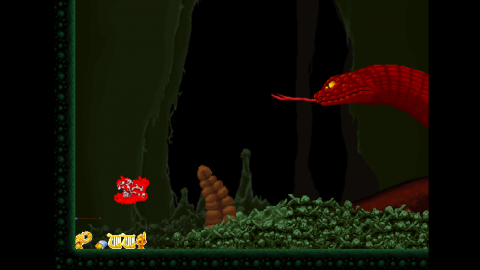 Disregarding all of the game’s genuine arcade qualities, Völgarr‘s graphics actually look more like an European home computer conversion of a late ’80s arcade game. The sprite work is all very solid, but some of the surroundings look rather bland and sketchy in comparison. Especially faraway background elements like clouds don’t blend in very well. While the majority of the graphics uses a low resolution, some of the special effects disregard that limitation. This make for a somewhat untidy overall look, and there is no low resolution that is truly native to the game. Setting it any lower than 1024 pixels wide results in ugly pixel distortion or forces you to turn on the bilinear filter.

To be fair, though, the game has a very good reason for the resolution discrepancy: Pressing the space button switches to a zoomed-out perspective that gives a nice overview of the surroundings and amplifies the sense of total control even more. By default the view zooms back in after a few seconds, but it can also be changed to a toggle in the options menu. Only in this mode the full appeal of Völgarr‘s visuals becomes obvious. 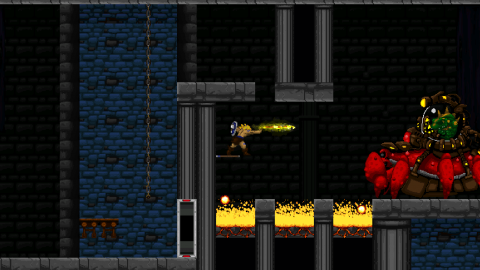 Another factor that sets Völgarr the Viking apart from its platforming role models is the high degree of graphic violence, which is more akin to something like Golden Axe. Enemies don’t simply explode or disappear like they used to do in 8-bit times, but burst into a gory mess of blood and bones. The same happens to Völgarr, who is resurrected by Odin from skeleton form at the beginning of each game, subtly implying that each attempt at beating the game is in the same continuity, an endless history of gruesome deaths.

The guys at Crazy Viking Games are certainly on the best way to build up their reputation as some of the few true defenders of vintage action gaming sensibilities. With its mechanical elegance, impeccable controls and intelligent structuring, it strikes the same vein as Shinobi 3D did – despite being a very different kind of action game – and hits its mark just as perfectly. Small aesthetic gripes aside, seeing (or playing!) speed runs of the stages means witnessing a thing of true beauty. The unforgiving difficulty makes sure it’s not for everyone, but those who appreciate bones-hard sidescrolling action owe it to themselves to check out this gem.