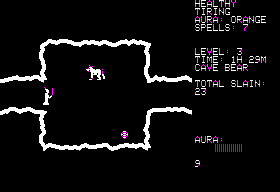 With the exception of Temple of Apshai, all games in the Dunjonquest series are rarities, but Sorcerer of Siva might be the most inaccessible of them all. Developed in 1981, it was the very last standalone release and besides the original TRS-80 version only ported to Apple II computers. The game was written and designed by Gene Rice, although Jon Freeman was still involved in creating the lore book/manual.

Once again an evil sorcerer needs slaying, but this time the villain has the reins in his hands, having trapped the player inside the Mines of Siva, a system of tunnels full of dangers and undiscovered treasures. In contrast with all other Dunjonquest games, Sorcerer of Siva puts players themselves in the shoes of a wizard. So for the first time they command an array of different spells, which not only replace the different attack variants used in the former games, but also fulfill special functions, like teleporting or locating stairways, which are necessary to get around in the mines. In addition to the familiar fatigue meter (which now uses descriptive attributes instead of the former percentual numbers) the hero now also maintains an aura, which represents the ability to cast further spells. It starts out purple, but changes colors with each subsequent spell use, until it turns red, at which point it is necessary to regenerate. As you control a physically weak wizard, fatigue is also much more critical than before. There is a spell refresh one’s stamina, but of course the effect is partially cancelled out by the weakening aura. One of the two is almost always at short supply.

Sorcerer of Siva takes a further step towards more action-oriented gameplay. Enemies spawn like crazy on almost all screens. At one point the evil sorcerer randomly appears and – unless he is quickly disposed of – casts a spell of forgetfullness that deletes one of the seven spells known by the player character. He is fairly easy to defeat, though, so the danger of losing spells is not too great. There are also rare items, the Touchstones, that can help the player character remember lost spells.

Though technically in a line with Datestones of Ryn and Morloc’s Tower, Sorcerer of Siva actually can’t be called a MicroQuest, anymore. The mines consist of six huge stories, with more than 300 screens total. Most stories at first seem linear, but after you first find yourself in a dead end, you’ll learn to value the teleport spell that opens up previously unknown parts of the mines.

The big problem with the huge extent of the dunjon lies in the unability to save the game, which Sorcerer of Sivashares with the much shorter episodes. To make things really frustrating, the corridors are full of trap doors that send you back to even below the starting position, no matter how far you’ve proceeded in the game. Those trap doors can’t be found with the search for traps command, making exhaustive trial&error and minute map making the only means to figure out the labyrinth. As if all that wasn’t enough frustration, the exit of the mines gets locked up after a certain amount of time, leaving players trapped in the mines, with their score presented at their death as the only solace.

There are eight difficulty settings that determine how many spells the protagonist has remembered at the beginning of the game and his starting position, as well as 10 settings for the duration of each turn. The game is more than hard enough with the lowest settings, though, so those options are only interesting for the most able.

The setting inside the mines brought Automated Simulations to try and give the dunjon a more organic look, as far as that is even possible on the TRS-80, with an effective resolution of 48×48 for the graphics window. (Technically, the TRS-80 used 128×48 pixels for graphics, but the DunjonQuest engine had them vertically scaled by factor 2, and of course a third of the screen was used for status information.) The Apple port does a better job at the new look, and for the first time features distinguished graphics for the different treasure types, making it possible to identify items (and decide whether they’re worth the hassle) before picking them up.

Sorcerer of Siva explores many new options for the series and plays out most distinctively among all DunjonQuest games. This distinctiveness is not for the better, though, as the new conditions make the game practically unbearable to finish.