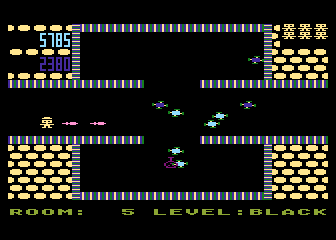 Synapse Software was only alive for a few years in the early-to-mid 1980s, but during their brief existence, they developed a reputation for publishing excellent software, primarily for Atari 8-bit computers. One of their hallmark games was Shamus, developed by Cathryn Mataga. While the title suggests something to do with investigative work (a “shamus” is slang for a detective), it’s actually a little misleading, considering it stars a knife-flinging robot in a hat and trench coat, infiltrating the lab of his evil counterpart, Shadow. The title screen features a rendition of the tune “Funeral March of a Marionette”, more widely known as the song that accompanied Alfred Hitchcock movies.

A reasonable number of games from this era were trying to be like popular arcade titles, while Synapse’s best entries took these concepts and expanded on them. In this case, Shamus is basically Stern Electronic’s Berzerk, but with a focus on exploration. In Berzerk, you controlled a little stick figure guy navigating around single screens, shooting hostile robots. When you cleared the area, you’d run to the exit, and then randomly be transported to some other screen, a cycle which continued until you ran out of lives. Shamus keeps the running and gunning aspect, but instead creates a persistent game world with a total of 128 rooms you can explore. There are colored locked doors that block your progress, which are opened up by finding the appropriately colored key. Each of the game’s four main levels are structured like simple mazes, requiring that you either carefully map out everything or memorize their layouts. Though the map design is set, the enemy locations and some items, like extra lives, are randomized when you enter or re-enter screens, while keys are semi-random, sometimes popping up in specific areas or across a predetermined set of rooms. 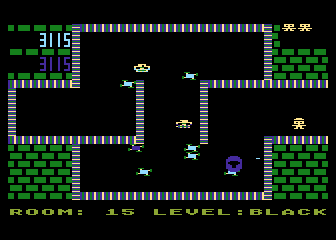 In spite of the open-ended structure, the game otherwise plays almost identically to Berzerk. Shamus attacks by tossing “Ion-Shivs”, which can only be fired when you’re holding a specific direction. You can shoot in eight ways, though the enemy fire is more versatile, and often aimed straight at you. If you dawdle too long, Shadow pops up just like Evil Otto to harass you, so you need to leave the room immediately as he can’t be killed. This is a little frustrating though, since it doesn’t give you a whole lot of time to sit and make a map.

Also like Berzerk, there’s a tiny horizontal line, one pixel in height, between the hero’s head and his hat, at least in the original Atari version. Bullets can pass directly through due to the way the hit detection works, though this is a daring move to try to pull off. Your shivs can cancel out enemy fire too, through due to their small size, it’s hard to make them collide. The walls are electrified with a pulsing glow glow (the effects vary depending on the computer), and touching them will spell instant death. There are different wallpapers in each room, and each area is coded with various background colors, which help prevent the game from getting too visually repetitive. With 128 screens total, it’s a fairly lengthy game, taking about an hour to complete a run if you know what you’re doing. But there’s also no save function nor any continues, so actually reaching the end requires quite a bit of time and skill. 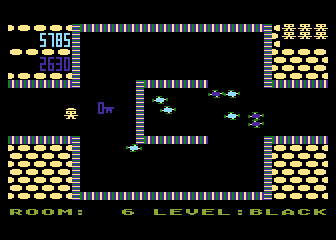 While it’s certainly a very lengthy and difficult game, it’s those features that are why Shamus is so beloved among 8-bit computer fans. There’s an astounding amount of content here for a game that’s a mere 16kb in size, with a massive world that just begs to be both explored and mastered. Even without the adventure elements, it’s certainly a very good Berzerk clone on its own right, and would’ve subsisted on that alone, but its ambitions, plus its interesting hero and scenario, that elevate it to a higher level. 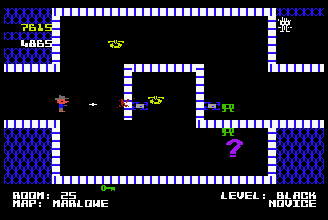 Shamus was born on Atari 8-bit platforms, and this should be considered the best version, but its popularity led to wide number of ports. The Commodore 64 version, programmed by Jack L. Thornton Jr., is the closest to the original version, though its not without its issues. The visuals are completely different, being a little bit more colorful, and with a slightly larger, redesigned hero. The shifting of the walls here doesn’t quite have the same effect, though. The movement isn’t quite as smooth either, and it generally just feels slightly shaky. However, the main map is slightly different, and there are four bonus maps here, each named after famous detectives and spies: Marlowe, Cluseau (a misspelling of Clouseau), Holmes, and Bond. Additionally, in the Atari version, the enemies progressively speed up as you entered new levels, while the speed is static in the Commodore 64 version. The Atari version has a rather simple ending screen before looping back to the first screen at a harder difficulty level, while the C64 version adds in a fairly long congratulatory message, written in cheek, pseudo-detective novel style. There is a homebrew patch called Shamus+, created by AtariAge user Slx, that integrates some of the changes from the C64 port back into the original Atari version, including all of the map sets.

The IBM PC version has the same sprite design as the Atari version, but since it runs in CGA, the color scheme is much uglier, and it’s completely missing the electrified wall effect. The sound effects are also only played on the scratchy PC speaker. For the most part, it plays well, except for one extremely nasty glitch when playing with the keyboard – the movement will sometimes “stick” after taking a shot, causing the hero to move a few steps, potentially right to their death. Playing with a joystick fixes this, thankfully.

The TRS-CoCo port looks slightly worse than the Atari version, with some really ugly background designs and plays quite a bit slower, but for the most part, it’s not a bad port. The TI99/4A port is more visually faithful in that regard, but the sprite sizes are smaller in comparison to every other version.

The Apple II version redesigns the hero to look more like a trench coat-wearing detective, with a larger sprite but losing the detail on the face. But the speed is extremely slow, and the entire game pauses every time you hit an enemy to play a sound effect, which makes for wretched pacing. The VIC-20 version is visually the simplest, which removes most of the backgrounds for pure black, and completely changes the look of the walls, so they’re thicker and look more like conveyor belts. Due to the changes to accommodate this, many screens have been redesigned, and most areas are more cramped. It’s also half the size of the Atari version (8k) and has only 32 screens. Amusingly, Shamus yells out “Ouch!” in a little speech balloon when gets fried.

In 2001, Telegames resurrected Shamus for a port to the Game Boy Color. This adds in some story scenes that explain the origin and rivalry between Shamus and Shadow. These actually feature some tiny, grainy video, though due to its choppy framerate, calling it “full motion” is somewhat overselling it. Each level is now themed – the first is a laboratory, the second is a movie studio, the third is a subway and the fourth is a casino – each introduced with a flyby of the area entrance.

Visually, this version is a weird mishmash. The view is zoomed in so only a portion of the room is shown at once, and it scrolls as you walk around, though it still flips when you change rooms. Shamus has been completely redrawn to be much taller, and resembles his design on the box artwork more than any other version. Some enemies have also been redrawn, but others appear to be identical to their Atari original, which makes for a stylistic clash. Due to the change in proportions, shooting enemies (and dodging their shots) is more difficult than before. The laboratory level has backgrounds like the original computer game, while the other stages are all new. The electrified walls look like lasers now, and despite being a more accurate representation of what they should be, they just aren’t as cool looking as the old Atari versions. There is a password option, though they’re only given out whenever you enter a new level.

It’s such a weird port. It’s cool someone decided to reach back into the past to resurrect something only old school Atari (and some Commodore) players knew about, but they didn’t really update much, and what they did change wasn’t really for the better. It didn’t need a massive reworking but some kind of modernization – like a map, or more weapons, or screen-clearing bombs, or at least an in-game soundtrack – would’ve gone a long way to make it feel a little less crusty.

The Mazes of Shamus

The Mazes of Shamus – IBM PC 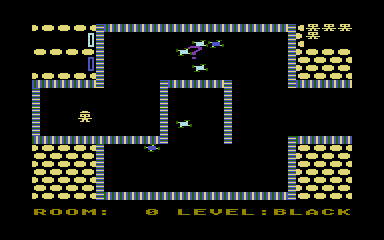 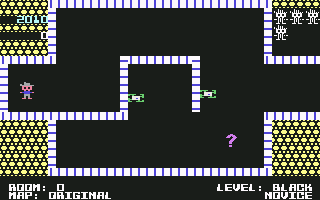 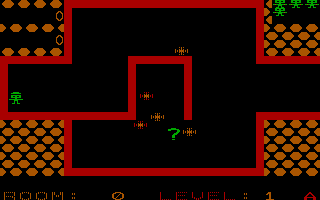 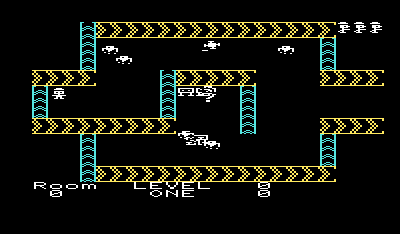 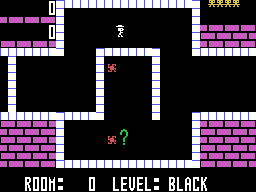 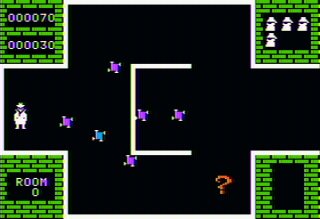