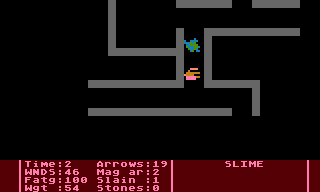 Chronologically the second game in the series, Datestones of Ryn functions as kind of a prequel to Temple to Apshai, as it shows an episode in the life of Brian Hammerhand as a young soldier, whereas he was depicted as a bedraggled veteran before. His unit has hunted down a band of thieves, who have stolen the valuable Datestones necessary for the calender of Ryn, up to the entrance of a cave. The lieutenant fears an ambush for his men in the dark, so he sends the lowest ranking soldier alone into the cave.

This time Hammerhand is the only available character, as there is no generation process in the game. The bandits have a secret getaway route inside the caves, thus their their impending escape by nightbreak has to be prevented. This limits Hammerhand’s quest to 20 minutes and makes the theme for this episode, Automated Simulations’ first MicroQuest. Sold at half the price of a regular game, this time there’s only one dunjon to explore, which is also significantly smaller than each of the four in the first game.

What initially sounds like a rip-off are Automated Simulations’ first awkward steps toward a pairing of RPGs with arcade games, that would eventually culminate in the advent of the action RPG genre: The game is conceived for competetive highscore hunting. The manual even recommends the game for tournament play, in fact the company already held a preview tournament prior to the game’s release at the 1979 Pacificon.

Inexcusable, however, seems the loss of room descriptions. When Epyx wanted to go and create an all-out arcadey feel, they might just as well have used random dunjons, or at least included a map editor. Coming from board- and war games, Jon Freeman of all people should have known about the power of customization and randomization. But maybe this was one of the things he couldn’t convince Connelley to be feasible in a computer game, a cause of grief for Freeman on more than one occasion. In an Interview on Crush, Crumble & Chomp! he remembered:

I had done some design work in the late ’60s for a war game featuring movie monsters, and I had proposed doing such a game at Automated Simulations first in late 1980 and again in early 1981, but my partner in ASI, Jim Connelley, didn’t think it could work. The third time I suggested it was shortly after the publication of the board game, The Creature that Ate Sheboygan, which convinced him that such a concept was both plausible and appealing. – Interview conducted by Cybergoth at The Epyx Shrine

Players start out with fixed stats and equipment which they have to use to their best ability to recover the Datestones, which are the most important criterion of scoring, but only if brought back to the exit of the cave in time. Slain brigands and beasts immediately bring extra points, but only the bandit leader’s head can outweigh a stone. It is important to weigh carefully between securing the stones at the exit and protruding deeper into the cave, as the time limit usually won’t allow two full-on raids. If the time runs out before Hammerhands return to the exit, the Datestones he is currently carrying are forfeit.

While a respectable attempt towards new frontiers, Datestones of Ryn appears as a not fully thought out concept. The game runs on the mostly unchanged Dunjonquest engine of the predecessor, whose reliance on stats and resource management loses most of its meaning when those parameters are fixed from the beginning. The appeal of time management in turn doesn’t come to its full potential because of the combat engine’s rather high random factor. The time limit is also set so tightly that the question when to return to the exit is really only raised once per game.

Once again the initial platforms were TRS-80 and Commodore PET, with an Apple version following soon, bundled with Morloc’s Tower and Starquest: Rescue at Rigel. The differences among these versions is the same as Temple of Apshai. Interesting proves the Atari port, which is inferior compared to the first game. The graphics are less refined, like on Apple computers the protagonist sprite is merely rotated for vertical directions. This divergence is caused by the fact that Datestones of Ryn was in fact released on Atari computers earlier than Apshai. Together with Rescue at Rigel and Invasion Orion, it was among the first games Automated Simulations ported to the system.

There is also a Commodore 64 disk image floating around the net, but it is very likely that it was inofficially converted from the PET, as it is completely identical safe for the font and standard colors. Apart from this probable bootleg, Datestones of Ryn marks the begin of a slow decline in ports. Not only a proper Commodore 64 port is missing, but also the VIC-20 and IBM-PC platforms are neglected. Given that those conversions were among the latest for Temple of Apshai, this may have to do with Epyx discontinuing the series. 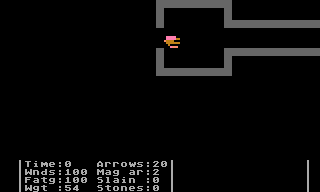 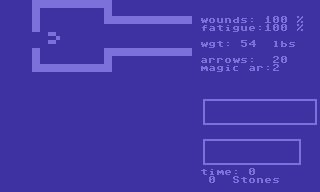 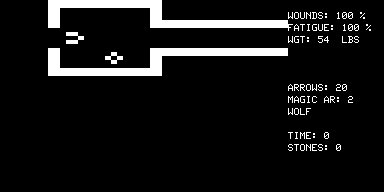