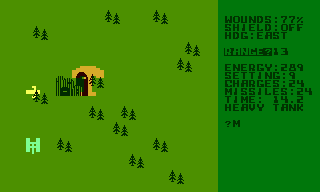 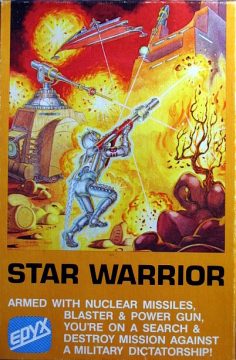 Star Warrior, the second StarQuest game, departed from the established formula more than any other entry before. Instead of claustrophobic hallways and rooms it took the action to open terrain. (It came before the Upper Reaches of Apshai expansion, whose outdoor environments also felt more like dunjons with an unconventional color pattern.) It also differs from a storytelling perspective. Instead of building upon an established character from the previous game, it introduces Purvis Youngblood, member of the mercenary organization The Furies. They’re no ordinary guns for hire, though, as they call themselves “agents of retribution”. Now they’re hired for a querilla operation to free planet Fornax, formerly an independent human colony but now annexed by the Stellar Union.

The player can take part in this war in one of two possible tasks. The target in scenario is it to cause as much wanton destruction as possible while proceeding to the far north. This is meant as a maneuver to distract from the actual target in Scenario 2, the military commander in control of the occupation. 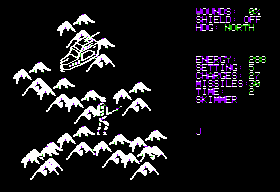 At the beginning of each scenario comes the choice between three combat suits, which differ in attack strength, shield power, special options and the like. Disk versions (as opposed to those released on tape) also allowed to create custom suits. The options on the battlefield are actually more resembling a war game, although there is but one character to control. Most importantly, each suit comes with a jetpack, as walking by foot quickly becomes tedious with the new world scale. Different kinds of terrain like swamp and plains are not just for show, as they influence movement speed. Trees, mountains and other obstacles are even taken into account in simulating true line-of-sight. 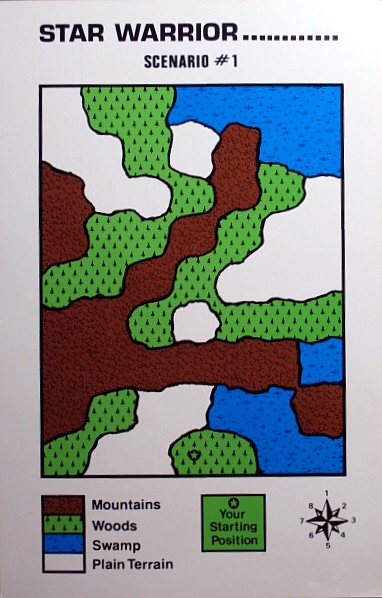 In accordance with the setting, enemies are now mostly tanks, infantry appears in bigger units. Not only the enemies but also the player can move in 8 directions now. Besides moving targets, the destruction of several immobile structures greatly raise your score. Most of them don’t fire back, but they’re much more sturdy than the war machines, and require multiple rockets to tear them down.

Those rockets are among the more strategic simulation-like of your suit’s powers, as you have to chose direction and range manually when firing. Also more tactical in nature are decoys and the suit repair function to reinstate damaged systems. The power gun and force shields from Rescue at Rigel are back, too.

For the first time the original TRS-80 game was blessed with “real” graphics. The Apple II version is extremely zoomed in with a huge sprite for the player character, but it is always to the upper right, which is very irritating. The best overview offers the Atari version, but it reacts very slowly. Combined with a seemingly infinite input buffer, all but the most patient players will probably have typed the input for half of the game before even the first move is executed. (There supposedly was also a port to the Commodore VIC-20, but that couldn’t be acquired for this article, either).

Star Warrior is one of those games whose main problem is that they don’t manage to figure out what kind of game they actually want to be. For an RPG the area is much too monotonous and boring, for a strategic war game it is much to limited with only one player-controlled unit, and the turn based DunjonQuest engine doesn’t lend itself to action games at all. Trying to offer a little of everything, in its released state, it succeeds at neither. Back to the drawing board, Mr. Connelley! (is what they should have told him 30 years ago.) 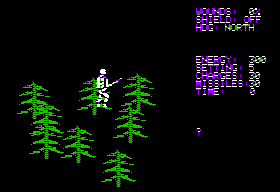 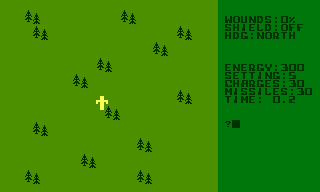 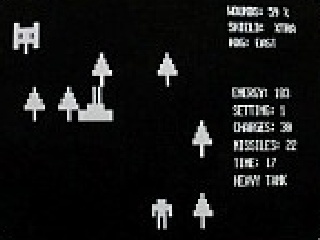