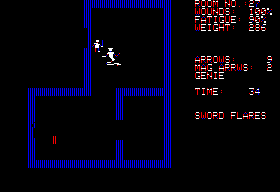 Once again it’s time to act for Brian Hammerhand. Coming to a small town called Hagedorn during his travels, he learns that its citizens are terrorized by a mad wizard, fittingly named Morloc the Mad. Before he can say dunjon crawl, he gets hired by the local elders to put an end to Morloc’s rampage. Great peril awaits him in the wizard’s tower, for Morloc has dabbled in demonology, and the halls are swarmed with evil creatures. But that is not all, Morloc himself is known almost impossible to capture, as his magic makes him a master of getaways.

Morloc’s Tower is a MicroQuest like Datestones of Ryn, but it features several interesting alterations to the formula that make it more worthwhile despite the small scope. The tower consists of six stories, which can all be accessed by one staircase, each being no larger than one single screen. While this makes navigation much easier than ever before, the task to find and kill the wizard is the most complex in any Dunjonquest so far. Unlike Datestones of Ryn, all the rooms have numbers like in the big Dunjonquest games, but there are no descriptions for them in the manual. Maybe descriptions were planned, but in the end got cut for whatever reason. The only room numbers listed are those that contain the staircase, as in the game there is no visual representation of it whatsoever.

For the first time a computer RPG was mixed with adventure elements, which always had been a staple in the better P&P adventures. The treasures found in the tower are more than just stock loot or weapons. Many of them are unique items that can be used through a new special command, and some are required in the correct situation to solve the quest. Some have an immediate effect on your character, like a ring that regenerates health over time, while others are just red herrings that encumber the hero with unneeded ballast. After locating Morloc, players have to find a way to keep him from escaping to other rooms in the tower, which is impossible without using the right items. Not confident all of their customers would adapt to this novel kind of problem solving, Automated Simulations provided hints in multiple degrees of concreteness, up to a complete solution printed headfirst in a tiny font at the end of the manual. This precaution might have been for the better, as the requirements to solve the “puzzles” are very cryptic, typically for early RPG games (compare the early Ultima episodes or even later console games like Zelda 2 or Castlevania 2). The game gives no information at all about the nature of found items, and only few can be guessed through observation, like a magical sword that starts glowing in certain situations.

Like in the first MicroQuest, you’re stuck with Brian Hammerhand as a premade character. This time you don’t even get to see his base attributes, there’s just a screen introducing his starting equipment. The dunjon layout is also fixed as always, but the game takes random elements just a little bit further than its predecessors. Treasures appear at different locations and even seemingly fixed enemies might not appear all the time. Morloc himself freely moves around inside the tower until you stop him. There’s no hard time limit in this episode, but time factors importantly into the score rating in the end.

Morloc’s Tower is also the first Dunjonquest game that allows to choose between three difficulty levels that affect the number of magical arrows, potions, monster strength, etc. The lowest setting is easier than your average episode in the series, especially after finding the ring for health regeneration. The harder settings are more of a challenge, though.

Once again the characteristics of most ports remain the same, with the exception of the version for Atari computers. Morloc’s Tower is the aesthetically worst of the Dunjonquest ports for the system, with pseudo-monochrome graphics and missing footstep sounds (but with very annoying door noises). It is also either programmed in a way that no emulator can run it properly, or the only known preserved dump of the game in this version is broken. 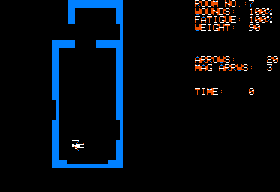 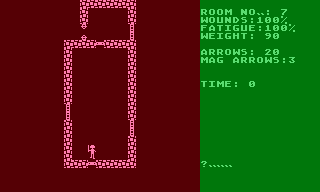 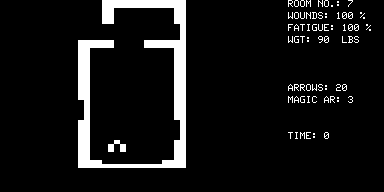