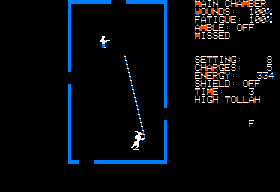 Fantasy role playing is great and all, but after a while it can grow monotonous. This was apparently what Connelley and Freeman were thinking when they made Rescue at Rigel in between the third and fourth DunjonQuest. The first game in a new science-fiction offshoot to their popular series, Rigel was introduced under the label StarQuest. (Incidentally, Space Crusade, the Warhammer 40,000 equivalent to Milton Bradley’s Hero Quest, was also called Star Quest in some regions.)

Based on the same game system (on the TRS-80, there’s no telling apart the game from DunjonQuest by the graphics alone), StarQuest ties in with yet another Automated Simulations franchise, as it takes place in the same universe as their early Orion games. The hero is Sudden Smith, who already served as the protagonist in the flavor material to those two strategic war games. Sudden himself is of course a nod towards classic space heroes like Flash Gordon and Buck Rogers, which the game is officially dedicated to, next to dozens of other SF characters, from Lazarus Long to Han Solo. 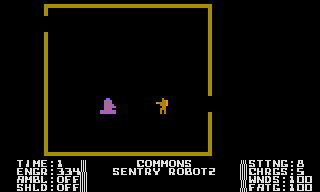 In this game he is not yet a space fleet admiral, but sent as an operative to rescue 10 human prisoners who have been captured by an ant-like alien race called the Tollah (in another Warhammer parallelism, it just takes the main enemies of Temple of Apshai into space), after a renegade leader of them defected to the Stellar Union. Sudden Smith has only one hour left to find them and prevent the horrible experiments that they are about to endure.

The alien base hidden in an asteroid orbiting the planet Rigel consists of six floors with approximately 60 rooms. While movement is mostly the same as in DunjonQuest, getting around inside of the station is a bit more difficult. There are two lifts, each of which either goes only down or only up. But not all floors can be accessed by them – large portions of the space station are only connected with teleporter fields. Those unfortunately look exactly like doors, only after going through they reveal their true nature. Add the fact that many floors use almost the same layout, and you know you’re in for a cartographer’s job, or else you’ll get hopelessly lost. But be sure to use a pencil to note down those prisoner locations, for they change with each new game. The room descriptions are back, but here each room refers to a type like “lab”, “dropshaft” or “sanctum”, with an explanation as towards their general purpose on the station or in Tollah culture, rather than individual observations.

The special commands have of course been adapted for the new setting, especially combat is much more focused on ranged attacks. You have your standard laser gun, which, other than the bow in the fantasy counterpart, doesn’t need a straight line to hit enemies. For tougher enemies, there is also a special blaster gun that can be set between 9 charge levels. In case of an ammunition shortage, Sudden Smith can also attack with what looks like a flying Karate kick, but it is clearly of secondary nature here, as many foes attack from a distance themselves.

Upon finding each of the hostages, Smith has to beam them out of the complex with his transporter, which also serves as his only way out after he accomplishes his mission. The device, however, uses the same energy units as his laser gun, and if he doesn’t take care, he might find himself stuck on the station until the very end (which is after 1 hour in real time or whenever he dies). Also dependent on this energy is a shield, which of course protects from laser damage. 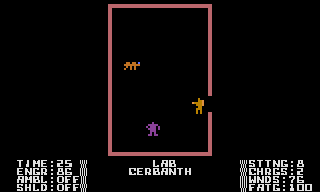 The most interesting of agent Smith’s gadgets is the AMBLE (short for “accelerated movement through bio-electronic enhancement”) system, which works like steroids do in so many other games. Whith the AMBLE system activated, the player gets two moves in each round, also dealing more damage with melee attacks. The AMBLE system doesn’t draw from energy reserves, but it causes rapid fatigue, so careless space adventurers can quickly find themselves immobile between an alien’s mandibles.

The versions for the TRS-80, PET and Apple II are uniform with their DunjonQuest counterparts for these systems. On the Atari platforms Rescue of Rigel uses the same engine variant as Datestones of Ryn, with the 90-degrees rotated main character. On the VIC-20 the game uses a weird aspect ratio for the graphics, wich makes them look warped, with a tiny main character that seems almost comical. On the other hand it scores with musical cues and more versatile sound effects than any other version. Despite a weird color palette, the IBM-PC version is the winner in the graphics department, thanks to huge, well defined alien sprites. It has to be throttled way down on modern machines, of course, even in DOSBox.

With the forgoing of character stat development and concentration on one single quest, Rescue at Rigel is close to MicroQuest standard, although it is significantly bigger than Morloc’s Tower, thus filling in kind of an in-between space like Sorcerer of Siva, luckily without the more frustrating elements of that game. The task of course is once again very simple, and also a bit on the easy side, despite the three difficulty levels to chose from. In best DunjonQuest tradition, the display of your score in the end has to suffice as a reward, further nourishing the hybrid board/arcade game spirit. 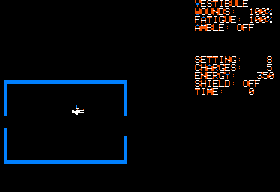 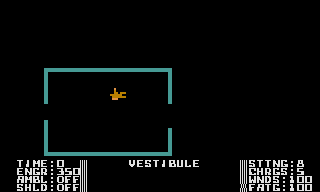 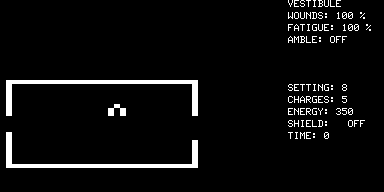 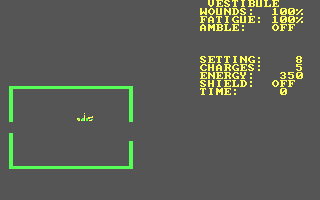 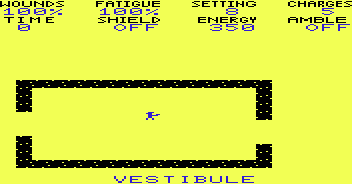