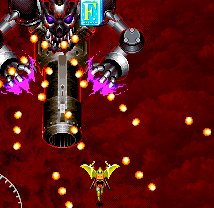 Sorcer Striker was followed up by Shippu Mahou Daisakusen: Kingdom Grand Prix. It’s one of the most original genre-blending games ever made – a hybrid of a racing game and a shoot-em-up. 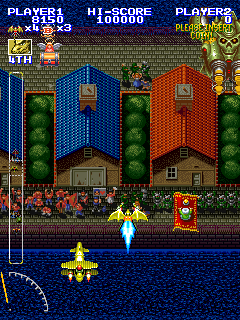 The storyline tries to justify the strange genre-mix by stating that after years of war, the kingdom wants to end the violence by holding a race. New characters include Honest John, a steam powered robot; two kids that can drive a fighter jet named Kickle and Laycle; Nirvana, the queen of the fairies; and Bul-Gin, the goblin king who wants to return his race to his former glory. Returning are Gain the warrior, Chitta the witch, Miyomoto the ninja dragon, and Bornam the necromancer. This brings the total of eight playable characters. The English version has some comically translated text, including the intro enthusiastically stating that “Chicken is no need!”

The closest comparison to Kingdom Grand Prix is probably Irem’s Armed Police Unit Gallop. Like in Gallop, you move faster by getting closer to the top end of the screen. You can also give yourself a short speed boost by holding down the fire button, although doing so will temporarily leave you defenseless. You can bump into walls and even enemies without dying, though bullets will still kill you, of course, which will slow you down. The main difference is that the level is full of other racers. They cannot be directly attacked with your shots, but they can be rammed into the scenery or enemy fire, or slowed down with bombs. 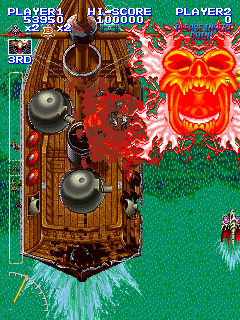 After completing the first race, you have the option to choose between two and sometimes three courses. Depending on what rank you come in at the end of the level, you’ll receive an appropriate number of points, much like any traditional racing game. If you manage to place first by the end, a second loop is unlocked using the levels that were not used on the first run.

You play through six races in a single loop, although there are twelve levels altogether. Some of the stages are fairly creative, like the vampire castle, the arctic corridors and the sewer, where the course alternates between above-water and below-water segments. The bosses show up near the end of levels, but there’s usually a small stretch of regular enemies afterwards, giving you a quick chance to try and catch up to a rival before crossing the finish line. The difficulty has been toned down from the first game, but the bosses are still mighty impressive. One of the most outstanding is a horrific monster with the heads of a demon, a baby, and an owl that attacks with its tongue. 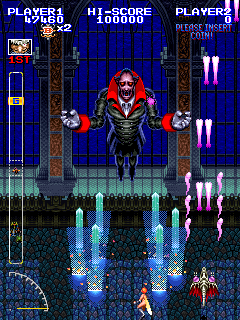 The power-up system is essentially identical to its predecessor, though there are only two secondary shots (homing and forward) rather than three. There’s not much of a scoring system besides shooting and dodging, since the goal is to place as highly as you can at the end of the race.

There’s no doubt that Kingdom Grand Prix tries to be innovative, but that still doesn’t prevent the fact that the racing elements don’t entirely make sense. As you get further and further in the game, your top speed is lowered, so it doesn’t feel much like you’re racing. And once an opponent has passed you, it’s incredibly hard to catch up, since you don’t always have a lot of control over your top speed. Furthermore, it’s incredibly unfair that most opponents can speed right past boss fights. Every once in awhile, they’ll get stuck on the same screen and get destroyed temporarily, but it feels like the rules of the game only apply to the human players, and no one else. However, there are a few things you can take advantage of, like the fact that rivals cannot drop bombs. There’s no shame in dropping one at the beginning of a race in order to gain a head start. 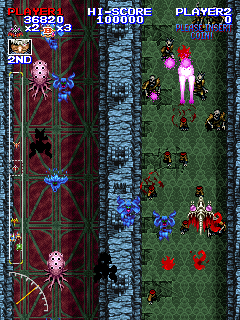 The graphics utilize a similar style to Sorcer Striker, to the point where many of the levels use the same themes, but the sound is a huge improvement. The music is almost always frantic, the level two theme sticking out as one of the catchier songs. The soundtrack was composed by the irrepressible duo of Hitoshi Sakimoto and Masaharu Iwata. While mostly known for their orchestral scores in Final Fantasy Tactics and Radiant Silvergun, they still manage to pull off some fantastic music using FM synth thanks to Sakimoto’s Terpsichorean sound driver. One of the boss themes sounds right out of Vagrant Story, Sakimoto’s later PS1 RPG, complete with  the same chanting samples. 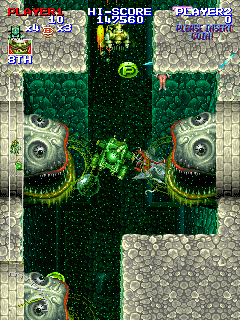 While some of the racing elements are clumsy – a better way to accelerate would’ve been nice – it’s still a must play Thankfully, it received a Saturn port, though it was only released in Japan. It’s quite faithful, complete with a tate option (dubbed “Saturn Mode”). Upon inputting a code, you can enable a mode to turn off the racing aspect, allowing you to play the game like a typical shooter. Since there are no rivals and no ability to accelerate, the game’s default scrolling speed is a little slower than normal, and stages end right after defeating a boss. Even when removing the primary gimmick, it’s still a quality title. 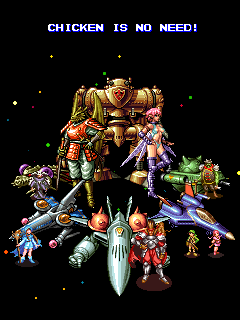 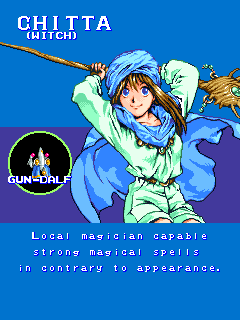 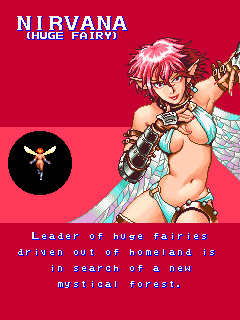 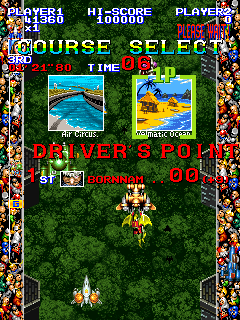