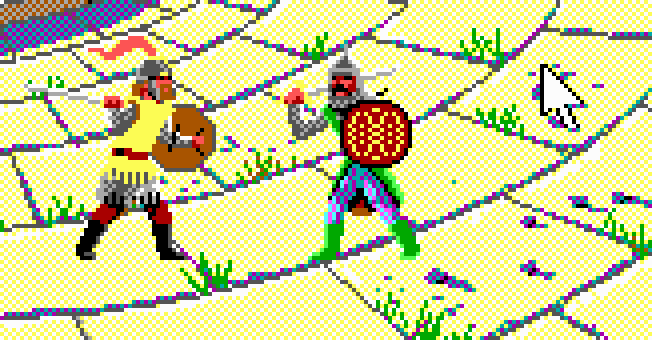 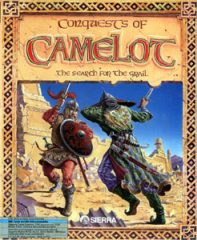 Sierra’s short-lived Conquests series – written and designed by Christy Marx, with artwork provided by her husband Peter Ledger – is fairly unique amongst its field. As compared to other adventure games, like Sierra’s own King’s Quest, which is basically a mish-mash of medieval lore, mythology and fairy tales, the Conquests series strives for more faithful, scholarly retellings of these stories. The back of the box for Conquests of Camelot tells it pretty well:

“Sadly, in the last half of the century, the Arthur legend has been recast as a cartoon and children’s story. The mystic rituals and dark passions that colored the original Arthurian legends have been watered down to the soft and toothless fairy tales most commonly seen today.”

That actually sounds a little bitter. You can picture the developers scribbling that with rage as they curse of existence of Disney’s The Sword in the Stone or Monty Python and the Holy Grail.

At any rate, the legends of King Arthur and Robin Hood are just that – legends. It’s impossible to be completely historically accurate, because most, if not all, of their exploits are regarded as fictional, and often have several different variations anyway. However, it does try its hardest to accurately portray the era of the legend, featuring realistic geography and an entirely believable background. For instance, in the era of Conquests of Camelot, Christianity is portrayed as something of a competing religion against other deities, like the old Greek gods. That’s not really something that’s brought up in most modern mainstream Grail Legend literature.

It obviously doesn’t go back far enough to use actual Olde English, but its writing is a bit more eloquent than usual, utilizing a medieval style of early modern English without getting silly like the old Dragon Warrior NES translations, which simply replaced “I” and “You”, with “Thy” and “Thou”. Sometimes they use old-style spellings of the names – like Gwenhyver instead of Guinevere, or Launcelot instead of Lancelot.

There are only two games in the Conquests series, each starring a different British folk hero: Conquests of Camelot, focusing on King Arthur and his search for the Holy Grail; and Conquests of the Longbow, focusing on Robin Hood and his bandits’ war with Prince John and the Sheriff of Nottingham. Perhaps not coincidentally, both were released roughly around the time as major motion pictures dealing with similar themes: Indiana Jones and the Last Crusade in 1989, which also focused on the search for the grail, and Robin Hood: Prince of Thieves in 1991.

Conquests of Camelot is one of the last games to use Sierra’s SCI0 interpreter. It utilizes 16 color EGA graphics and supports sound cards, and uses a text parser. You can also control your character with a mouse, and can look at any item by right clicking it. The story begins with the kingdom of Britain in peril. The knight Launcelot is madly in love with Queen Gwenhyver, who in turn is loved by King Arthur. This tragic love triangle has brought a pestilence to the land, and the populace is suffering. The solution, says Merlin the Wizard (who also acts as the game’s narrator) is to find the Holy Grail. A few of the knights – Gawain, Launcelot and Galahad – take off to find it, and fail to return, so King Arthur sets off himself to do the task right.

During the course of your adventures, you’ll find three of your missing knights. It’s up to you if you want to save them, and the game will progress if you decide to leave them to die. Of course, you’ll lose points, and the grail will actually kill you once you find it, since you’ve been judged unworthy by its holy grace. You’re actually scored in three different areas – Skill (for fighting), Wisdom (for solving puzzles), and Soul (for helping people out).

Conquests of Camelot isn’t quite focused on puzzles, at least in the traditional sense. Most of the game is spent figuring out riddles or fighting through arcade sequences, and any time where you actually need to find and use an item to proceed, it’s usually pretty clear. In the end, though, this makes the adventure way more frustrating. 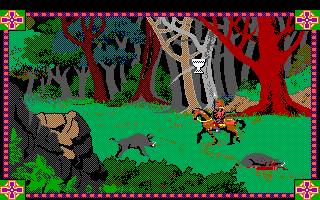 Once you leave Camelot (which you can strangely never re-enter), you’re presented with a map of Ye Olde England and a dozen or so locations. This is mostly a sham, though, because most of them just pop up with messages basically saying “The grail sure isn’t here!” The first place you need to visit is Glastonbury Tor, where a mad monk is supposedly hiding it. Your first encounter is against a pack of boars, before challenging the Black Knight to a jousting duel. Neither is technically very difficult, but both require that you learn a single trick to beat them, which can usually take several tries. When facing off against the boars, you just need to time your spear thrusts correctly, but there’s no consistency and you’ll often find yourself getting killed for seemingly no reason.

Once you rescue Gawain, you’ll end up having to solve a series of riddles posed by a group of stones. These are quite difficult, if these types of riddles aren’t your thing. (Q: “If you break me I do not stop working, If you touch me I may be snared, If you lose me Nothing will matter. What am I?” A: “Heart”.) Upon conquering these, you’ll have to draw your sword for a battle with the mad monk, and it’s pretty clear the SCI engine was never made for action sequences.

After learning that the mad monk was indeed mad and obviously doesn’t have the grail, you’ll travel to snow-laden Ot Moor. Here, you need to cross a frozen lake, with the help of a magical heart you found at Glastonbury Tor. This is one of those many obnoxious sequences where you need to move step-by-step through what amounts to an invisible maze. Wander a few pixels off the path, and the ice will begin to crack. Move a few more pixels, and you’ll fall to a frozen death. There’s very little room for error, and it goes on for a few screens, officially making it even worse than the tentacle monster maze from Space Quest II. Once you reach the center of the lake, you’ll find Launcelot frozen captive by an ice queen. To save him, you need to answer a series of questions involving flowers, which is easily solved via the documentation in the manual.

You eventually learn that the grail is actually in Gaza, so you set sail to the Middle East. Once in Jerusalem, you need to walk around the bazaar, talk to the people, and solve their problems to continue, which is very straightforward. Before you find the grail and explore the underground catacombs, you’ll need to answer some more questions, which, again, are easily solved by reading the manual. And since most of the questions amount to reading comprehension, you end up learning quite a bit about Greeks gods and goddesses in the process, even if you didn’t mean to.

It’s a pretty fascinating, well-written adventure, and while some segments are extremely aggravating, they’re towards the beginning of the game, and the later half is a bit easier. Still, if there’s any major issue, is that it’s all a bit too dry. It’s one thing to tell stories from a historical angle, but all too often, it ventures into textbook territory, and is missing a lot of the personality that makes adventure games so fun. The only humor comes from the traditional Sierra-style death sequences, which almost feel hilariously out of place. If you try to leave Camelot and forget to pray to the gods (and give them cash), the castle gate will come crashing on top of you, killing you before your adventure can even begin. And, when you finally find the grail, a thief steals it. If you stand still and let him get away, Merlin chides you and sarcastically suggests that you may as well fall on your sword. Arthur then takes his sword and proceeds to commit suicide. That’s… really over the top, there. 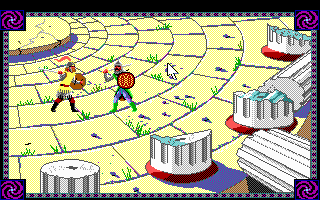 In spite of its problems – and there are a lot of them – Conquests of Camelot still somehow ends up succeeding in spite of itself. You just need the patience of the gods to enjoy it properly.