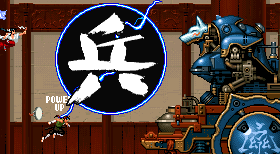 Sengoku Ace proved to be popular enough in the arcades to warrant a fairly big sequel. While Sengoku Ace exuded a lot of charm and character, it was ultimately a standard shoot-em-up affair. Sengoku Blade, on the other hand, is a complete breakout with much more complexity and is a large departure from the Sonic Wings formula.

Once again, Sengoku Blade boasts a roster of colorful characters. Things are a bit different this time, though. Instead of the cast of characters piloting various planes, here they instead fly about the screen all by themselves and call upon familiars to enhance their attacks. 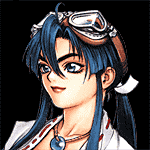 Koyori’s back, having transformed from spunky, tomboyish shrine maiden into one of the most blatant examples of fanservice ever seen in a non-hentai shoot-em-up. She still fires ofuda at her enemies, but this time calls upon a strange monkey creature made of water to launch homing bubbles at her enemies. When her shot is charged, the monkey will release a small, slow-moving projectile with varying potency. Her bomb attack creates a huge sphere of electricity with symbols appearing inside it in a rapid sequence. 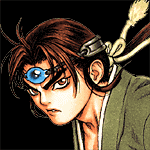 A young ninja who is in love with the game’s kidnapped princess plot device. Sho rapidly throws blades directly forward and his familiar is a pair of magic mirrors with the image of his beloved in them. When charged, the mirrors will stay in place wherever the button was released and fire beams forward continually for a few seconds. For his bomb attack, he sends a massive hail of giant swords at his enemies. 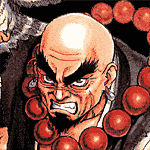 Made to be the main character in the English version (because, ya’know, Americans like manliness), Tengai is now really angry-looking and brutish. He fires Shinto beads at his enemies and calls on the support of a hawk as his familiar. When charged, it becomes a phoenix and lunges forward. The side of the phoenix depends on Tengai’s power level. His extremely effective bomb attack sends huge, glowing kanji streaming forward for a few seconds. 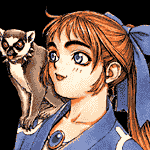 A spunky young kunoichi with a pet lemur named Socrates. Junis is similar to Sho, but she throws kunai and shuriken in a three-way spread. Unfortunately, the spread gives her some really big blind spots and it’s nearly impossible to focus your attack power on a single target long enough to kill it. Her charge attack calls upon Socrates, who breathes flames directly forward. Her bomb attack is a cinematic cherry blossom storm that showcases her preening for the audience. 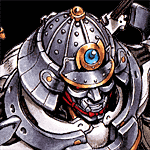 A robot samurai who moves very slowly but is incredibly powerful. Katana shoots very small and ineffective lasers. Fortunately, his familiar is a magical spear that multiplies with his power level, creating an effect similar to Options in Gradius. When charged, the spears can be thrown forward with a very short range, but an immense amount of damage, usually killing anything it touches that isn’t at least a mid-boss. His bomb is a screen-filling lightning. Not related to the other robot samurai named Hagane. 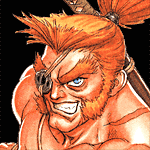 Yup, he’s back, but as a secret character this time. Although his main weapons are his arrows, his familiar is a floating sword that shoots energy waves. His special attack shoots out an enlarged projection across the screen.

The characters are much more distinctive this time around, as the introduction of the familiars changes the game up a whole lot. Your familiars power up as you do, either multiplying or becoming more powerful. The familiar charge attacks add a much-needed critical strike as the bombs just aren’t frequent enough to waste every time a major enemy shows up, and this is especially crucial here as the enemies in this game take quite a few bullets before going down.

Aside from the most obvious change (that being that the game is now a horizontal shooter), the game is much harder and requires a lot more skill. As mentioned, enemies are much stronger, but moreover, the bullet patterns are much more complicated. There are many instances where you’re just going to have to use a bomb or you’re going to die. Luckily, the game designers attempted to balance this out by being a bit more forgiving with hit-detection. Now, your characters can suffer two types of hits: bullet hits and physical hits. Bullet hits will kill you instantly and bring you back to your initial power level. Physical hits (i.e. physical contact with an enemy) will merely stun you for a second and bring your power down one level.

While fans of the tate-shooter layout might cry foul, the perspective allows for some aesthetic benefits. For one, the game has some pretty marvelous parallax scrolling in its backgrounds. The stage progression is also pretty dynamic, sometimes completely changing its motif several times before you reach the boss. Likewise, the huge bosses tend to transform several times with some really cool morphing sequences. The visuals are much more colorful, and much more varied, than most of Psikyo’s other shooters. All around, the game is just really good looking. On the other hand, while the music sounds much more traditional, it just doesn’t seem as good as the soundtrack in the first game.

Much like the first game, the opening stages are randomly selected, but it starts following a set pattern from the fourth stage. Here, you meet all of the random mini-bosses you’ve faced throughout the stages, each of whom taunts you before the fight. There’s even a branching path in the final stages, leading you through two different sets of levels, and a bad ending if you don’t kill the final boss in time. Also, unlike a lot of arcade shooters, you can’t simply credit feed to the end – starting at the fourth stage, continuing will bring you back to the beginning of the stage.

Sengoku Blade was ported to the Saturn and released as a two-disc double set, including both the game disc and a fan disc. The fan disc includes official artwork, “guest” artwork from a bunch of notable illustrators, and several hundred pieces of fan art from a contest. Most of it isn’t good, of course, but there sure is a lot of it! There’s also a “Samurai Fortune” selection, which is a brief, weird cutscene starring Ayin. The actual game is a pretty faithful conversion, with the addition of voices during the brief cutscenes, and the ability to play as Marion from Gunbird after beating the game with all characters. It also includes a rapid fire button – very handy! The Saturn version is a bit pricey on the aftermarket. The PlayStation 2 release is just a straight port of the arcade version, so it’s missing the bonuses from the Saturn version except for the rapid fire, plus the visuals are interlaced. However, it is much cheaper and easier to obtain. The Japanese release contains both Sengoku Ace and Sengoku Blade, but the games were released separately in Europe. Korea not only got another PC release, but also a mobile phone port by Blue Bean Soft in 2006.