Released four years later, Costume Quest 2 switched the lead to Gabe Miller, one of the designers on the first game, and revamped its base mechanics significantly. It also tossed out the Halloween vibe for New Orleans blues and cyberpunk. Yes, really. Upon returning to Earth by simply just going through the first portal they found (though now back on Halloween night because of time dilation or whatever), the twins are surprised to find their dentist, Oral White, making a deal with a time wizard. Suddenly, White rules the entire world and has outlawed Halloween and candy, creating a dentally healthy dystopia that the twins have to take down with their own time travel tricks. 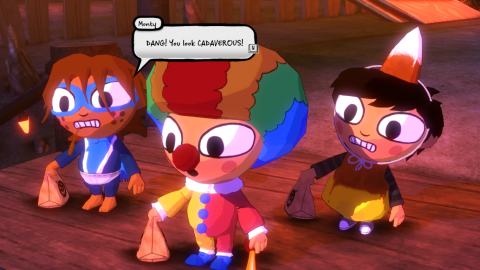 Costume Quest 2‘s narrative is shockingly good. While the first Costume Quest kept things simple, its sequel builds up some theme work and creates a layered, entertaining villain. White makes his presence known through the entirety of the future segment of the game through statures and propaganda, and the few scenes he has in person make him out to be a hammy yet threatening person. You even get to learn of his origins while exploring the swamps in the past, and the game ends with an expected but effective little twist. The end result is a game that hits the sweet spot between a more involved experience and a kid friendly good time, backed by a much more involving battle system and a switch from the easily abused battle stamps to creepy cards. 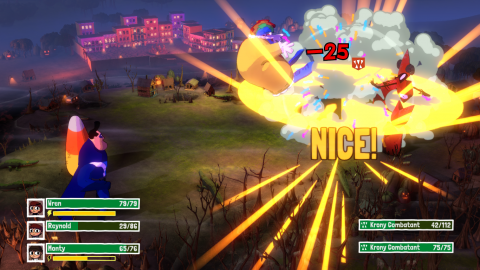 In the previous game, creepy cards were just a thing to collect for completionist sake, but now they have completely replaced battle stamps. Instead of equipping them, you can pick three to make a hand, and can then use those cards in battle to assist you. The cards also don’t get used up, but have to recharge for a few fights after use. There’s a ton to find with a lot of different abilities, including reflecting damage back on enemies, giving your whole party splash damage in their base attacks, and some basic healing. The game still leans a bit too much on the easy side of things, though, so there’s rarely a moment where you feel like experimenting with them can have some unexpected pay offs. However, some of these cards, like a full heal after battle, remain incredibly useful anyways. 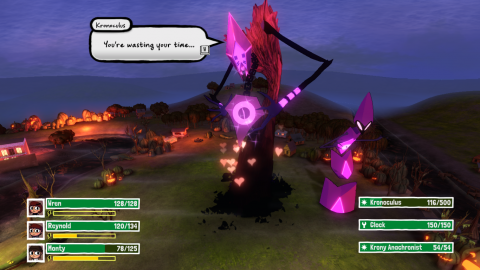 Actual combat feels way more involving this time around. The original game tried stretching combat to four different buttons, with a random one being selected to press to do an attack properly or defend against a move. This game simplifies it to three, each designated to a different party member. To make things tricky is that every costume attack has radically different timing to feel out, along with a wider range of attacks from enemies. As you go on and level up, you can also learn new abilities that grant you an extra hit with a well placed attack, a counter move that carries a lot of risk, and improved meter build. Unlike the last game, specials rely on meter instead of a simple set charge time, and they build with good hits and taking damage. This completely throws the rhythm of battle off and creates a more chaotic, involving mood. On top of all of this, there are now enemy and attack types of monster, machine, and magic, creating a Pokemon style weakness loop. The only problem with it is that there’s only two costumes that get bonuses against tech enemies, but they’re both so fun that it doesn’t matter too much. 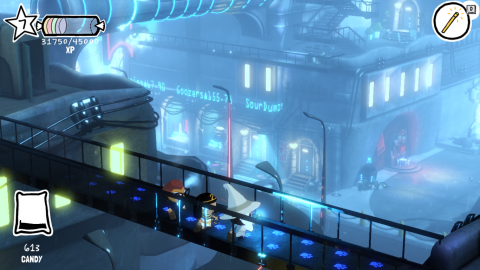 The new costumes are also a load of fun, especially Thomas Jefferson and the creepy/hilarious clown. These new outfits have wildly more inventive field powers, like Jefferson allowing you to make deals with NPCs, or the clown having an annoying bike horn with more uses than you’d ever think it would. Also, it’s just good fun to run up to every single NPC in the game and honk that thing endlessly at them. While the exploration areas get a bit too heavy on costume switching to make progress, especially in Dystopia Downtown, the extra layer there makes them feel a tad more alive. There’s also many more maps to explore, all with their own style and look to them. 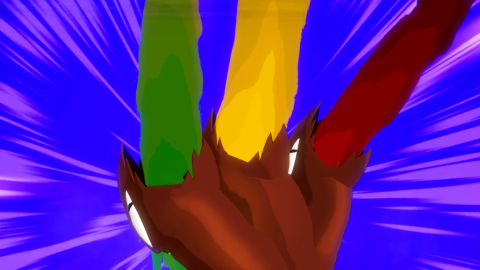 What’s really surprising is that the game is roughly the same length as the last, about eight hours, yet throws in so much. The secret is making areas smaller and denser. There were a lot of dead air or repetitive sections in the maps of the first game, something this sequel has no problem with. It also uses these maps more for narrative, like having history explaining statues in some areas of the dystopia, the specialized buildings in the compound, and just having a section of the swamps populated by tourists and street performers. The world is just more varied and interesting now, ditching the limiting suburbia trappings for more lively concepts. 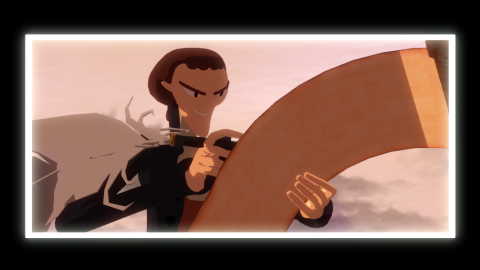 The game still retains the beginner friendly nature of the first, with a ton of water fountains around to regain health and saving whenever you do anything of significance, but it challenges a tad more in smaller ways, while adding a generally smoother experience. It keeps what works about the first game, and improves on it in every way, even down to just small things like button input. The only issues beyond some nitpicking comes from wanting more of just about everything, but for a short download release, Costume Quest 2 just about goes above and beyond the call in every way.

Honestly, the bike horn alone makes it worth a play. You can freestyle it with a New Orleans jazz band, making this game, scientifically, the greatest game ever made.