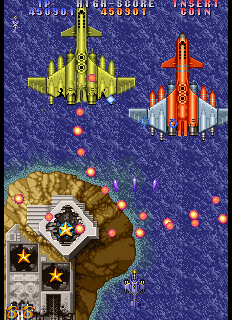 Takumi, one of the four companies that formed after Toaplan closed its doors, finished Twin Cobra II. It was almost completed when Toaplan went out of business, so Taito, the company that owned the rights to the Tiger-Heli series, was nice enough to let the former Toaplan employees finish it up. Even though it was technically published by a different company. it has just as much of the Toaplan spirit running through it as any other game in their library. The levels are long, the bosses are menacing, and the music is loud and catchy. 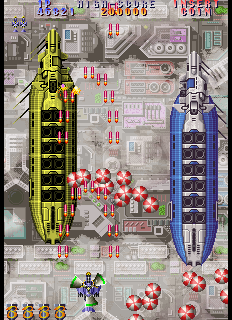 Once again, there are three weapons, each with different colors. Red is called Red Fang, which shoots waves of powerful missiles straight ahead, very similar to the default weapon from the first Twin Cobra. Blue is called Blue Smasher, exactly like the blue spread shot from Twin Cobra. The Green weapon, however, differs depending on which player you are. Player One gets Thunder Claw, a huge missile that is accompanied by many smaller homing missiles. Player Two gets Binchou Laser, a powerful beam that shoots blasts of electricity to the sides of it.

Another cool new feature is the super bomb. Bombs are powerful enough, clearing everything on screen, and under normal circumstances, you can carry up to four of them. If you pick up a bomb when your stock is full, one of your bombs will start glowing. It is now a super bomb, and dropping it will make an explosion even greater than a standard one. Even though super bombs are cool, they are not particularly useful because regular bombs are powerful enough. The scoring system is simple, as certain dropped enemies drops stars, which increase in value as you pick them up, up to 10,000 points each. Die, and the value resets back down to 100.

Even though Twin Cobra II has some very fun weapons to play around with, it excels with the creative use of scaling effects. Granted, the effect is rather restrained and not used to nearly the same effect as, say, Thunder Blade, but it cool when it pops up. They tend to twist and turn, diving in and out of everything from sewer systems to bizarre polluted canyons, to an enemy base located inside a volcano. Scaling does not end there, as enemies will jump out from the background and sometimes take cover from your shots. One of the bosses, a gigantic tank that is the size of a house, parachutes in from above your helicopter and lands, ready to fight. Another one of the best parts is a mini boss you fight on the last level called Heaven’s Gate. It’s a Compile-style boss with turrets all over it. Once you defeat Heaven’s Gate, you dive straight into it, moving onto the next part of the level. Vimana had a very similar effect on its last level, but it was not nearly as impressive and did not come with a fun mini boss to destroy. 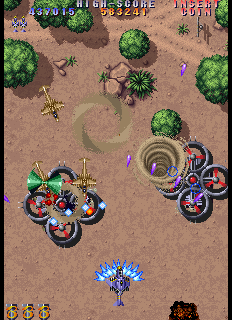 Twin Cobra II was the last and best game in the Tiger-Heli series. Takumi may be better known for its modern style shooters such as Mars Matrix or Giga Wing – and even this one feels more “old school” than Toaplan’s later games – but it’s still impressive and serves as an excellent swan song for a bygone era.

A Saturn version was also released under the name Kyuukyoku Tiger II Plus, released by Naxat. The Arcade mode is automatically set in tate mode. The Saturn mode is a pretty authentic port of the arcade version, with a bar on the side of the screen to maintain the same horizontal resolution, as well as screen scrolling if you move forward and backward. The Arrange mode adds a brief CG introduction, mission briefings between levels, a extra brand new soundtrack using higher quality synth, palette changes and some rebalancing, as well as an extra seventh stage. 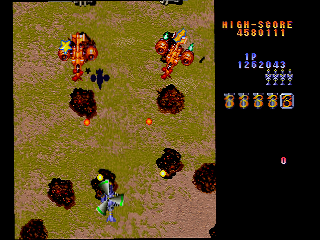