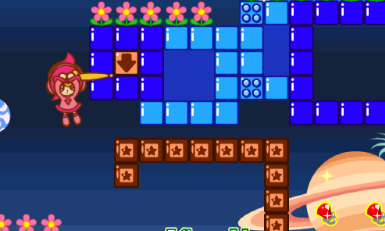 There’s a certain notion among gamers that can be defined by anyone’s words in different ways such as “classic arcade gaming” or “glory of arcade times”. Besides this being correlated mostly to shorter games with extended length by the challenge, learning curve and rewarding gameplay, ultimately it all comes down to the fact that arcades used to be home for innovation. Entire genres were born and refined, and many tropes and design choices are rooted deeply even in forthcoming generations.

Without a doubt, Taito is one of the major players in that field, and one of the oldest as well. Since their first arcade release in 1978 with Astro Race, games that have the Taito logo usually contain a lot of charm and classic arcade aesthetics, so it seems rather fitting for them to bring back 2D side-scrolling action with Spica Adventure. They did so in a rather conventional yet unique way. Regardless, Spica was quite a risky adventure for Taito. Originally it was developed exclusively for Japanese mobile phones in 2003, later followed by a 2005 PCB updated version for arcades. Commercially speaking, it is a curiosity of a game since it isn’t even based on any existing franchise. For example, if you check the list of existing Taito Type X arcade games, most of them are based on known brands or at least genres that have survived in arcades, with almost 8 out of 10 titles being fighting games, even before Street Fighter IV‘s impact in 2008. New titles like Chaos Breaker and Battle Fantasia play it more or less safely too and a few possible exceptions to the trend would include Homura and Trouble Witches AC, both being fresh offerings in the shoot ’em up genre, but even on that end of the spectrum you find two more Raiden games and the third installment of Giga Wing. One game stands out in that list, and ironically it’s one of easiest to ignore. That game is of course Spica Adventure. 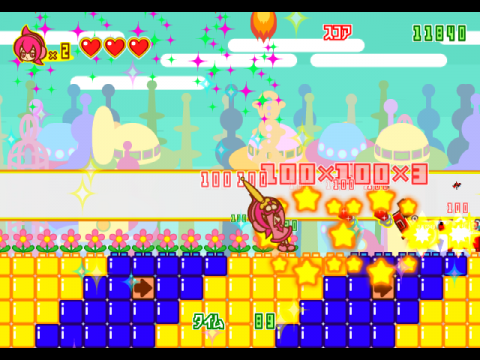 The title itself sounds odd yet catchy; one can’t help but think if it was meant to show possession, but actually the protagonist’s name is Nico, and “Spica” is the name of the star in the Virgo constellation (and possibly where the action takes place). Also seeing the star on the logo and the countless ones in the game, one can’t help but notice the uncanny resemblance to Nico’s older cousin Mr. Driller, both sharing a lot of the same flair and visual style, albeit our heroine uses an umbrella instead. Oh and did we mention how much ass she kicks with that? A little girl traveling the universe with her rocket jet, landing accidentally in a distant planet of robots, beating the hell out of them à la Devil May Cry style with a magic umbrella, and all of this while wearing agonizing amounts of pink. There you have it internet, your new source for fan-fictions.

The whole setting is wacky and upbeat, with the tone being set immediately from the ridiculous intro. More importantly, the entire game’s presentation oozes charm, regardless of one’s appreciation for the kiddy context. The 2D graphics are particularly well-done and stills from the game could give the fake impression of an anime. The planet itself is a toy land coming to life, full of LEGO bricks and wind-up machines, so overall the “plastic” visuals are fitting and might even make up for the rather primitive animations. It’s cute and kinda girly, but it also has a cool vibe of retro pop art.

Even though superficially it might turn off many people who would easily assume that Spica is for kids and there’s nothing a gamer would get out of it, remember that it’s still Taito we are talking about here. They cooked something interesting and indirectly reminiscent of the Umihara Kawase games. Get this straight: Spica Adventure is a beat ’em up platformer with little bits of modern games. The gimmicks revolve around one single aspect, that is the protagonist’s umbrella which serves as a weapon, shield and tool for moving around, so it’s not surprising that Nico’s moveset is quite vast. The umbrella can be used as a parachute while holding the jump button in the air, making farther platforms easier to reach. It can also serve to float on water automatically upon contact (where also a spinning attack can be performed). Most prominently though, the player can thrust the umbrella into any part of the environment and use it to fling Nico in the air, opening up possibilities for some really interesting platforming.

Lastly, the umbrella can be used as a shield to deflect enemy fire and cause massive damage; even most bosses are easily dispatched in this fashion. By holding down the attack button, the player is stuck in one position but can freely move the umbrella in 8 directions to parry and counter-attack when necessary. Deflecting projectiles can be done even when using the umbrella as a parachute, albeit it works only from above. One interesting touch that adds to the beat ’em up tropes is that you don’t get hurt by touching most enemies like it happens usually in platformers. This allows the player to finish the levels even faster, and while it sometimes decreases the challenge, it also provides another layer of choice and freedom in how to approach stages, and it works for this type of game. 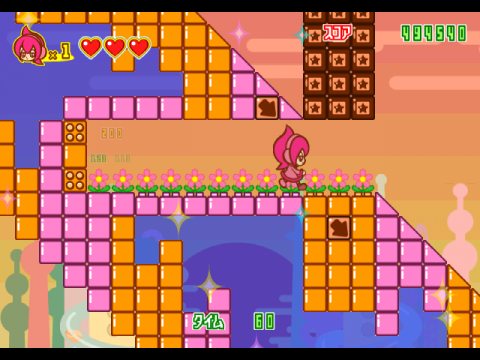 At its core Spica Adventure shines brightly, but the overall stages can be quite dull to play. The level design doesn’t make full use of the vast potential of the mechanics, and while the game lacks a decent challenge or difficulty, there are at times frustrating moments due to unbalanced levels. Some particularly unfair situations include when you are close to or between walls and need to open the umbrella to defend from incoming star projectiles, but instead you end up getting it stuck in the adject wall for doing a fling maneuver. It feels like everything, including the smooth controls and combat system, would definitely benefit from some polish and a more variety in situations. In the end, it’s an arcade game at heart, so the emphasis is not on exploration but reaching the end of the level as fast as possible with as many points as possible. Beyond the option of jumping on a less accessible platform to grab a few more gems, there is not much to do in the game besides reaching the end of the otherwise short levels. There is the possibility to choose between three different stage paths that differ on challenge and bosses, and there are even two endings to unlock (even a third if you don’t want to reach the crying baby during the rain sequence, amusingly drowning all the toy land of Spica).

There are some good moments as well, like a Space Invaders-themed boss, but unfortunately the ideas are generally underplayed. It feels like terribly lost potential for such a vast moveset at the player’s disposal and gives to Spica Adventure an “identity crisis” regarding the genre it tries to represent, having so many ways to act with such minimal goals.

Speaking of which, there is a time limit for reaching the finishing platform. If the player runs out of time, they are chased by something that looks like some Eldritch abomination took the form of a giant robot with red eyes of death and a monitor on its chest that displays leftover scenes from Samara’s tape from The Ring, like some creepy face with a hood… because why the hell not. On top of that the sound this guy makes upon entrance is a loud mechanical buzzing that tears through the speakers like hellish chainsaws that directly maul your soul. Sure, it is the obligatory one-hit killer when the time limit ends, much like in many other games, but it’s such a stark contrast to the rest of Spica that one can’t help but think if the developers put it on purpose due to some business contract to increase diaper sales. And if all that wasn’t enough, when the player runs out of life, Nico morbidly drops dead with eyes wide open and no pupils, her soul visibly getting out of her body… You know, a kids game. 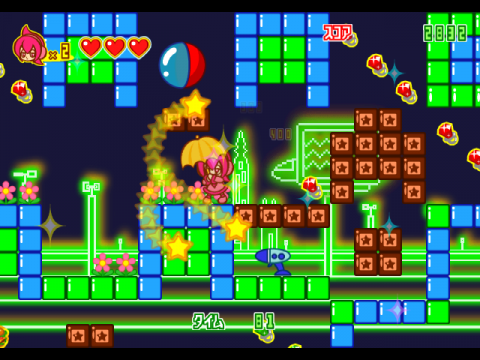 Regardless, the suspension of disbelief is strong with this one, as it is quite easy to shut your brain and enjoy the overall happiness, joy and silliness that Spica Adventure is. It’s just a fun romp full of fireworks and festivities and toys and video game tropes, with visible stars and galaxies on the background that decorate the vista. Sure, the colors are bright, so much at times that you can’t make out incoming projectiles, and sure some visual elements turn many people off, but just as you score your first combos and learn how to move around with the umbrella, the game quickly sucks you in and makes it very easy to blast your way through the levels. Lastly the scoring system has a rather OCD touch to it; flowers grow on every straight block you stand on, so one might be even more inclined to run through every corner of the stage. Addicting stuff.

It is impossible to talk about Spica Adventure without mentioning how much it takes from other games including Taito’s own classics like Bubble Bobble, Liquid Kids, New Zealand Story, and even more so, it plays like a distant relative of Umihara Kawase. Yet despite all of that, it still feels like a genuinely fresh experience; it can attract gamers with its mechanics and play style, but at the same time it might detract them due to lack of a respectful difficulty curve. While it’s mostly doomed to obscurity, Spica Adventure manages to do it’s own thing, and a lot of it it gets quite right. It’s a shame that the game never saw any port to any other system, let alone outside of Japan. On 2011, Spica Adventure was added to Taito’s own NESiCAxLive system, so technically it’s still “alive”, but it would have benefited even more from a handheld release like the PSP or DS. Since the arcade version is based on PC hardware and Windows XP operating system that Taito Type X games use, the only way to try the game outside of its original environment would be to fiddle around with hacks that can run it on a computer, and even that can be hit and miss since it doesn’t involve conventional emulation.

Interestingly, one of aspects of interest for some might be the music composed by Hiroki Yamamoto and Sayoko Ueda of “Zuntata”, Taito’s in-house band. The music consists of a unique soundscape full of poppy synths and quirky melodies; a rather fun accompaniment to the visuals that is slightly lacking outside of the game. To match with the NESiCA date, the soundtrack received a digital release in 2011 officially available on iTunes, surprisingly even for U.S. markets – a rather weird move considering the “this is clearly for children” factor and Japanese exclusivity of Spica Adventure.