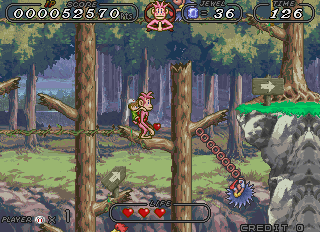 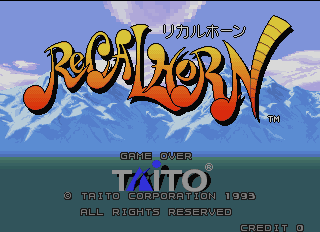 Amongst the lineage of peppy Taito platformers, Recalhorn is something of a missing link, primarily because it was never publicly released. The development went far enough to get a playable build, but allegedly it was shelved after negative reception in focus testing. Nevertheless, the prototype board found its way onto internet and is now available on emulators. In this current state, the game is missing a bit of polish (e.g. the physics are often strange and inconsistent), but what’s there can be played from start to end.

Anything that resembles a story in Recalhorn is either unimplemented or broken in this point, though from sparse dialogue we learn that the world of Emerald Forest is in rather vaguely explained danger, and our hero, Recal, is the only one who can stop it. Once the game begins proper, Recalhorn reveals itself as a fairly typical side-scrolling platformer. Recal is equipped with a horn that spouts out a note traveling in arc, though he can also stomp on enemies. Compared to Recal’s small size, the levels are huge and expansive, littered with a swarm of enemies in-between. However, the game is very clear about the direction you need to go, usually from left to right, so the time limit is rarely an issue unless you stumble around too much. There’re only 9 levels in total, likely due to that the development was dropped in the midway.

Most of the defining elements found in Taito arcade platformers are either scaled back or gone altogether. Taito was known for putting in tons of secrets in their games, but there’s not much done with Recalhorn. Its linear structure is a little similar to Liquid Kids from 1990, but even that game had hidden warps to find, whereas Recalhorn simply doesn’t. There’re still a few branching paths that lead to different parts of the stage, and searching every corner usually rewards you with chests that contain a big score bonus, but otherwise Recalhorn feels remarkably straightforward.

Recalhorn’s unique gameplay feature is that you’re not all on your own – a few animal friends in Emerald Forest, once freed from their cages, offer a ride on their back. You can summon these helpers at any time by spending one of your animal coins collected in levels. There’re three kinds of helper: A monkey that can reach great height and hang on ropes, as well as having nearly-game-breaking spin jump; a seal that can swim through water and perform spin slide; a lion that can run and charge incredibly fast. The restriction is that each one requires their own animal coins, though the game almost always places one of them in given area when their help is needed. You share life meter with your animal, however, so it’s best to keep your friend in control.

The levels in the Emerald Forest hit various platformer conventions, such as mountains, crystal caves, sunken ships, beach, and gigantic castles. Outside of Castlevania-esque clockwork towers, these aren’t terribly creative from design standpoint, but the general presentation is well-crafted, and every single level is distinct from one another. Recalhorn’s semi-realistic art style is another aspect that sets it apart from usual Taito affair. Moving over from the blocky, dreamlike caricature of previous games, the game now looks like it takes place in an actual, sensible world, although arguably this results in slightly more generic atmosphere. There’re also boss fights every once in a while, though they’re not all that memorable, with the exception of particularly irritating battle against a giant squid. As a clever easter egg, in one of the early levels, you can spot feisty blue hedgehogs wearing white gloves and red shoes, an apparent jab at Sega’s Sonic the Hedgehog.

All things considered, it’s not an easy game to conquer in an afternoon. Everything looks very generous at start, as your character is able to take no less than 5 hits. However, your health does not replenish after clearing a level, and restoration pick-ups quickly become scarce as you press on, so the margin for error is smaller than it seems. Thankfully, checkpoints are extremely common, so all you need is patience to see the ending (or lack thereof).

Recalhorn is quite enjoyable, but some of its mechanics aren’t well thought out. First off, there’s a bit of discrepancy regarding the animal helpers. When by himself, Recal is rather wimpy, and his horn is too limited to be of any interesting use. The advantage of animal helpers is generally so huge that you may not want to go back, but they’re also hampered by gigantic hitbox and finicky controls, which is prone to cause cheap death. To get anywhere without hurting yourself, you’ll have to constantly switch between riding your friends and going on foot, just so either one’s weakness won’t work against you. The end result is a game where your character feels weirdly handicapped all the time.

This leads to another problem, that since you need to manually pick an animal each time through separate menu, it tends to disrupt the action. Besides, the game gives away so many animal coins, they’ll end up needlessly cluttering your pocket by the time you reach the final boss (cruelly, he steals all the coins and forces you to fight alone). So instead of adding such hassle, why not just give the animal’s abilities directly to the player character?

It doesn’t really stack up in other areas as well. The level progression is leisurely paced, which keeps the game accessible to average players, but completely betrays the hectic fun that typified Taito games. The game is ripe with excellent spritework and jolly soundtrack courtesy of Zuntata, but they, too, lack any particular standout. While good-looking, its humble visuals don’t do it justice to the powerful Taito F3 System it’s developed for, which ran spectacular RayForce and Elevator Action Returns.

But the biggest reason why Recalhorn failed at the location test is probably because, for all intents and purposes, it doesn’t really feel like an arcade game. It’s as if the developers were working with best intentions, then suddenly realized this was supposed to be coin-op and quickly tinkered into what it is, creating a wildly ill-balanced game. It’s still pretty fun and harmless, and ideally the game would’ve used more refinement, and shifted its development toward home platforms, where this kind of structure makes more sense. Regardless, it’s a nice thing we’re still able to take a look at the game in its unfinished form.