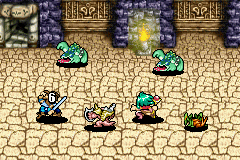 Lufia: The Ruins Of Lore returns the series to the puzzle-dungeon style game-play of the second game, along with re-introducing the capsule monsters from 2, and adding a new job system to the title. The game’s story is set 20 years after the events of Lufia II. It’s considered a side story – the Japanese title is Estopolis Gaiden since it doesn’t directly involve the Sinistrals. With the discovery of various ancient ruins tied to lost civilizations, groups of people called Hunters (essentially licensed adventurers) go out to explore these ruins for fame and fortune.

The main character, who has set out to become a Hunter, like his absent father before him. His dungeon traversal ability is the ability to cut through bushes in dungeons.

Eldin’s childhood friend, who took the Hunter exam with him, and who is incredibly loyal to his friend. His dungeon traversal ability is the ability to cross gaps with a grappling hook.

Eldin’s other childhood friend, who took the Hunter exam separately from the rest of the party. She tends to bicker with Torma like an old married couple. Her dungeon traversal ability is the ability to thaw items or destroy them with fire.

Rubius – A priestess who hires the party to help her open a portal to the “Promised Land”. She at no time takes part in combat. However, she does have a special ability to read Ancient Text, which in turn can provide hints to puzzles. 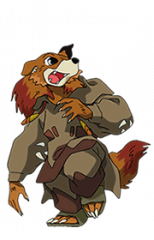 A guest party member who is half-beast, half-human, and who is rejected by human soceity. His special ability is the ability to smash walls and barrels with a hammer.

Returning from Lufia II, Dekar joins the party as a guest member to provide some muscle. He does not have any traversal abilities. 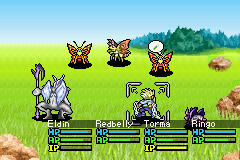 Lufia: The Ruins of Lore (henceforth Lufia Advance), from a gameplay standpoint, is very close to Lufia II. Dungeons are navigated essentially the same way, with the player having special abilities that allow obstacles to be by-passed and secret areas found. However, like the later remake of Lufia II for the DS, these abilities are tied to party members, instead of items collected through dungeons. Perhaps the two biggest changes are the way how Capsule Monsters work, and the skill system.

In Lufia II, players could find capsule monsters in dungeons – either in side areas in the main dungeons, or through smaller areas found while exploring the world map. Once these monsters were found, they would take part in combat, acting on their own, and leveling up with the rest of the party. These monsters could evolve into new forms by being fed items from the character’s inventory. In Lufia Advance, on the other hand, the game takes a cue from the Pokémon series. Almost any monster in the game, aside from boss monsters, can be captured by party members using capsule items. These monsters can then be tied to one of the main party members. They’ll receive a share of experience from combat, and their relationships with party members will build, the longer they’re with those party members. Once each monster levels up a certain degree, it can be evolved into a new form by being fed a fruit tied to that monsters elemental ability (Earth, Wind, Fire, Water, Light, and Dark). 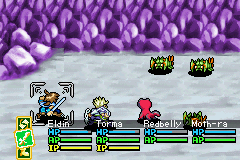 Also, unlike in Lufia II, where each character had an IP meter that was tied to special abilities for their weapons, here the IP meter allows characters to install or fuse with a monster they have a good relationship with. This combined monster has considerably higher defense than normal, and also is able to perform some potentially devastating special attacks.

Furthermore, rather than letting the player purchase spells from shops, Lufia Advance uses a job system, similar to the Final Fantasy series. There are six basic jobs that characters can take: Swordsman (like the normal Fighter), Fighter (like Monk), Thief, Priest (White Magic user), Mage (Black Magic user), and the Chemist (which focuses on inflicting poison and status effects on enemies). Each class gains abilities based on the amount of experience that characters have gained. Further, five of these classes also have an advanced class the characters can graduate into after they’ve mastered the base class. Swordsmen can become Knights, Fighters can become Brawlers, Thieves can become Rogues, Priests can become Bishops, and Mages can become Wizards. 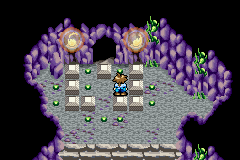 The Ancient Cave has also been changed. It’s still a randomly generated dungeon, but only Eldin and his capsule monster can go inside. Players can only take 10 items (or types of items) with them when going into the Ancient Cave, and it’s possible to start at any previously reached floor. However, Eldin cannot leave the dungeon without using an item called the Providence, which is randomly dropped in treasure chests or from bushes. Also, if he falls in the Ancient Cave, all the equipment that has been brought in (including equipped items) is lost.

Another significant change is the way navigation in the world works. In all the earlier games in the series, you traveled the world in the traditional RPG fashion – navigating towns & dungeons and various other areas, and then going between them in an overworld area, where there were also random encounters. In Lufia Advance, you travel from area to area through routes, each of which is essentially like a dungeon. Once a route between two areas is cleared, you can then freely warp between the cities (or routes, if you want to grind), without the use of any special items. However, as part of this, the game makes exit items particularly scarce. If you need to exit a route or dungeon without the use of an Escape Ball, you need to have learned a specific ability from the Thief class. This, combined with MP restoration items also being scarce, can add some additional difficulty to the dungeons. 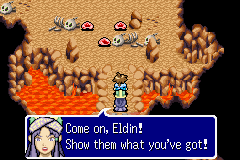 Mechanically, Lufia: The Ruins of Lore is very good. It maintains the puzzle dungeons that made Lufia II fun, while making capsule monsters even more useful. The Job system also makes things interesting by allowing for a multitude of play styles. However, it’s missing a certain something compared to Lufia II. The characters aren’t as fun, and the story really lacks the drama in something like Maxim and Selan’s inevitable sacrifice to keep the climax interesting. The music is also extremely forgettable. Perhaps this is because the game was not developed by the folks behind the first three Lufia games, but was instead handled by a company named Atelier Double, whose works mostly consist of assorted outsourced projects of little interest. The English localization was also handled by Atlus rather than Natsume. The experience isn’t as rich or as memorable as its predecessor, but as far as Game Boy Advance RPGs go, it’s still worthwhile.