The Legendary Axe is NEC’s relatively high profile (for a TG-6 game) side scroller, meant to be the equivalent of Castlevania and Ninja Gaiden for the NES, or Revenge of Shinobi for the Genesis. Developed by Aicom and released by Victor Music Industries in 1988 on the NEC PC Engine in Japan, and in 1989 for the TurboGrafx-16 in America, The Legendary Axe (Makyou Densetsu in Japan) stars a caveman wearing nothing but an animal skin around his waist, while he faces evil jumping lizards, vampire monkeys, and floating eyeballs, equipped with only a tiny little axe. It was developed by some of the same staff as the rather awful Amagon for the NES, which also starred a muscle dude and took place in a jungle setting; thankfully, this outing is quite a bit better. 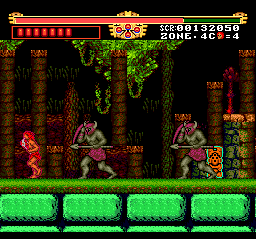 Per most late 80s arcade plotlines, rescuing the Damsel in Distress, your girlfriend Flare, is your utmost priority. She’s captured by the half-beast lord Jagu and he hates semi-naked cavemen so much that he sends a veritable gamut of evil creatures after you. The hero, Gogan, receives a spiritually powerful Legendary Axe by the village elders so he can smite down Jagu and win his girlfriend’s heart. The halfway amusing thing is that you hear nothing about Jagu during the course of the game, and unless you read the manual, you may think that your enemy is Flare due to the game saying, “Flare is waiting for you” whenever you finish a stage.

The stereotypical Tarzan-a-like who’s the hero of this game. Gogan wears just an animal skin and is by far one of the most under dressed heroes ever.

Gogan’s girlfriend, who wears more clothing than Gogan in the game. She wears just a thong on the Japanese cover. 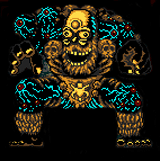 The evil lord who is great at hiring minions who are quite difficult to kill. 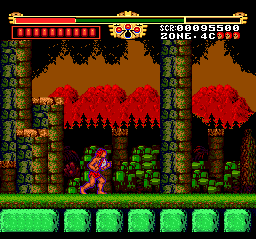 When starting your adventure, you guide your hero Gogan across a lush jungle landscape. Right after the initial encounter – where you fall into a pit and face a giant spider, you gain a powerup that allows you to charge your axe. Your axe charges as long as you’re not using it, and resets whenever you attack. Naturally, the longer you allow it to charge, the more damage it does when you hit an enemy. It lends a bit of strategy to the otherwise standard action, since you need to decide whether to hack away quickly but weakly, or dodge enemies for a few seconds while your axe powers up. You can gain up to four powerups that fit into the four holes in the axe, allowing your power meter to expand even further. When you have fully powered up your axe and use it on a full charge, the screen flashes while you hear a large explosion, and your poor opponent will usually die in one hit. The levels are also filled with little statues that offer bonuses, similar to the candles in Castlevania. Unfortunately there aren’t any secondary weapons to use, as your arsenal feels a bit limited.

The game follows a linear path with sidescrolling stages. The levels are fairly diverse, from jungle landscapes to haunted to caverns to ruined castles. The levels are referred to as zones, with five in total. Some of the levels are so huge that they are divided into letters. Interestingly enough, the level design of the final zone removes linearity and forces you to memorize where you have to go – it’s a large maze just like Bowser’s Castle in Super Mario Bros. The maze has around 20 areas using almost every letter of the alphabet because it’s such a huge stage. 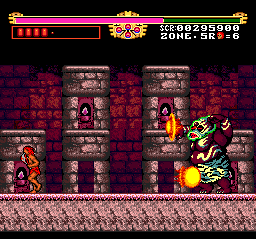 The enemy designs are pretty amusing, featuring vampire monkeys that jump on your neck, disgruntled grizzly bears, and gorillas that pop out of the background throwing large boulders at you. Whenever you a kill an enemy, they perish in a fancy little explosion, which looks unnecessarily cool. When facing off against the giant spiders, you even see their legs get hacked off as you deal damage.

The first stage is easy, but the difficulty increases sharply after Zone 2. The designers really love pits and small platforms so much that they also included lots of enemies that are more than eager to knock you off. It doesn’t help that you get thrown back pretty far when you get hit, due to Gogan being a wimpy girly man who can’t even swim. You can also be like Tarzan and swing from vine to vine, but the controls for this are cumbersome and requires precise timing, or else you’ll fall and die a horrible death. Some of the enemies are hard to kill as well – you’ll often fight three at once, and since they take multiple hits (or a single fully charged hit) to kill, that it’s easy to get overwhelmed. During one annoying boss fight, you’re fighting two boulders and the only way to dodge them is by swinging on the vines in the room. Since it’s so hard to use the vines, you’ll probably end up taking massive amounts of damage before winning the fight. 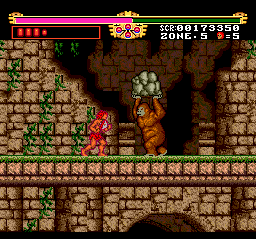 The music here also fits the lush jungle landscape, and some of it is pretty catchy. It was composed by Atsushi Chikuma (Super Bomberman) and Toshiaki Takimoto (Mario Party 2). Despite fitting the setting, the music suffers from a limited number of music tracks, so you listen to same tracks in this game over and over quite frequently.

Like most early TurboGrafx-16 titles, the visuals are marginally better than a later gen 8-bit game, although the expanded color palette allows for more detailed backgrounds and sprites. The jungle setting looks pretty decent, as does the animated fire in the fireplaces in the final stage. The last boss has animated tiles on his body, giving him an almost psychedelic look. The large sprites where used in plenty of marketing materials at the time to show off how much more powerful the system was compared to the NES. Sometimes the designers went a bit overboard though. For example, when Gogan crosses the foreground he gets lost in it, making him impossible to see, and it’s easy to get hit by the invisible enemies that are hiding there. Still, despite some of these annoyances, it’s one of the better early HuCard titles, and one of the more notable games on the system.

This game was followed up by The Legendary Axe 2, though technically it’s an unrelated title by a different developer. The team at Aicom followed this up with the arcade/NES game Lord of King, also known as Astyanax, which plays very similarly to this game.