Keith Courage in Alpha Zones is primarily remembered as one of the first games released on the TurboGrafx-16 (it was even packaged with the system when it first launched). To be brutally honest, this is because there’s nothing else worth remembering about the game. That isn’t to say the TurboGrafx-16’s launch is the only area of video game history that Keith Courage intersects with. Like many games from the 80s and early 90s (Decap Attack, Dragon Power), Keith Courage was originally based on a somewhat obscure anime (in this case, Spirit Hero Wataru) before the international release stripped it of any and all branding. And in terms of how the game plays, it borrows a lot of its language from Wonder Boy in Monster Land. 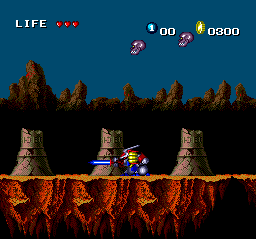 However, the game’s licensing history only comes to bear under specific circumstances, and comparing Keith Courage to Wonder Boy only reveals the lack of nuance in the former. At best, Keith Courage is a confusing, nondescript mess of a game that fails to elicit any real emotional response. At worst, it’s all bluster, affecting edginess attitude while offering very little to actually back it up.

The game’s premise is surprisingly dense, although this has more to do with an odd translation than anything else. Aliens have invaded Earth and formed a coalition of Beastly Alien Dudes, B.A.D. Their goals aren’t particularly ambitious. They just want to cause trouble for Earth’s inhabitants and conquer the world. Standing against them is Keith Courage, the game’s hero. With his trust Nova Force, the robot suit his now-deceased father built for him, Keith journeys through the Seven Deadly Zones to put an end to B.A.D. and restore peace to the world. Mechanically speaking, Keith Courage is very simple. While play is divided into two sections – on foot and in the Nova Force – both sections involve jumping across gaps and platforms while slashing at an array of fantasy monsters. The only notable difference is that while on foot, Keith can collect gold and buy the weapons/supplies he needs to brave the world ahead of him. He can also talk to one of three characters, who, in addition to giving him advice, also serve their own unique purposes: 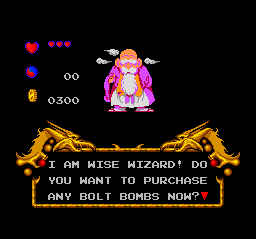 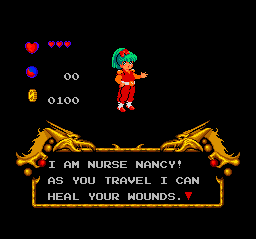 Nurse Nancy will heal you for a fee. 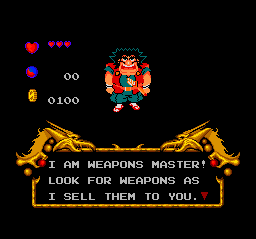 The Weapons Master will sell you weapons to use in the Nova Force sections (Keith uses the same sword throughout his journey). 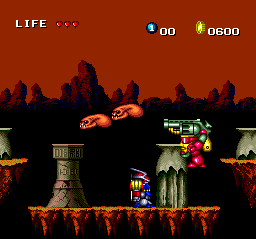 In other words, it’s the same familiar narrative that many other stories before and after this game have utilized: a plucky young hero fights for justice in the face of overwhelming odds. Heroes like this are popular because (in theory) they serve as an easy source of inspiration. They perform fantastic feats of courage despite not being fantastic in origin themselves. They’re ordinary people whom the audience has no trouble relating to. Good heroes (or at least good heroes of this variety) inspire any witnesses to their heroism to perform similar acts of greatness in their own lives.

Keith Courage isn’t one of those heroes. It’s not because he’s unrelatable – in fact, it’s not hard to see how Keith was carefully crafted to be a relatable hero – but because the game fails to present anything for the player to ground his heroism in. The other characters don’t ground it for him, since Keith’s relationship with them is non-existent. They’re little more than guideposts who exist to point him in the right direction. Likewise, while the world may look like it was thrown into chaos, it’s hard to gauge to what extent that’s true without any understanding of the world before B.A.D. entered the picture. For all you know, they haven’t changed the world all that much. Without that understanding of the world, it’s impossible to understand Keith’s relationship with it, much less what’s at stake should he fail in his quest. Much of this issue is grounded in the fact that it was based off an anime, and Japanese players would have the blanks filled in by that. American players did not, so much of the game lacks context. This is the case with many video games, but it’s a little odd for a game chosen to be the introduction to the world of the TurboGrafx-16. 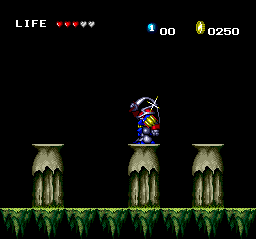 Even assuming that problem was taken care of, Keith Courage would still have to contend with its problems committing to a tone. Take the Keith sections, for example. Their bright colors, repetitive imagery, and imaginative architecture (one level features another world floating just above Keith’s head) suggest an abstract and dreamlike world for the hero to explore; one in which he can forget whatever worries assail him in the real world and allow himself to relax.

If those were the developers’ intentions, though, then the actions they allow Keith to take within these worlds run counter to that objective. Despite similar levels of repetition, Keith’s actions utterly lack imagination. His movements are slow and plodding. The only things Keith (and the player controlling him) is allowed to show any real interest in are monetary transactions and the work that’s necessary to make those transactions (IE slashing away at enemies for profit). Far from connoting whimsy and wonder, these portions of Keith Courage overwhelm you with a dismal sense of reality. It intrudes into the game’s hero fantasy, undermining it and stripping it of whatever joy it might have previously held. In this context, the game’s insistence on its proceedings being fun comes across as stubborn and made in bad faith. 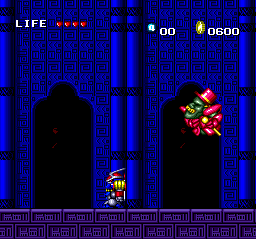 The Nova Force sections, meanwhile, are just as conceptually interesting yet succumb to the same fundamental flaw. Part of what makes them interesting has to do with how they invert the previous formula. Unlike the Keith sections, there’s no real planning in these areas; no calming repetition, no sense of fantasy to offer reassurance. Instead, platforms and other such elements are haphazardly strewn about the level, and enemies ceaselessly rain down on the Nova Force, whittling away at its armor until it’s reduced to nothing. You don’t even walk right through the whole level. You’re expected to find your own way through because nobody else will find it for you.

If playing as Keith allows you to escape into a dreamlike reality, then piloting the Nova Force thrusts you into an absurdist nightmare, one in which all the world’s ills impress themselves into your being. However, in light of how Keith Courage was adapted for American audiences, it’s hard to interpret whatever stress arises from this experience as an end in itself. It’s more likely that stress exists as a continuation of the game’s power fantasy: show the player a world full of risk and danger, and then congratulate them on having the fortitude to brave it. In theory. 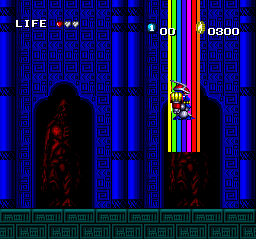 In practice, Keith Courage can never realize those ambitions. The Nova Force sections lack conviction, as they can never fully decouple themselves from Keith’s sense of innocence. For as much as the Nova Force wants to sell danger, the actual experience is about as safe and carefree as what came before it (just a little bit faster). And despite all its posturing as edgy and cool, a lot of what you see would feel right at home in a Happy Meal: floating magicians, gun-shaped robots wearing sunglasses, and many other chunky objects. It’s an odd mixture, to say the least. One part of Keith Courage aims to dismiss the action on screen as nothing more than play. Another part wants to elevate itself above that; to empower the player by asserting that what they’re experiencing can’t be reduced to mere fantasy. These two elements can’t exist together, or at least not to each other’s mutual benefit. Thus it shouldn’t surprise you to learn that the Nova Force’s edginess feels unearned and the game’s continued emphasis of it frustrates more than it excites.

Following its release, Keith Courage more or less faded into obscurity. It was connected to A minor controversy some time later: Electronic Gaming Monthly misidentified Madō King Granzort (a completely unrelated game for the SuperGrafx) as the supposed sequel to Keith Courage, and the rumor has persisted ever since. Other than that, though, there’s not much to say about the game. Keith Courage never had that much to say in the first place, so it’s unlikely a sequel could remedy that situation. Today, the game endures more as a historical curiosity/footnote than it does as something worthy of study in its own right.