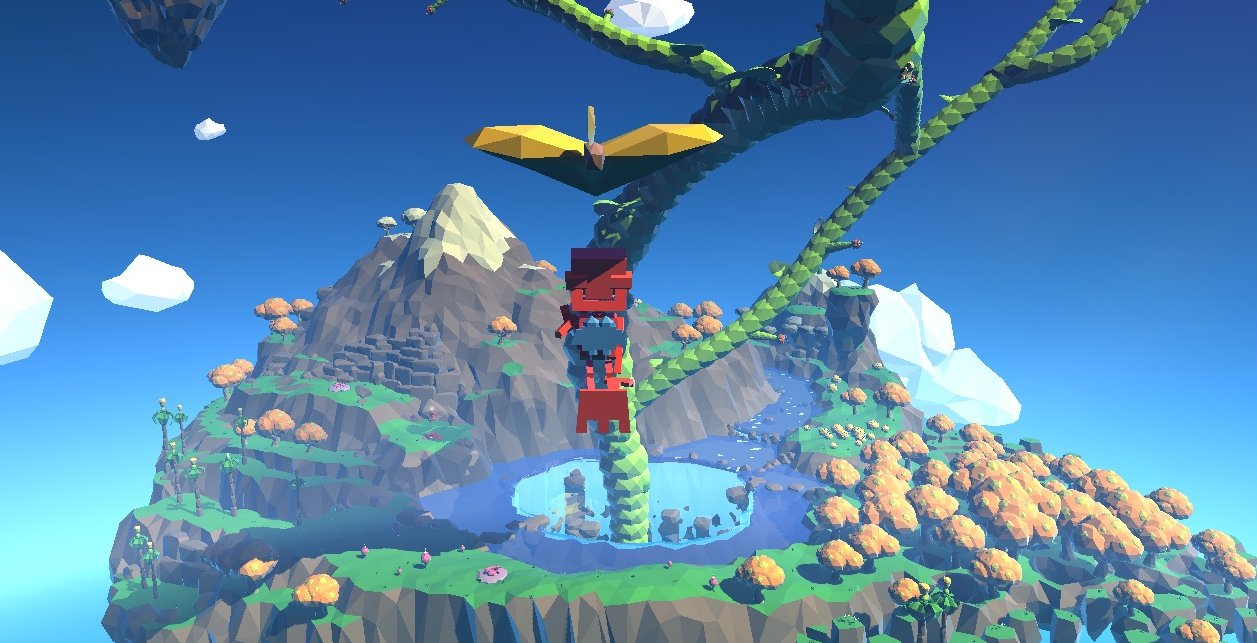 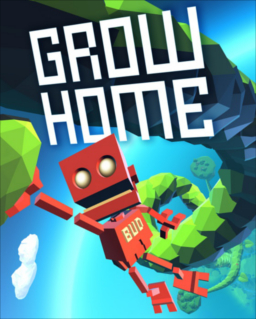 Grow Home is a rather unusual game. Its developer, Ubisoft Reflections, is a team renowned for making vehicle action games full of realistic physics and destructible cars, such as Driver and Destruction Derby. Its publisher, Ubisoft, is a studio known (especially as of late) for putting out massive games in either scope or size, like the Assassin’s Creed, Far Cry and Watch Dogs series. Grow Home is a minimalist 3D platformer where you control a procedurally animated robot growing plants and nothing else. It couldn’t be more unlike its creators’ pedigree if it tried. And yet, the end result is one very fine game that everyone should check out.

Grow Home has you play as a Botanical Utility Droid, or B.U.D, a cute red robot tasked with growing a Starplant as high as it can go until it blooms and creates star seeds. You grow the Starplant by climbing up its stalk until you find long shoots, which you then grow and guide into floating islands glowing with green energy. 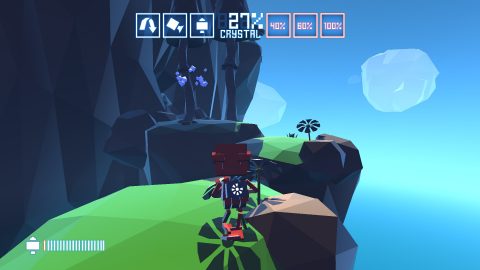 Considering your sole goal is to grow and climb up a massive plant, the game mainly revolves around its climbing mechanics. Yes, B.U.D. can run and jump about the place, but his special quirk is his ability to grab and hold onto any surface he comes into contact with. Each hand is separately controlled, with one button for his right hand and the other for his left, and by alternating your button presses, you can climb slowly and carefully or scramble quickly along wherever you need to go.

But there’s an added complication to the climbing, and moving in general – B.U.D. is procedurally animated, which means all of his parts are moving independently of each other in real time and manipulated by the game’s physics engine. The end result is that B.U.D. moves about haphazardly and skittishly, where even the slightest push in a different direction while running can cause him to tumble uncontrollably in that direction. 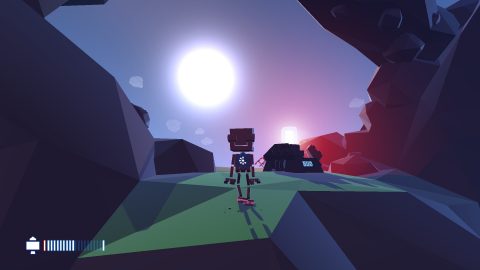 This sounds like the recipe for disaster, but this is mitigated by two factors. One: Grow Home provides you with a few ways to make things easier. Small blue crystals are scattered throughout, and for every 10/20 that you collect, you get a small upgrade. These upgrades include a zoomed out camera to help you see things more clearly, and a jetpack with just enough boost to correct a mistake, but no more. You can also pick up flowers that act as a parachute or leaves that you can glide through the air with, though you have to be careful not to lose them. Bouncy leaves run up the side of the Starplant’s stalk, big stems can catapult you across the sky, and there are even teleporters you can use to quickly get to a certain point.

Two: Grow Home’s controls just feel right. Especially with the PS4’s set-up, where you grab with the shoulder buttons, jump with the X button and can use the flower/glide leaf with Triangle, controlling B.U.D. becomes second nature within minutes of starting the game. Sometimes jumping can be slightly unresponsive, and you might think that you’ve latched onto something when you really haven’t, but it works surprisingly well within the conceit of this game. 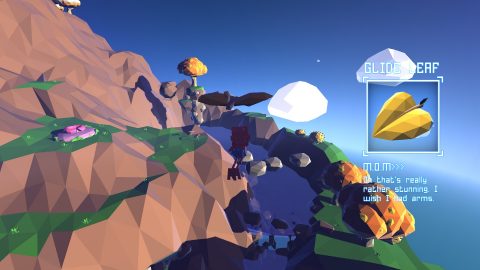 You see, Grow Home is a game about rock-climbing, particularly the difficulty and satisfaction that come with it. Climbing up a cliff-face or a massive stem is a struggle, where any slip, missed grab or fall can be utterly terrifying. There are ways to help avert this, as mentioned above, but the only way you will overcome sheer drops and heights is to keep trying until you do it.

But when you do overcome those drops and heights, just barely scramble your way back from grabbing a crystal hanging delicately off a loose rock, or simply look back down to see how far up you’ve come, the feeling of joy and triumph is simply indescribable. 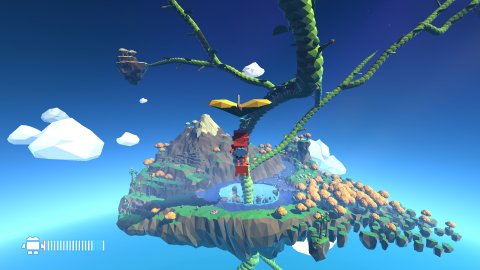 Those positive feelings are enhanced by the simple, but very sweet aesthetics. Grow Home’s environments are rendered with flat-shaded, untextured polygons, calling to mind the look of very early 3D games such as the DOS version of Mechwarrior 2: 31st Century Combat and Starglider 2. While it’s obvious to see where one polygon ends and another begins, this artistic choice is vindicated by the stunning colours used.

The game uses primary colours to make important objects stand out from the rest of the world (B.U.D. and the teleporters are red, the crystals are bright blue, and the floating islands with energy are a practically neon green), while the constant day/night cycle is emphasized with lighting that contrasts very bright colours and strong shadows to create a gorgeous looking world.

In fact, the art direction feels very reminiscent of mid-90’s CGI renders for games like Final Fantasy VII, Donkey Kong Country and Myst, where worlds looked empty but seemed like they could go on forever. It’s a kind of look that Douglas Adams famously called a ‘beautiful void’, and that term describes the world of Grow Home perfectly. 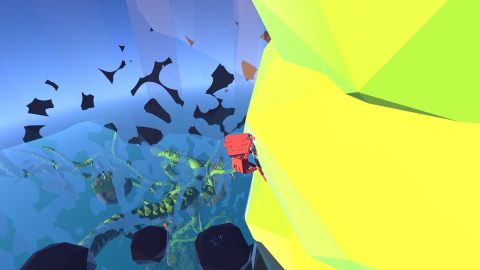 The music is also very minimalist (seriously, it’s one chord that is played seemingly until the end of time), being a soft, ambient tune that echoes the hub world music in Spyro 2: Ripto’s Rage (particularly the theme to Autumn Plains). The effects used in the music fit very well with the idea of climbing further and further into the sky, and it generally creates for a soothing, relaxing song that could be used in a music therapy session without seeming out of place.

The only real downside to Grow Home is that it’s a short game. Growing the Starplant till it blooms will only take about an hour or two, and while you can add an extra couple hours towards finding all the crystals, exploring secret caverns in the larger islands, and dragging flora and fauna into the teleporters for scanning, that’s pretty much it for the game. A second quest-type mode where you would grow another Starplant with a completely different range of islands would have been much appreciated.

Still, because the game is so short, that leaves you easily able to replay it without slogging through hours of content, and to do so in a variety of different ways (collecting no crystals or not using flowers/leaves, for instance), so even that can be considered as something of a positive. 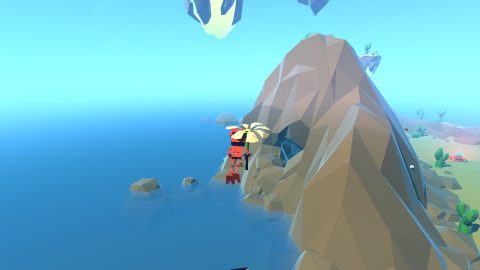 In the end, Grow Home is an experiment that worked out far better than perhaps anyone could have expected. In fact, it worked so well that Ubisoft and Reflections eventually decided to make a sequel to the game in 2016: Grow Up. While a good number of sequels tend to feel rather pointless, Grow Home laid a good foundation that could be expanded upon – you could introduce different environment biomes, new types of Starplants, new abilities, more islands to mess around in, etc.

However, Grow Up would try and do all of these ideas at once, and would end up paying for it…

A discussion by game designer Andrew Willans about the evolution of the Star Plant mechanics –  http://www.gamasutra.com/view/news/235663/Game_Design_Deep_Dive_The_plantgrowing_mechanics_of_Ubisofts_Grow_Home.php