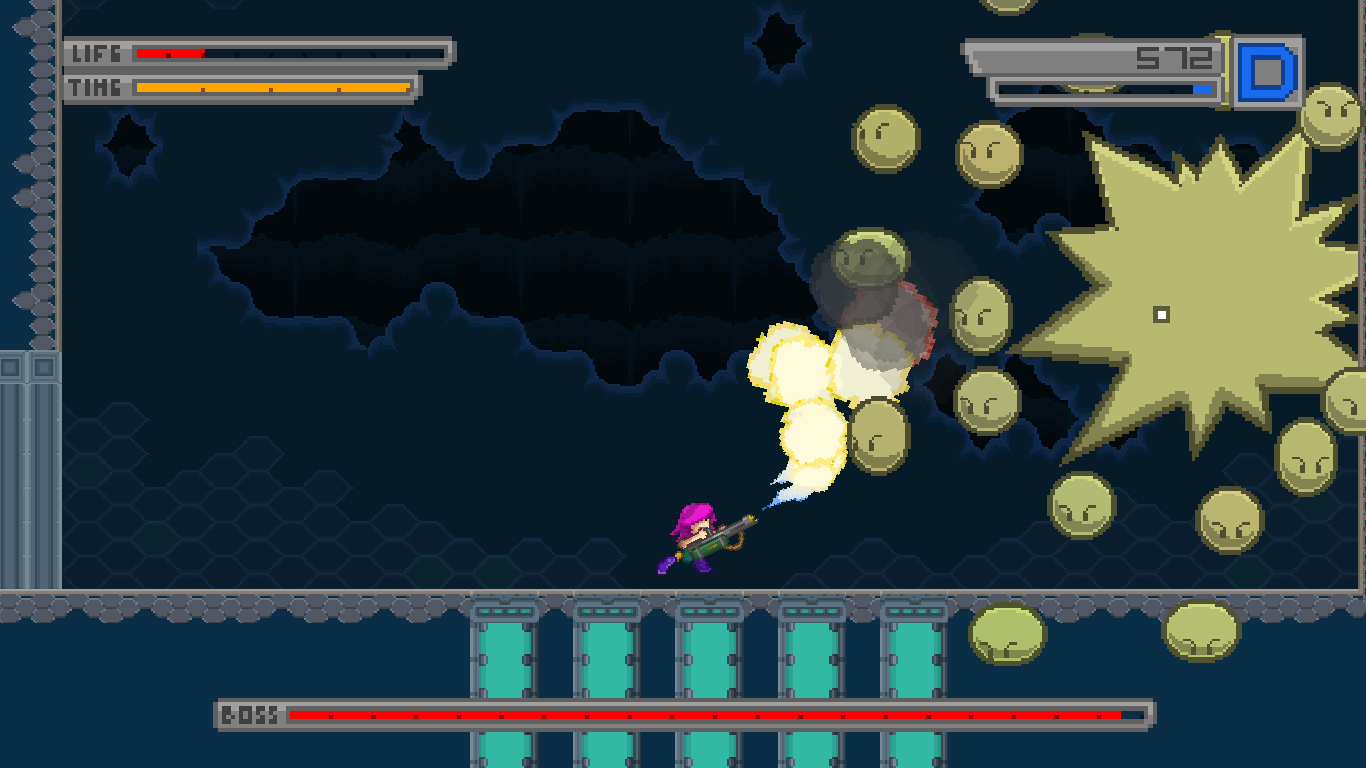 Indie studios love making games rooted deeply in the mechanics and conventions of the era before 3D, and for good reason. It’s a time of such mechanical perfection that most everyone has familiarity with at least one genre, and with such a solid foundation, that leaves a lot of freedom to add on to established formulas and make something fresh. That’s the idea behind Bleed, a side-scrolling platformer-shooter with nary a care in the world and only focus on killing all sorts of classic videogame baddies in the flashiest way possible. 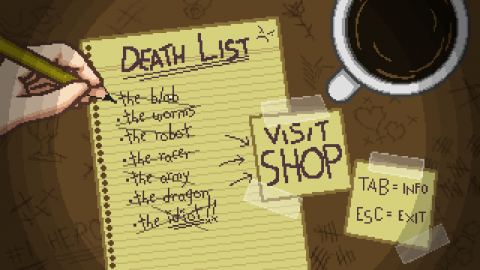 It presents a minimal story that isn’t really a story until the last level. The world has six heroes in the form of giant monsters and robots, and a young girl named Wryn wants to be the newest and greatest hero. So, she decides to go kill all the other heroes because violence is usually the quickest solution to any problem. In a twist, though, a guy only seen at the intro cutscene steals all the glory, leading to Wryn having to take him down on worldwide live broadcast at the hall of heroes. There’s a hilarious sense of black comedy here, with all sorts of hints that you’re actually playing a villain, or that the entire hero system is designed around making violent spectacle of monsters and glory seeking jerks. I mean, you are out to kill the world’s greatest heroes to become the greatest of them all, so maybe there’s a flaw in how these people view what heroes are. Outside those very few story bits, we get informed to Wryn’s personality through the quips she gives at the game over screen, usually breaking the fourth wall a little, and outright demolishing it when you beat the story mode to thank you.

It’s really all an excuse for the game proper. The main story has you going through seven different levels and bosses (not counting the many midbosses), and performing well can give you lots of cash to spend at the shop for new weapons and other such goodies. You can also play arcade mode and try to clear the game with one life, or take on multiple bosses at once in challenge mode. The game is also co-op, so you can invite a friend to play along (having a gamepad helps out if you’re playing on PC). Where Bleed tries to set itself apart is its free directional shooting and slo-mo mode. 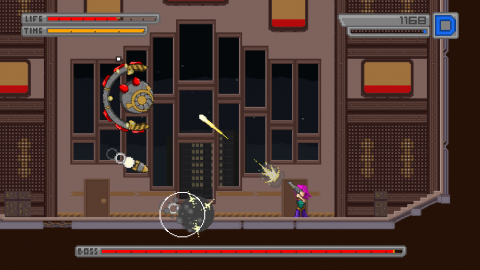 With gamepad or controller, you can flick a stick to shoot in any direction, while you use a mouse if you’re using a keyboard set-up. Your character will fire their weapon in whatever direction you want, no matter their position, even while moving. You can also dash in the air with a special move, wall jump, and slow down time itself to get a better shot at dodging coming attacks or hitting the enemy before it can make its next move. Slo-mo also becomes important in little segments of levels that need you to avoid special obstacles, like the warning lasers in the Robot’s base. It gives a bit more variety to an otherwise simple mechanic, and if you want to even have a chance at surviving harder difficulties, you must absolutely learn to use that slo-mo power properly. It is a survival necessity.

This is all fine and dandy, but Bleed may be a little too basic for its own good. The entire style is recycled, which is a part of the joke, but makes it harder to really make the game memorable. Every single character and boss is stock and the obstacles are all borrowed from older titles. Even the slo-mo mechanic isn’t particularly fresh, used more creatively in titles like Viewtiful Joe. That district lack of identity keeps Bleed from being something worth remembering, which is a real shame because it shows a lot of charm at points, though all those points are just saved for the final part of the game. Would the humor really have suffered that much there were more creative bosses besides giant worm or blob that turns into smaller blobs (and there’s actually two different versions of that boss)? Indie games mostly survive off of their individuality, not just the strength of their mechanics. 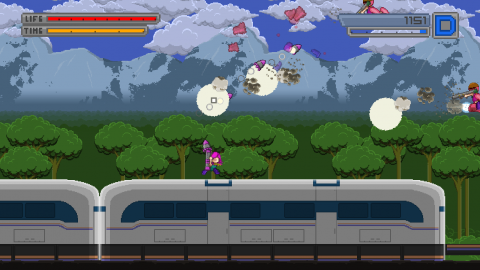 Yet still, the game is a modest title, with a very short main campaign. It’s a fun little game if you want to see how the new blood are handling 2D run and guns, but it’s far from being any sort of memorable classic. It needed to step out of the shadow of the games it was emulating and really become its own thing. Maybe Bleed 2 succeeds at that…