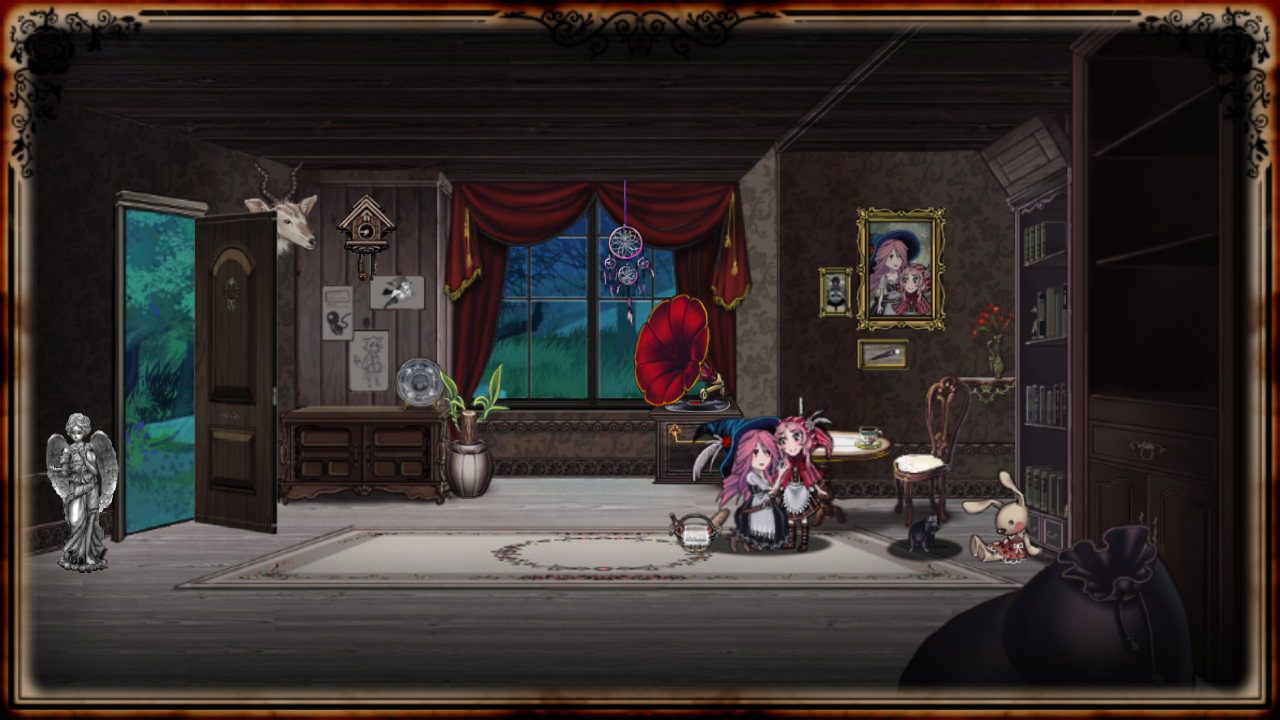 Witches are popular enemies in video games, but as playable characters, they’re a little more rare. One of the only ones where the player did or could play as an attractive, mature witch was Dragon’s Crown as the Sorceress. Sure there are some games where you play as an old ‘hag’ type witch or a young ‘cute’ type witch, but very few games where you play as an adult witch. A search across Steam later and the one title that was about an adult witch that wasn’t the enemy was Wicce. 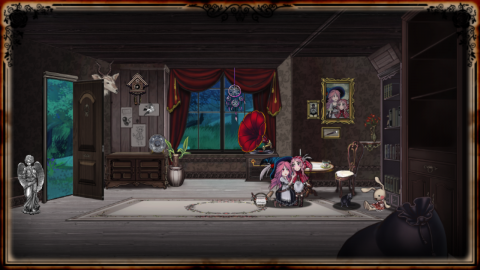 Released in May of 2016 and developed largely by a single independent Korean developer who credits themselves as Alpheratz*, Wicce is a short action platformer that stars the titular witch as she sets out to find her daughter on a night where an outbreak of a spectral plague has occurred.  Utilizing her talents and abilities as a witch, Wicce must contend with the manifestations of the plague that now roam the countryside and the nearby city in order to achieve her goal. Along the way she will encounter people who have contracted the plague. Further complicating matters, the pope learns of her presence and orders his soldier to capture her to be burned alive.

The game is presented in a very show-don’t-tell manner as there is no dialogue within the game itself other than some simple sound clips. The story is told entirely through the actions of the characters and for any statements that they would make, a dialogue bubble with pictures will instead convey the idea.  This is likely because of the one-person nature of the game’s development to minimize the need for translation and it’s a good thing it is. The ad copy on the Steam page is very machine-translate with such gems as “Epidemic makes people fall down and appears “Death”,” and “Follow her, enjoy your journey the middle age with full of death.” 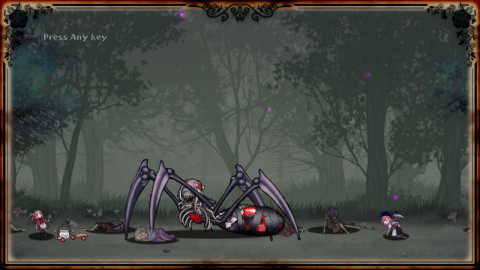 Playing the game is simple enough. Present are the platforming staples of double-jumps and slides. Wicce uses her broom to perform her basic three-hit combo which has impressive range due to emitting broom-beams as she swings it. That’s not all, however, as Wicce will ride her broom for air-dashes that can carry her for quite some distance, at least a whole screen-length if not more. Holding the attack button will charge up an attack that can only really be described as a holy ball that will chase the nearest enemy and continue to damage any hostile it comes into contact with. Her last ability is the usual ‘lose HP to heavily damage everything near you’ move that most beat-‘em-ups feature. However, this ability has a twist. At the cost of her own health and wellbeing, Wicce is able to heal others around herself.

Within the areas of the game that are a bit difficult to describe as ‘levels’ given their arbitrary length are a smattering of hazards. There are the plague-monsters as well as a variety of hazards such as spikes, saw wheels and death-pits.  Death isn’t a monumentally large concern as dying to a pit will result in a respawn at the last checkpoint, usually the start of the current map. Death by health-loss will bring up a prompt asking the player if they wish to respawn. In either event, Wicce will have the health she had when the checkpoint flagged, or have ¼ health, whichever is higher.

Also present are various jars, barrels or other breakables that contain treasures, healing gems or collectibles. Once per level-set is a stone tablet that, if found, will provide Wicce with a magic seal. There are also the plague-stricken people that have not yet succumbed to the plague itself. Upon approaching one of them, a timer will begin to empty. Should it do so their fate is certain and Wicce can even strike them down herself to put them out of their misery.  Should Wicce sacrifice her health and use her special move near them however, they will be cured of the plague and survive the night. There are a few hidden passages here and there that will provide treasure-breakables and shortcuts. However, in a few such passages is the ghost of a young child who will share visions of the time before the night began. The game features three endings that depend on the actions of Wicce over the course of the cursed night. 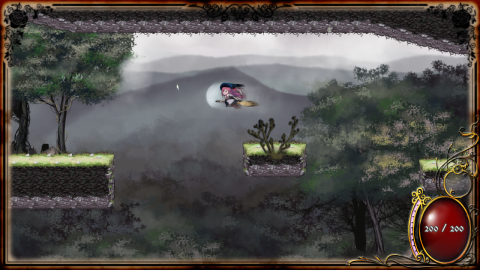 The game features a handful of bosses, most of which are introduced with a small cutscene that will provide a tip to defeating it. Most will escape the first time Wicce defeats them only to return at the end of a level set with greater strength and more moves to bring to bear against the witch. Should Wicce be in possession of the level’s magic seal, upon the final defeat of the boss she will bind it in chains and seal it within paper with a simple quick-time sequence, elsewise they will escape and continue to ravage the land.

Wicce attains a visual distinction. The levels themselves are fairly basic and filled with a few too many right-angles. The settings of the forest, the city and the underground aren’t especially inspired locations, but they serve their purpose. What sets the game apart is it’s rendered in a paper-doll animation style.  While such animation techniques have a degree of infamy, such as Earnest Evans’ ridiculous puppet crumpling; There is the other end of the spectrum to consider with Vanillaware’s offerings of Odin Sphere and Dragon’s Crown to legitimize the technique. Wicce more closely emulates the latter, though the one-person nature of the production shows with more than a bit of jankiness that is far more noticeable in cutscenes than in gameplay.

The soundtrack is comprised of 19 compositions and is largely the reason for the ‘almost’ in ‘almost one person production’ as there are three people who contributed to it which includes the head-dev.  The musical styles manage to cover a fair deal of ground; from gothic themed violin pieces, to music boxes and heavy metal for the more other-worldly encounters. Each conveys a distinct mood appropriate to the situation at hand. No track is repeated beyond its relevant use which ties each piece to a situation, leaving it closely ingrained to each moment. 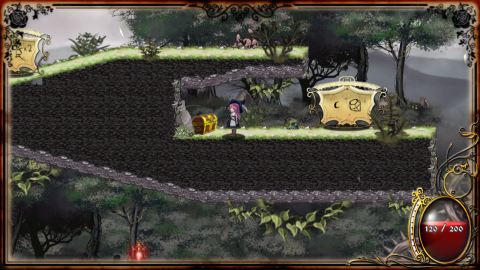 Collectables are attainable within the levels and are purchasable upon starting a new game with money found over the course of the game after the game has been finished at least once. What these collectables unlock vary from ‘mascots’ which are small static character images that sit near the HUD information;  decorations for Wicce’s house; official art; the soundtrack and even concept sketches.

Clearly designed with speed-running in mind, the mechanics are simple to approach but with enough depth to break out some tricks. Complimenting this, there is little in the way of time-wasting content. The level-structure is also largely set up to cause the sickly civilians to require going just a bit out of the way, necessitating a small degree of exploration from the casual player and optimal routing from the more timely-minded. A casual run of the game likely won’t take more than an hour and an experienced player can practice the whole of the game in far less than even that.

Wicce is a game that shines strongly from it’s short-and-sweet nature and covers ground that isn’t often dealt with. A recent trend of gaming, largely spearheaded by the western release of Nier and popularized by The Last of Us, has been of the father in pursuit of or in protective custody of a child, often a daughter. With the exception of the occasional and often dissonant allowance of a create-a-parent, such as with Fallout 4, examples of the concerned parental figure willing to go through hell for their young or analogue thereof has almost skipped over mothers entirely. Meanwhile, witches as a theme are often used to showcase something negative, much like the hunts that coined the term and cemented the concept. It is typical that a witch is an antagonistic entity. Old, haggard and spiteful towards civilized peoples. If not this, then the seductress brand of witch is the trope to fill the role, present to tempt good people into bad decisions for her own selfish satisfaction. 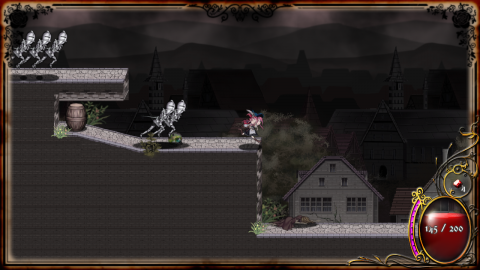 Heroic examples of witches are few, most of which consist of children. This dulls the persecuted history of independent women with a sense of innocence to soften the idea, as a cute little girl does not readily bring to mind atrocity. Rare is it to see a depiction of an independent woman that carries the iconography of one of the greatest injustices in human history cast in a role that brings positivity to her person and position. Wicce is a small, short, sweet example of the kind of thing that deserves more time in the forefront of gaming and media in general.