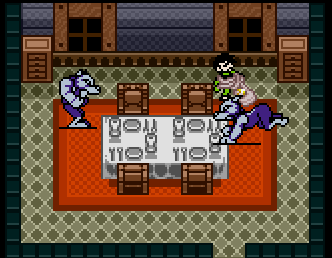 The third installment of the series was released more or less at the same time of the arcade sequel. This game however is a spin-off that has pretty much no relation either to the original coin-op or to the sequel: it’s an overhead action/shooting game with slight RPG elements and an overall feel of dark gothic fantasy instead of the horror/science fiction hybrid of the previous titles. It also was developed by Noise Factory instead of SNK.

This time “Beast Buster” is meant to be a title, referring to those who are able to enter the spirit/demon realm; the titular “Dark Arms” is the name of an extremely powerful weapon that needs to be crafted in order to wield it against the creatures of said realm. The player character starts in the abode of the grim reaper-looking fellow known as Caso the Shuten Master, who gives us a weapon named Catcher. It is needed to, well, catch the souls of the creatures roaming around, which are then turned into “food”. You can’t just spam the attack button though, since it drains the power bar, that replenishes itself slowly; however, soon you’ll gain several more modes of attack. 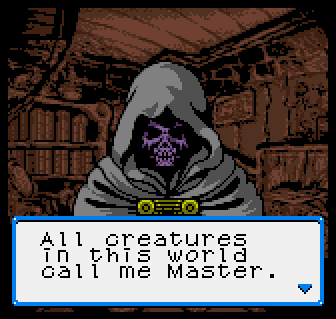 The first mission the Master gives us is to retrieve something called “seed” from a dungeon; said seeds will be combined by him in his house (the main hub of the game, as you’ve guessed) with other items called “oum” to forge new weapons. These will be leveled up by defeating enemies and gaining experience points: in fact, interestingly enough, the XP are used to make not our character, but his weapons, stronger and also less prone to drain our attacking power. The Master also provides us with a bed for sleeping, to replenish energy and also activate the day/night cycle. The cycle is not just for show, though, since some enemies only appear at night (for example some human enemies turn into werewolves) and sometimes it is needed to progress the plot. But what about the food? It’s used for the crux of the game: evolving weapons. 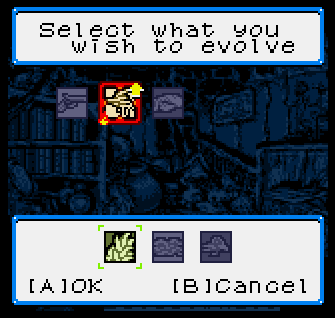 The gameplay boils down to: finish monsters with the Catcher (said monsters are then added in a database you can consult freely), craft weapons with the seeds and make them evolve by giving them enough food, for a grand total of 31 obtainable unique weapons with their abilities and sometimes elemental properties (the usual fire/water/electricity triad). They are sufficiently varied, between guns, shields, mines and more unusual stuff, such an AKIRA-esque hand tentacle or exploding doppelgangers. A few weapons even have different evolutionary paths. This is an interesting system that, coupled with the smooth controls and simple interface, makes the title an enjoyable experience. It doesn’t disappoint from the artistic standpoint, either: the sprites (the usual staples such as skeletons, ghosts, living armors, evil clowns, etc.) are all recognizable and distinct despite the handheld’s simple pixel graphics, they have some amusing death animations and stand out from the background tiles thanks to good use of colors. The Castlevania-esque spooky BGM also help make the overall gothic feel more pronounced. 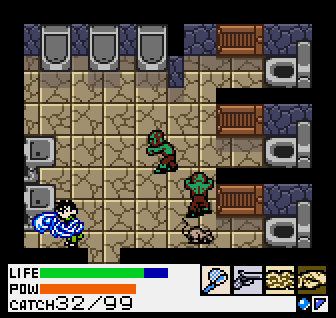 Unfortunately Beast Buster 1999 has a big flaw: it’s way too short and easy. The monsters respawn continuously, thus providing an almost endless source of food that can be used to evolve the weapons in no time. There’s no reason not to obtain early the weapons’ most powerful forms, making most dungeons a breeze, unless one is a completionist and wants to see all the possible forms. There are also just four small main areas plus a bonus dungeon, that amount to just a few hours of gameplay, unless again one wants to complete the monsters database (probably inspired by the Pokemon craze that was sweeping the world). And while there is a plot, it’s too thin and inconsequential for anyone to care. The other added feature, one-on-one combat between different players, was available by linking two Neo Geo Pocket Color with the provided cable, but the system’s poor sales made sure that few could experience it. 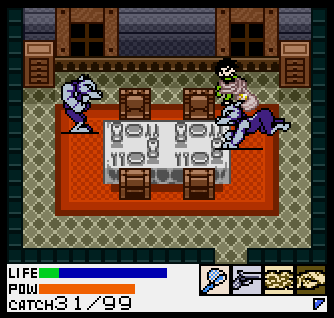 In the end a potentially interesting game was doomed from the start because of the console’s obscurity, and it would take SNK 15 years before tackling the series again, but leaving this RPG an isolated experiment.