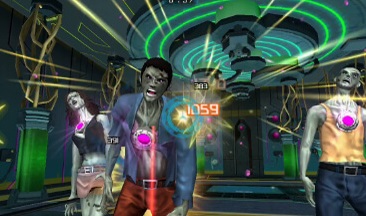 During the New Tens mobile gaming, especially in Japan, garnered a lot of attention, so SNK Playmore decided to resurrect (pardon the pun) the series by developing a shooting game for Android and iOS smartphones, in the occasion of the brand’s 25th anniversary. The gameplay has, of course, been adapted for mobile, where you move the “camera” by swiping the left side of the screen and shoot by tapping the right side. Every zombie/Beast needs to be shot in their glowing core for massive damage, while hitting them in the head stuns them. You also now have to reload manually, just like in Second Nightmare. This time however there are also a RPG-like experience points system and an in-game shop where you can buy more powerful weapons and items like medikits and grenades. The gore has been drastically reduced, though, probably as a means to avoid age restrictions for the app. 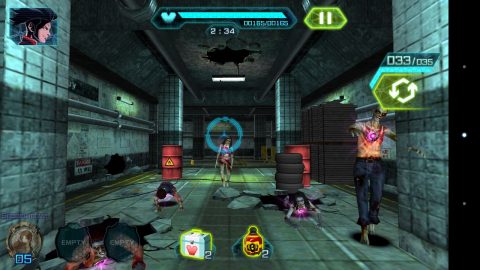 Knowing that many players may not even have heard about the older games, SNKP decided to combine this title with the massively more popular King Of Fighters franchise, which itself was on its 20th birthday. While the idea of KOF characters punching zombies and mutants to oblivion is surely awesome, they don’t actually appear in the game (save for playable guest star Kyo Kusanagi), leaving the spot as player characters to the Strings siblings, Jin and Lisa, “cool” manga-style over-designed teens. The support characters are more in line with the American comic book aesthetic instead, while also falling in cliches such as “old mad scientist”, “big angry black guy” and “busty spy in tight catsuit”. Actually, the KOF people only exist in the game as “Fighter Cores”, that is, emblems that grant a variety of stat modifiers and bonuses to the players after being equipped or activated.

Like almost every nominally free smartphone game, there are actually a lot of in-game purchases: while the lesser Cores can be found fairly easily, the strongest ones take a lot of time and effort to be obtained, not to mention big amounts of in-game currency (Coins and Medals), which in turn can be bought with real-life money. Others can be obtained only by fusing two or more Cores or by winning them randomly in daily raffles. And of course you’re going to need them, since the game starts fairly easy, but then the difficulty escalates quickly, much like the original coin-op. 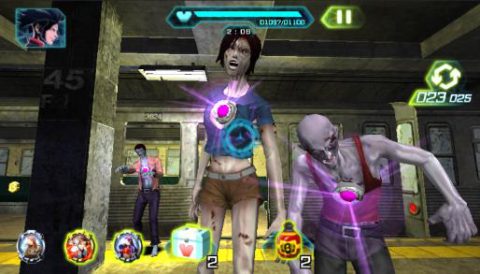 In fact the whole game seems to be something of a 3D adaptation of the original, with a similar progression: you start underground in a subway, then move to the dilapidated city streets and finally to the labs where the evil organization is creating the undead for their sinister purposes. The bosses are usually just slightly larger zombies, not strange hybrids or creatures; however, in a typical example of the series’ comic book absurdity, new updates included undead versions of historical figures such as zombie Napoleon or zombie Cleopatra. 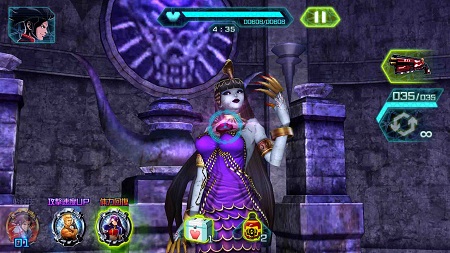 The game seemed to be tailored to the tastes of the mobile gaming crowd: the gameplay is still the same mindless one from 1989, but perfect for something that has to be played on the fly in short bursts. Players could be hooked by the achievement system, online leaderboards, Twitter integration (that Japanese players seem to love), and the hunt for the most powerful Cores. It also has something for the old time fans: the hard rock soundtrack, overdone designs for player characters and emphasis on explosions and “cool” effects all go towards the same “American” comic book aesthetic of the precursor, and it’s up to the player whether to take it seriously or not. Despite all this, SNKP still couldn’t garner much interest about the franchise, probably because of the over-saturated mobile gaming market and the bad rep freemium mobile games started to gain in the meantime. In the end SNKP shut the game down on August 31, 2015, removing it from every online store. So, this makes two games in the series that are no longer available.
However, it still received a spin-off in the form of a pachislot machine in 2015, back when SNK Playmore still produced this kind of stuff.

The life of the series now is most likely over, even now that SNK has recovered from its Playmore days. But, even if zombies are now a staple of popular culture, Beast Busters never has been (and it would be probably seen as a House of the Dead ripoff despite coming first), so it’s doubtful that gamers would even be interested in a new installment.